HOW DOES A LEAD ARTISAN RESPOND TO THE KING’S PROPOSAL? 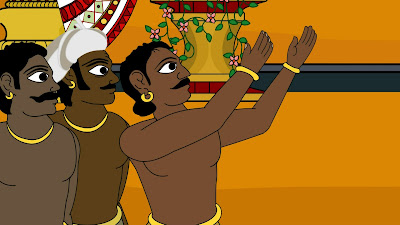 This blog continues where my 1.13 post left off. Here we see that the artisans who have been called to the Chola king’s court have dutifully traveled all the way from Ponnivala to appear before him. The audience of onlookers fills the room. Representatives of those 56 powerful agricultural families mentioned in my last blog are surely there. Territorial rights are very important to them and they want to see the king back the farmers in the stand-off they expect to witness between their King’s nine loyal ploughmen and the Ponnivala delegation.

The king starts with his well-chosen words of praise for both sides. His own workers are skilled ploughmen whose skills produce neat furrows that form straight lines. Their work produces much wealth (a matter of key interest to him) and their presence will cause the land (and his economic networks) to flourish. By implication the audience understands that the pre-existing way of life in Ponnivala is neither neat nor very profitable (for him). Nonetheless he praises the artisans for their skill in making beautiful and useful things, items such as ox carts, stone carvings and jewellery. The king sees these two modes of livelihood as “best kept distinct.” He is not talking about caste differences (marriage rules and food exchange matters) but strictly about the means of production and of payment. When his friend and equal speaks next this interest in the social foundations of his economic system become clear. This high-status associate (likely a Pandiya or Cera king from a neighboring territory) makes it clear that these three rulers want to see a polity where the artisans are service providers. They are to make things on demand and be paid accordingly. Implicit in his statement (as we will see spelled out further in my subsequent blog posts), there lies a broad economic vision: the farmers will produce food while the artisans will be skilled manufacturers essentially doing piece work. The farmers will be expected to hand over agricultural produce, in fixed quantities, to artisans in return for their goods and services. These payments will be measured and countable.

The artisans understand, of course, but they cleverly do not reply to these kings using the same framework. They know that, in this worldview, handing over objects they have manufactured in exchange for fixed payments will be demeaning. It will lower their social standing. Instead of being proud and independent, as they are now, that they will become like servants. They will become subject to the whims of the farmers’ need for specialty items, and even to their willingness to “pay.” So the artisans speak of their existing identity, their residence in and control of a known territory: Ponnivala. This is a political argument, not an economic one. In turn they speak of their social identity vis-a-vis the Chola’s ploughmen. Speaking from the perspective of these current Ponnivala “rulers” these men are outsiders. The Chola’s farm laborers are without territorial claims in their beloved and beautiful area. The lead artisan, who speaks for all of his colleagues, then adds a little taste of insult, a social put down that reflects his own feelings of superiority: These men, he blurts out, are nothing more than a “hungry and impoverished” bunch of ploughmen.

The argument last for three days but the artisans will not back down. Finally they stage a “walkout.” The king and his supporters are left in turmoil. What should they do now? The Chola’s decision about what to do next about this intractable problem will be discussed in my next blog.