WHAT LAND GRANT PROPOSAL IS THE KING DISCUSSING? 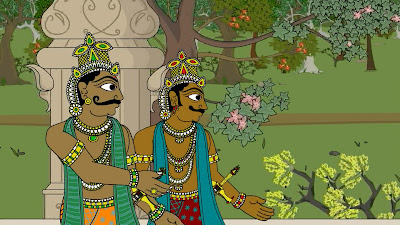 Again, like the last few video clips (blog 3 1.11 and the several postings preceding it) this Legend of Ponnivala excerpt is quite simple in its basic construction. This makes it a good “teaching clip” for younger students. This particular scene conveys just one key message: the king has had a very prosperous growing season. The harvest has been abundant. The fields are lush and green. The king’s explanation for all this beauty and wealth around him is straight forward. He attributes it all to the skills and hard work of the nine farmer-brothers from Vellivala who happened to seek out his goodwill sometime back, because of a drought in their own Vellivala region. He had agreed to hire them and clearly he now feels that he made the right decision. Somehow these men’s presence was auspicious. They had brought him good luck. In exchange the Chola king wants to show his gratitude by giving them land in an area called Ponnivala. We have not learned much about this area from the story, yet. But Ponnivala must lie at some distance (upstream) and the king must have a reason for choosing this particular place. Likely his reasoning has been influenced by three (unspoken) factors: 1) He trusts these nine men to work hard, 2) He believes they will make good envoys who will be loyal to him because he has shown them generosity and kindness, and 3) He hopes these men will help fulfill his broader ambition to expand his own territorial influence and thereby further enhance his own good name. Clearly this king believes his generosity will make a good impression and solidify the bond he now has with these men. He is in the process of transforming them from loyal workers into loyal political allies.

There is also a possible incongruity in the king’s reasoning. Why did these men’s earlier farming efforts in Vellivala come to naught if these men are all such good farmers, and when their presence the king’s own local area has been so helpful? Why did the first situation end in both drought and a terrible famine, while in the second there is record prosperity? Could could these men have brought abundance to the Chola’s lands, but have failed to do the same in their own homeland? The story is mute on this important point. However, one possible explanation may be that the big drought in Vellivala was due to trying to farm this “Eden,” a place of forests and the story’s own primal landscape. Maybe Eden is a place of “nature,” without farms and without ploughs? There is a certain amount of evidence from details that surface later in the f=story to suggest this interpretation and way-of-thinking. And, furthermore, there is no goddess temple ever mentioned, neither built or pre-existent, in Vellivala. These men did not worship their creatrix, nor did they build a temple honouring one of her multiple earthly stand-ins. They could have chosen from an abundant pantheon of Hindu village goddesses to worship, all of whom are understood to be earthly “reflections” of the goddess Parvati herself. Perhaps the men were deficient in not doing this? Or, from a more secular standpoint maybe, these farming men needed to “make contact” with a wider society outside of their Eden, their birthplace? Maybe they needed to find a king and gain his trust? Maybe plough-based farming is not something wild and natural but rather a way of life that better suited to large-scale settlements, business, trade, hierarchical relationships and a more sedentary life-style? The story is silent on these much wider but obviously important issues. Where there is silence... we can only speculate.