More On The Boar! 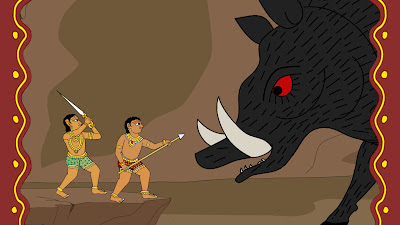 As we’ve been looking all last week at the interesting similarities between the Calydonian Boar Hunt and King Komban in The Legend of Ponnivala, more and more symbolism about this remarkable creature has been coming to light. The boar has long been associated in many old-world cultures with strength and courage. Yet its habits--eating just about anything with a voracious appetite--have also made it a symbol of darkness and fear. A bull or a boar might kill a man, but a bull is unlikely to eat him...a boar just might.

In fortitude and courage the boar is unmatched, and it’s perhaps for this reason that Vishnu chose to take this form for his third avatar, Varaha, in order to battle and subdue the demon Hiranyaksha. Hiranyaksha had taken the earth to the bottom of the cosmic ocean. After battling the demon for a thousand years, Varaha was victorious, and carried the earth between his tusks to place it back in its proper place in the heavens.

In episode 24 of The Legend of Ponnivala, the servant Shambuga tells the kings of Ponnivala that the boar Komban is “the god of death himself.” This suggests that the boar might actually be Lord Shiva, or at least a symbol of his destructive power.

But what of other instances where the boar has become a mainstay of traditional culture? Well, if we can consider that there is a parallel between Artemis, the huntress in the Meleager story, and Kali, the goddess who comes to the aid of the hunters by giving the boon of a giant boar/son to the little sow, the mythology becomes quite universal.

For instance, there is a direct correlation between Artemis in Greece and the Roman goddess of the hunt, Diana. To Artemis, the hart (deer) was a sacred animal, but twice she called on a boar to do her dirty work (once to kill Adonis for his infidelity, and again to punish the farmer king Oeneus for neglecting her in the harvest sacrifices).

Diana’s representative animal is the hart, but her precursor from Gaul is another story. The goddess of the Ardennes forest range (covering parts of Belgium, Luxembourg, and France) was a huntress named Arduinna. A true Celtic goddess, Arduinna’s love of the wildwood, her role as protector of hunters and of animals, and her association with purity and the moon, were all adopted into Gallo-Roman mythology and became Diana, under which name she continued to be worshipped by pagan Europeans for centuries. As Arduinna however, her favoured beast was the boar, which she rode on the hunt.

The Norse goddess Freya also kept a boar for company. Freya was the Norse goddess of fertility, love, war, and death (all aspects associated with the other goddesses mentioned above, including Kali). She also ruled over the afterlife field of Folkvangr, where half of those who died in battle were said to end up (the other half went to Valhalla with Odin). Her boar Hildisvini (literally “battle swine”) was a constant companion and a powerful ally in battle. It is also thought that Hildisvini was Freya’s mortal lover, Ottar, in disguise--a notion which prompted Loki to suggest that she was always behaving inappropriately by riding her lover everywhere she went! (This was also an insult to her husband, Óðr, comparing him to a pig.)
Posted by Ponnivala Publishing at 08:00