WHY IS THIS LANDSCAPE SO LUSH AND GREEN? 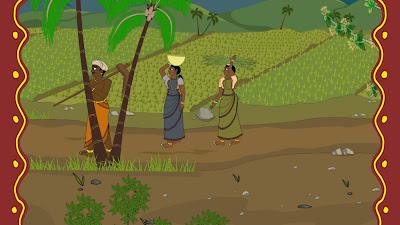 This Legend of Ponnivala video clip is representative of the song refrains the bards used to lend extra emotional feeling to the story. You can hear the words of the original song (and tune) in the background. An English translation has been superimposed to aid a non-Tamil speaker in understanding what is being said. It could be called a ”praise song” in that the song honours the Chola king and the lush landscape his well-tended fields represent. But there is a deeper message as well. The authority of the king is respected and his rule is considered just. Traditionally, in this area, the just reign of a monarch is reflected in the prosperity and lush growth of all that grows around him. It is as if the landscape itself is a mirror that reflects the happiness and contentment of its many subjects. It also acts as a metaphor that implies the king has honoured the gods (and especially the local goddess) from whom all prosperity flows. Finally, as we shall see in my next blog, the loyalty and contentment of the king’s key workers is another reason for the crops to be bountiful, and the fields to be full of moist beauty.

A healthy young crop of rice shoots is considered particularly indicative, in the Ponnivala story, of its local residents’ state of joyfulness. Rice-growing wetlands are therefore the especially highly valued. Paddy, as this crop is called before its harvest, is the most honoured staple of all. Significantly, paddy is not native to the Kongu area. There is a subtle but implied contrast to be understood here, between upland farming, where water is sparse and rice-growing areas downstream in the river Kaveri’s delta area. This fact is important to the story because The Legend of Ponnivala attempts to assert the independence of an upland region. The poets try hard to promote the equal beauty of their own landscape. But, truthfully speaking, this Kongu area is naturally less lush than the lands downstream. Rice is not easily grown here, even with modern pump-style irrigation in place. Interestingly, this truth is never acknowledged by the proud singers of this unique Ponnivala epic story!