On The Beauty of Tamil – By Brenda Beck 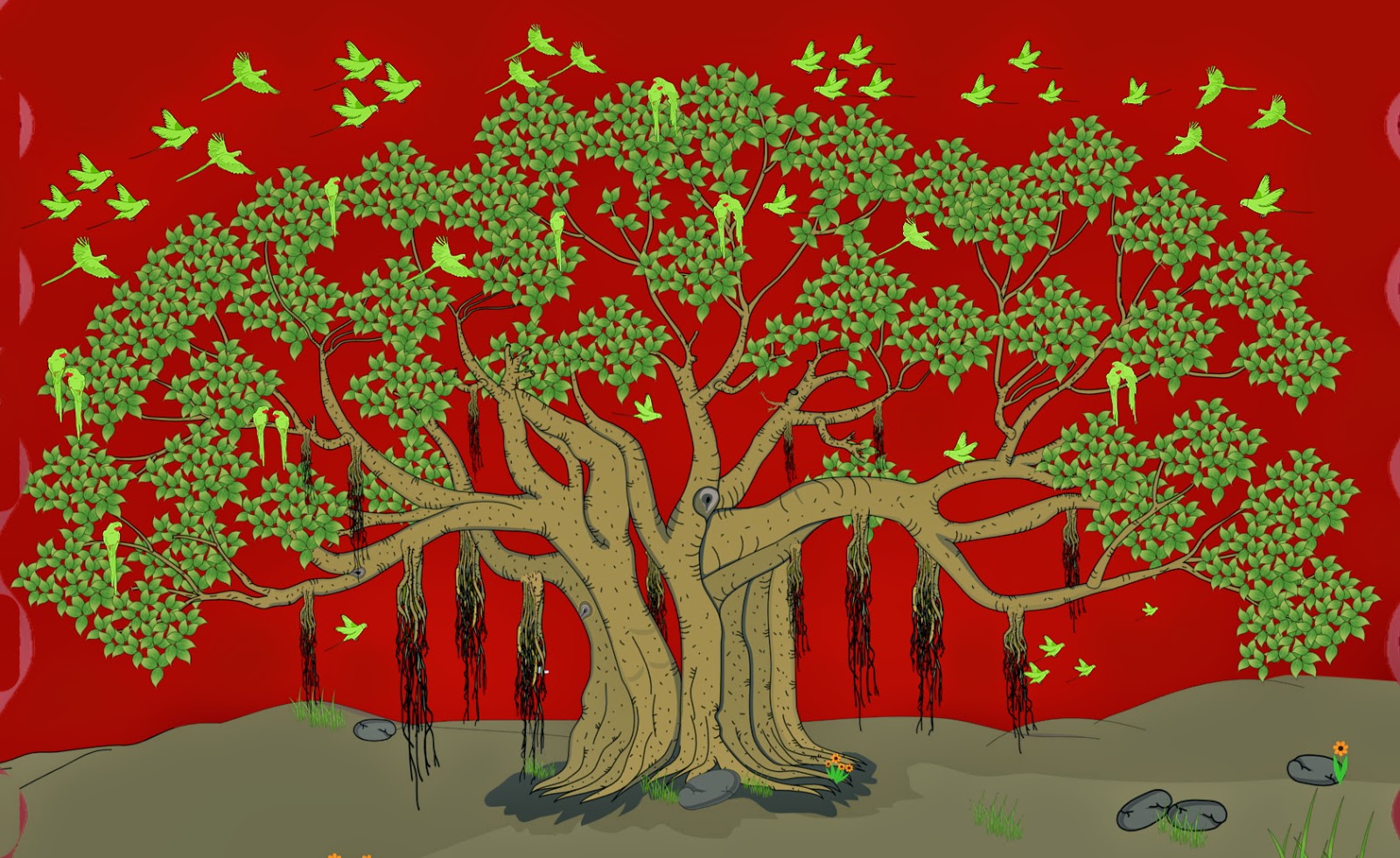 India is famous for its magnificent banyan trees. Their spreading branches usually cover a vast area. It is easy to imagine that these trees provide shade for people living everywhere across this broad sub-continent. In these beautiful banyan trees live many parrots. And parrots, of course, are famous for their ability to speak. A parrot will always answer the language it is spoken to in. One can think about each parrot as potentially embodying a different specific language. Each new parrot born in this great tree potentially learns to speak the language of whoever befriends it. 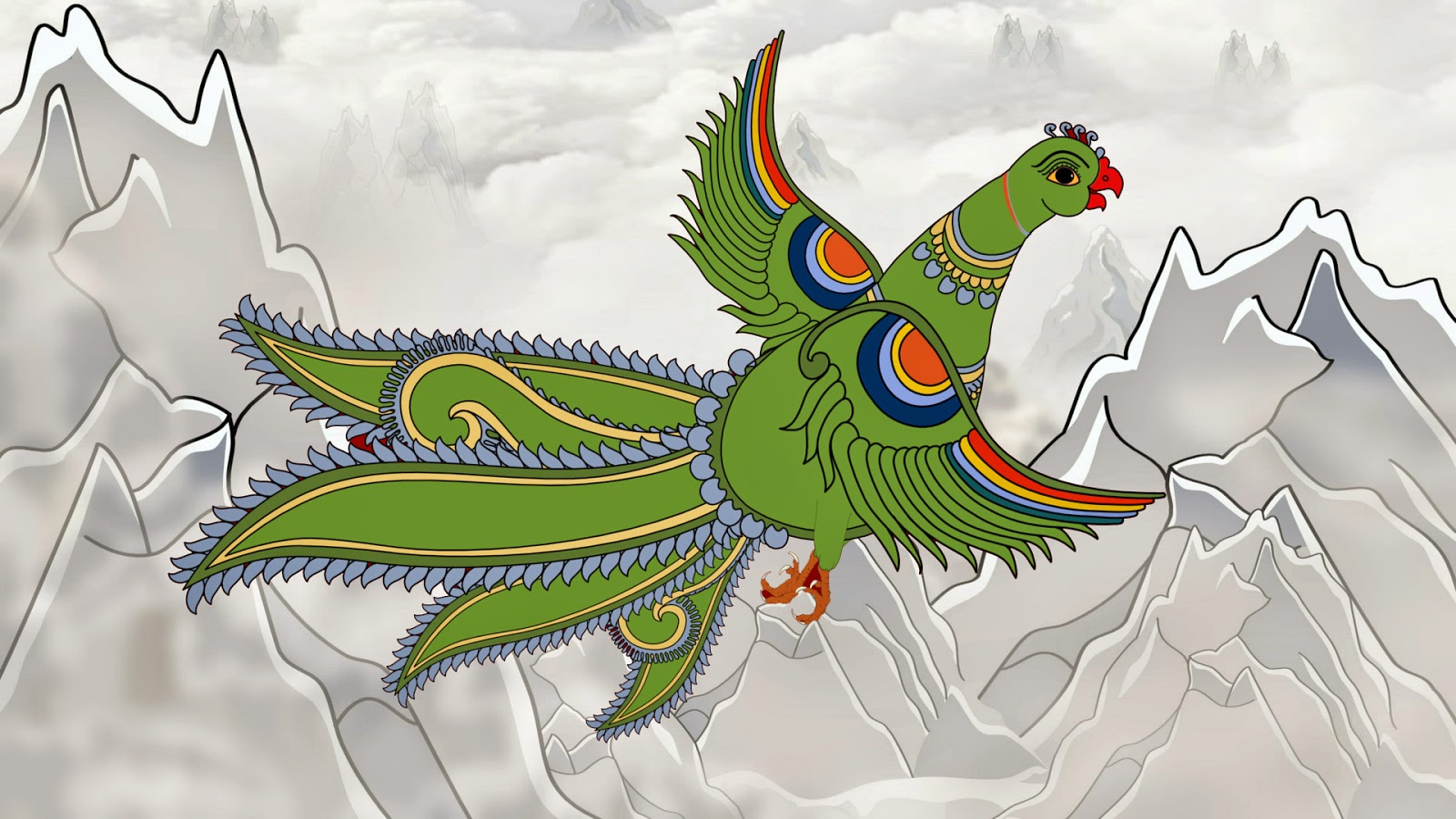 Once, within this large flock, there was one especially beautiful parrot who learned to speak Tamil. Her name was Tamil Selvi. She was not born on earth, but rather high up in the Himalayas, in a place called Kailasa. This lovely bird lived near Lord Shiva’s Council Chambers and she had been taught to speak in Tamil by Lord Vishnu himself. Tamil Selvi’s wings were decorated with lovely jewels and both her feet and her beak were made from precious coral. 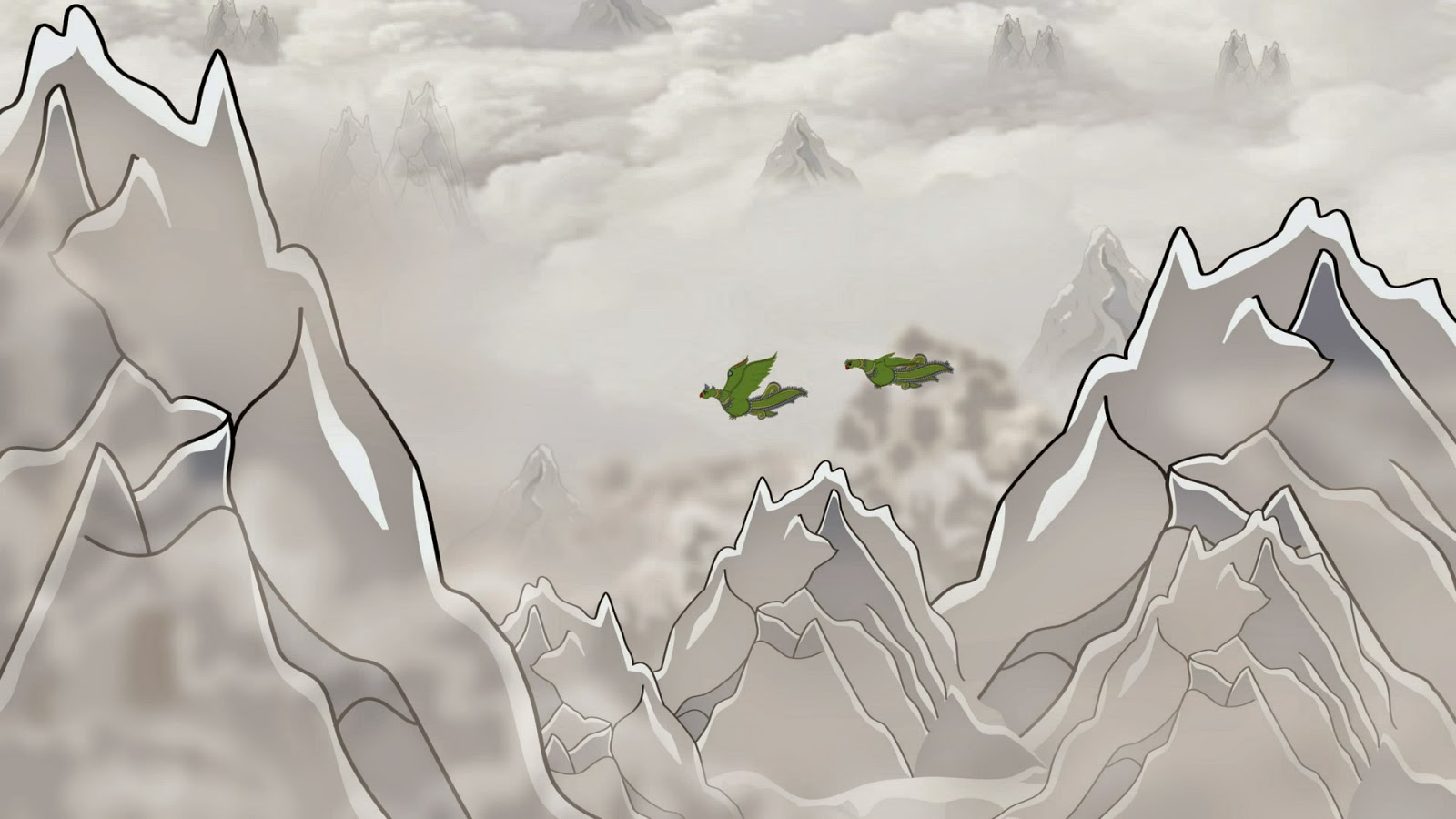 When Tamil Selvi was not learning Tamil she spent her time playing in the clouds with her friends. She flew with great grace and speed. All her companions loved to fly next to her while they explored the far reaches of the heavens above. 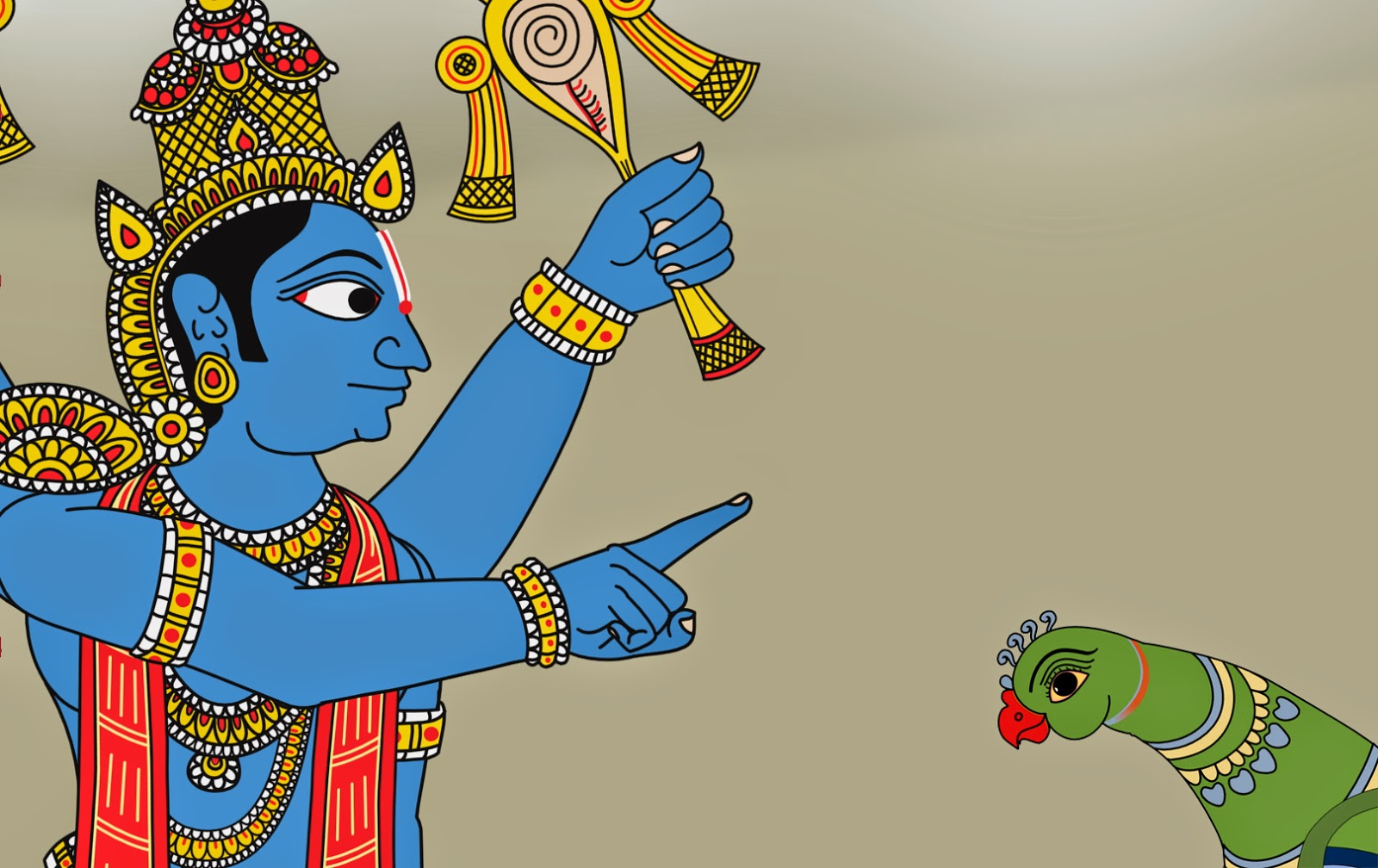 But then one day Lord Vishnu himself came to Tamil Selvi with a request. He asked that she leave her lovely home and fly down to earth for a while. There her job would be to try and help human students who were struggling through many difficult lessons, trying to learn Tamil. 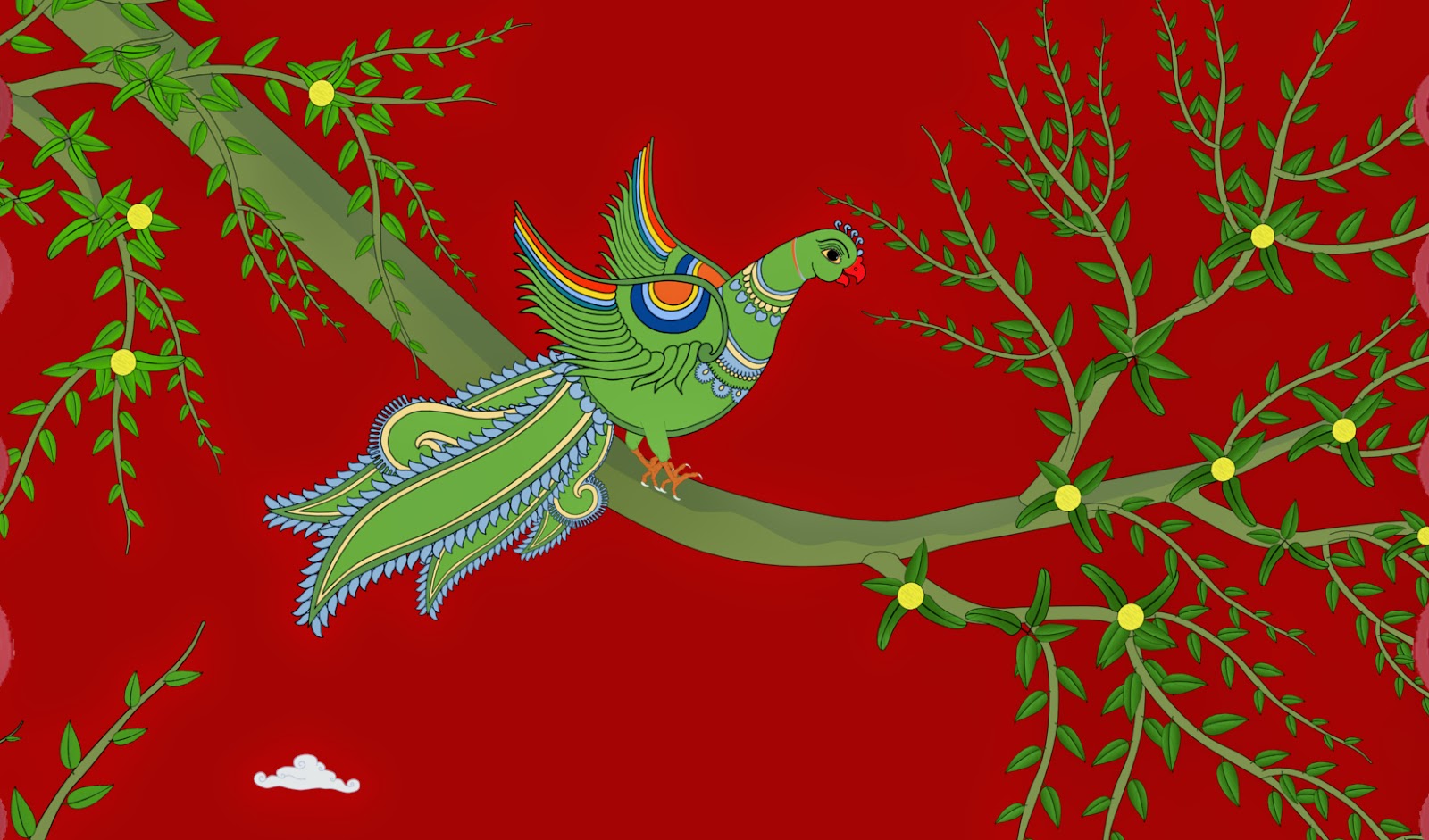 So Tamil Selvi flew down to earth. There she chose a home in a very beautiful banyan tree. She tried to be conscientious about her new job. She would exit from her nest in the trunk of that tree at least once a day and sit on her favorite branch, looking for people to help. 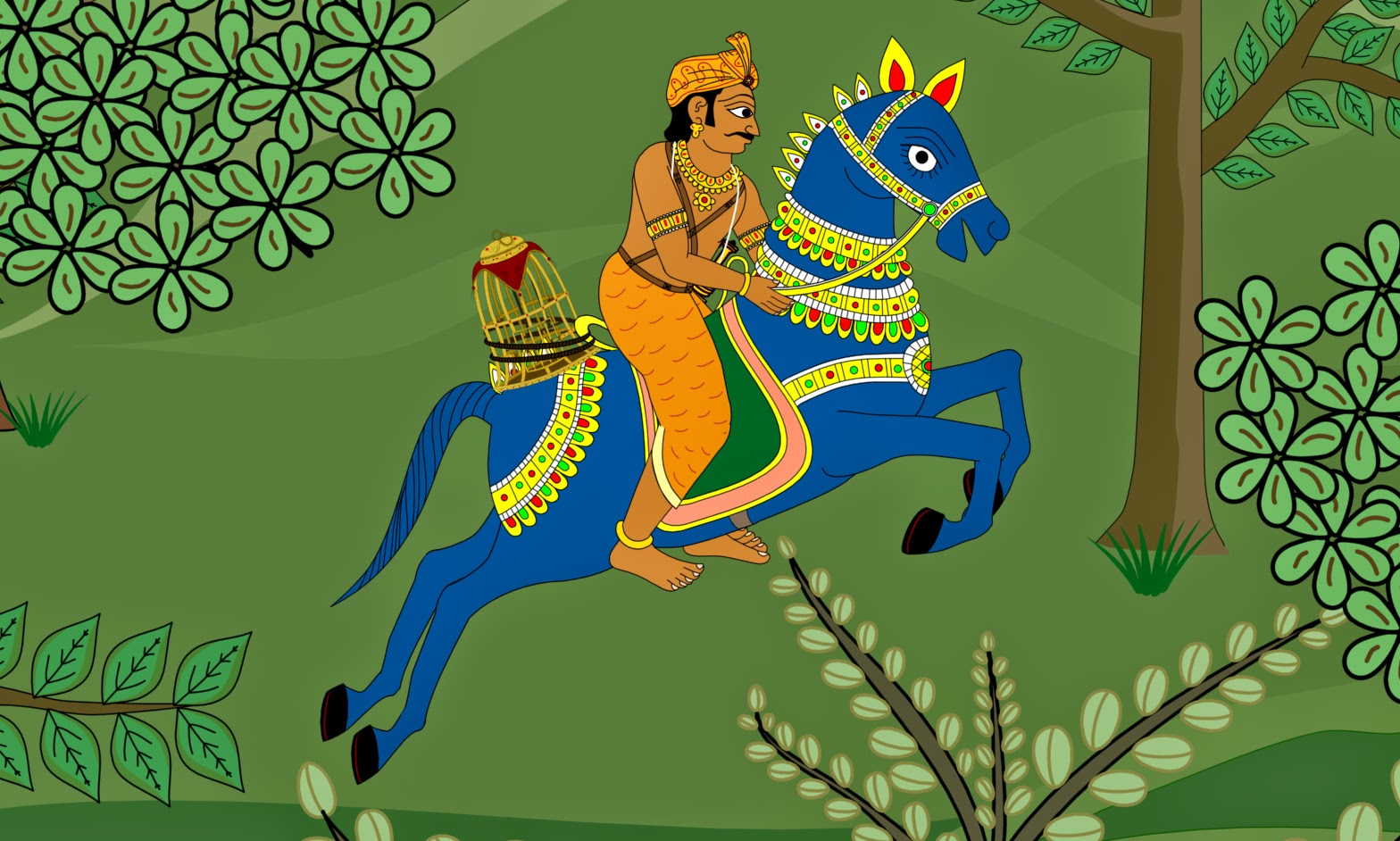 At that very time, and not too far from Tamil Selvi’s tree, there happened to live a Tamil teacher who was very keen to assist his students in every way possible. One day he had a dream that a lovely parrot named Tamil Selvi was living not too far from his village, in a big banyan tree. Perhaps this bird could help his students to learn Tamil. So the hard working teacher, a Mr. Anna Kumar, mounted a fine blue horse and set off to find the tree he had seen in his dreams. Behind him, near the tail of his steed, he tied a lovely golden bird cage. Anna Kumar planned to use this to bring Tamil Selvi safely back to his village so that his students could talk with her. They would enjoy speaking with such a lovely bird. This would be a good way for them to practice their Tamil...if only he could manage to find her! 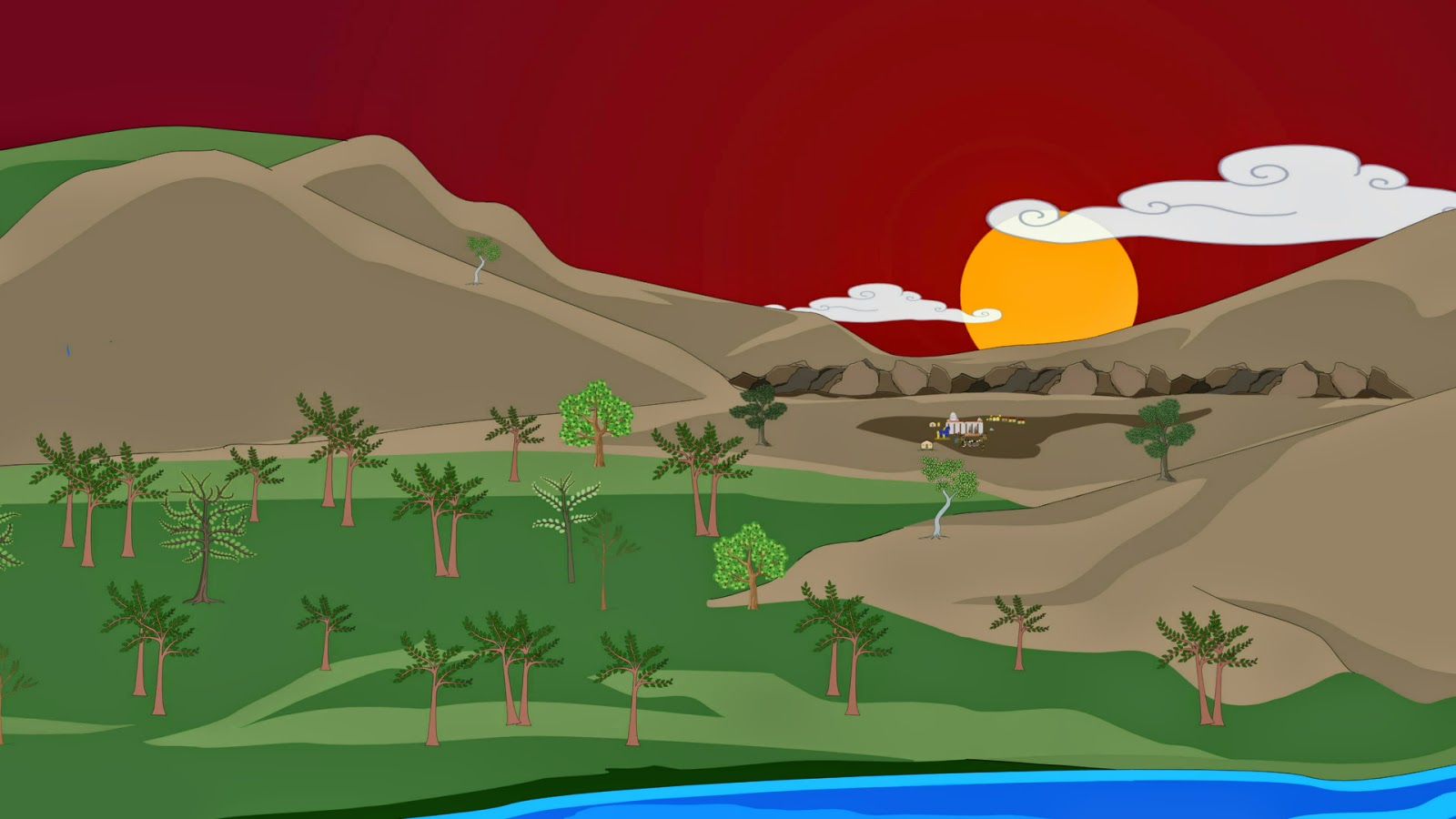 Anna Kumar’s dream had told him that Tamil Selvi’s tree grew right in the middle of a very dense forest. But he did not know where to look. There were several forests near where he lived! Nonetheless, he set off bravely and he took an assistant along to help him. Anna Kumar hoped his instincts would guide him to the right tree. 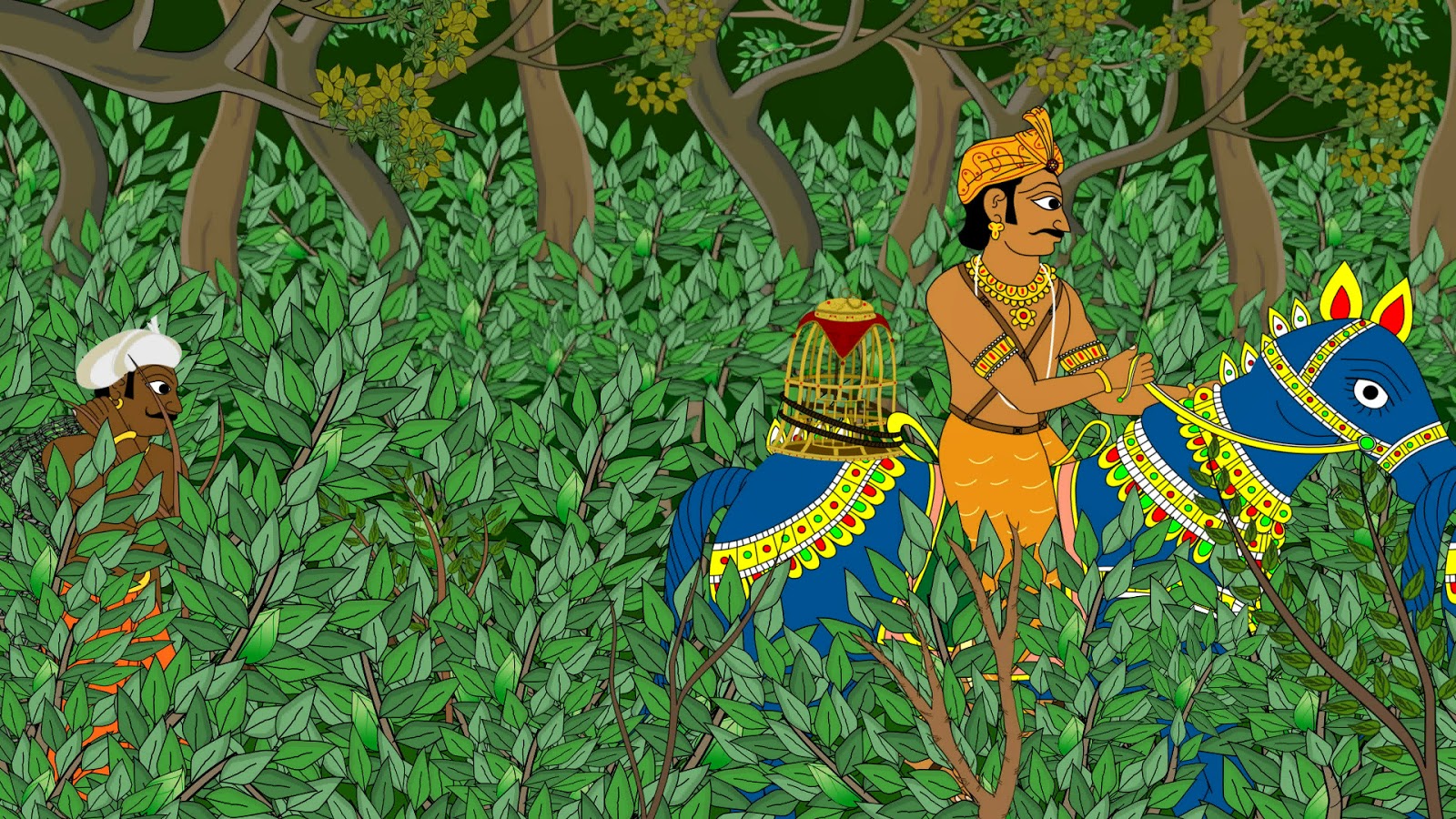 The two parrot seekers walked and walked. The brush was very thick and there were a lot of thorns. The job of finding the lovely Tamil Selvi would not be easy! 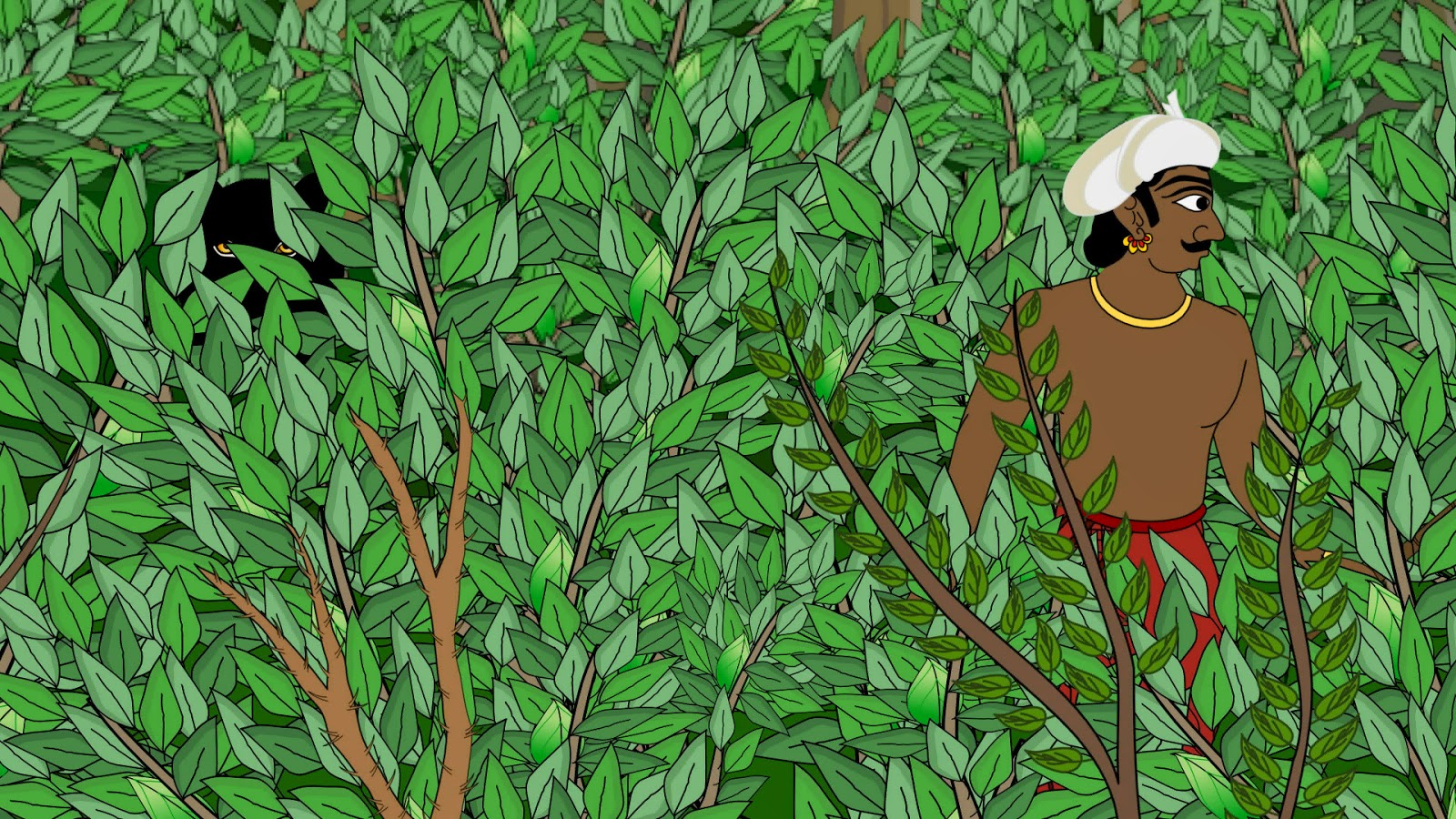 Sometimes shining eyes peered out at the travelers through the bushes. Anna Kumar and his assistant were a little scared. At times they wondered aloud to each other: Had they made the right decision to try to travel so far through an unknown forest? 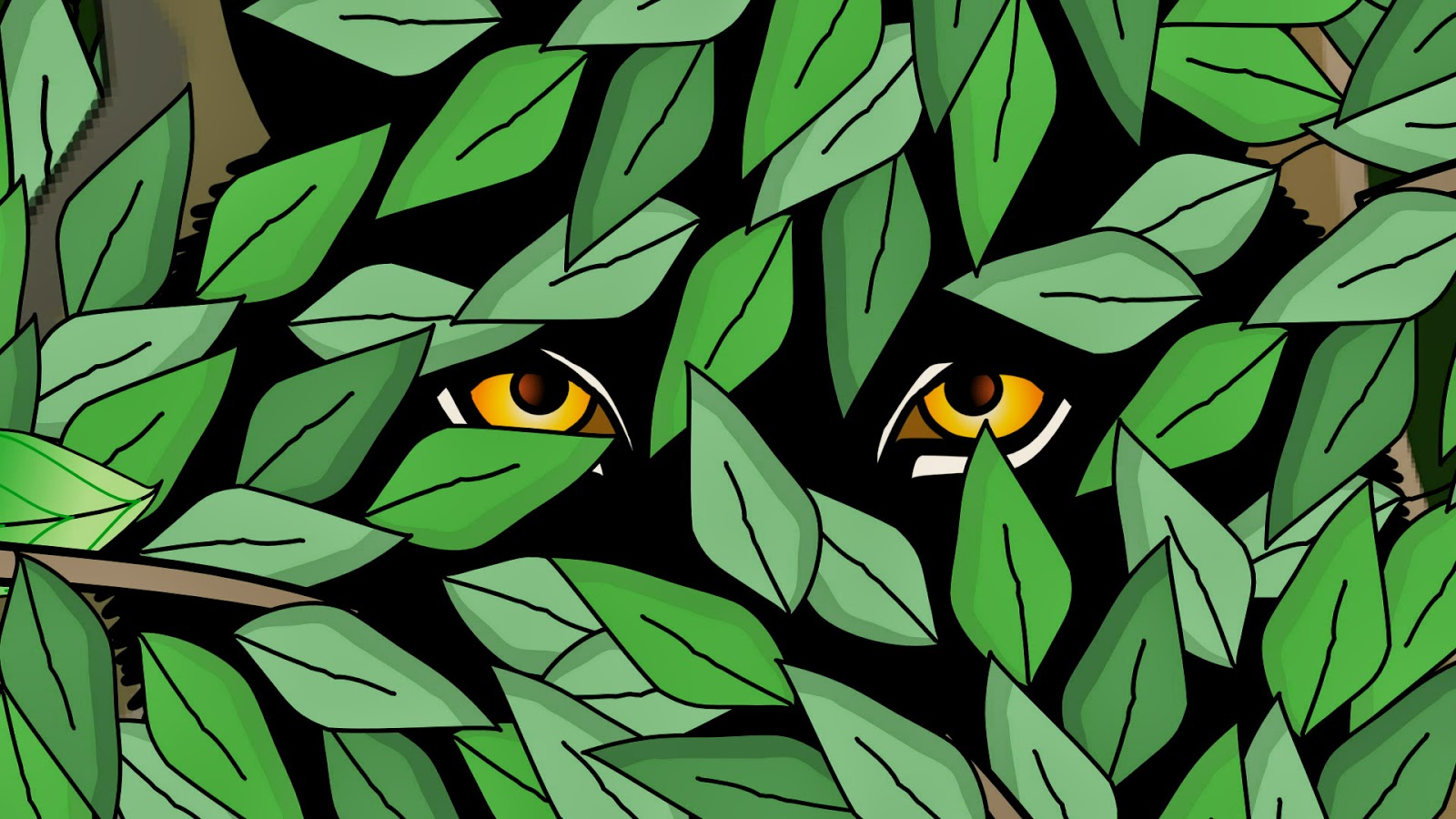 A pair of yellow eyes seemed to follow the two travelers as they pressed on through the bushes. At one point they became so large they were frightening. Someone or something was threatening them! Maybe this eerie ghost-like presence didn't like Tamil? Or maybe it didn’t want these two travelers to penetrate its private forest space? Maybe these eyes were trying to tell Anna Kumar that he should just go home and spend his time teaching something else? “Why go to all this trouble just for the sake of learning Tamil?” those eyes seems to say with their menacing stare. 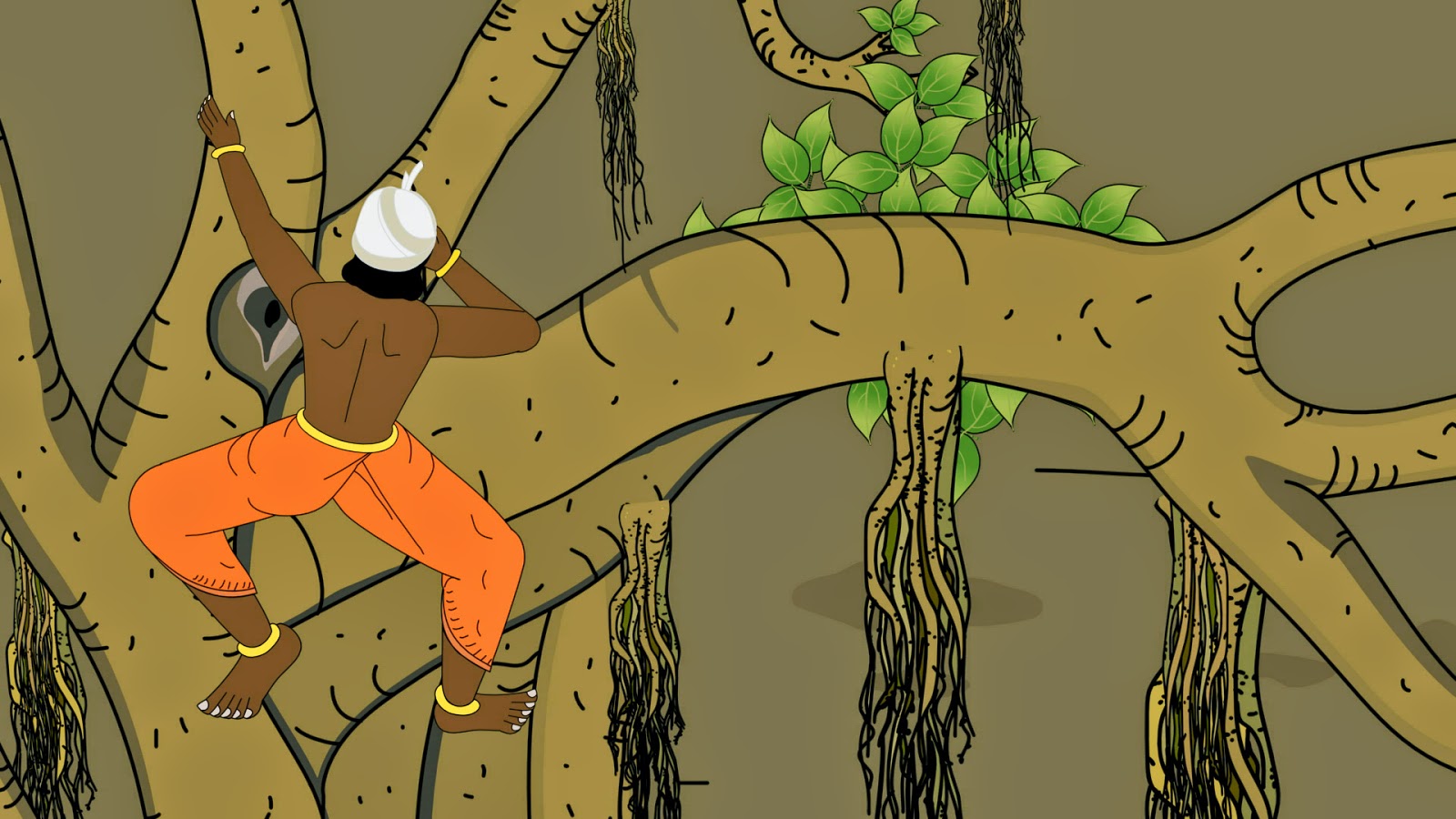 But the two travelers kept up their courage. At last they reached the great banyan tree where Tamil Selvi lived. They were elated. Through the thick canopy of leaves, and the many hanging banyan roots, they could just barely see Tamil Selvi sitting and relaxing on her favorite branch lookout. Anna Kumar then asked his assistant make his way up the tree’s thick trunk. When the climber was ready Anna Kumar handed him a bird net. 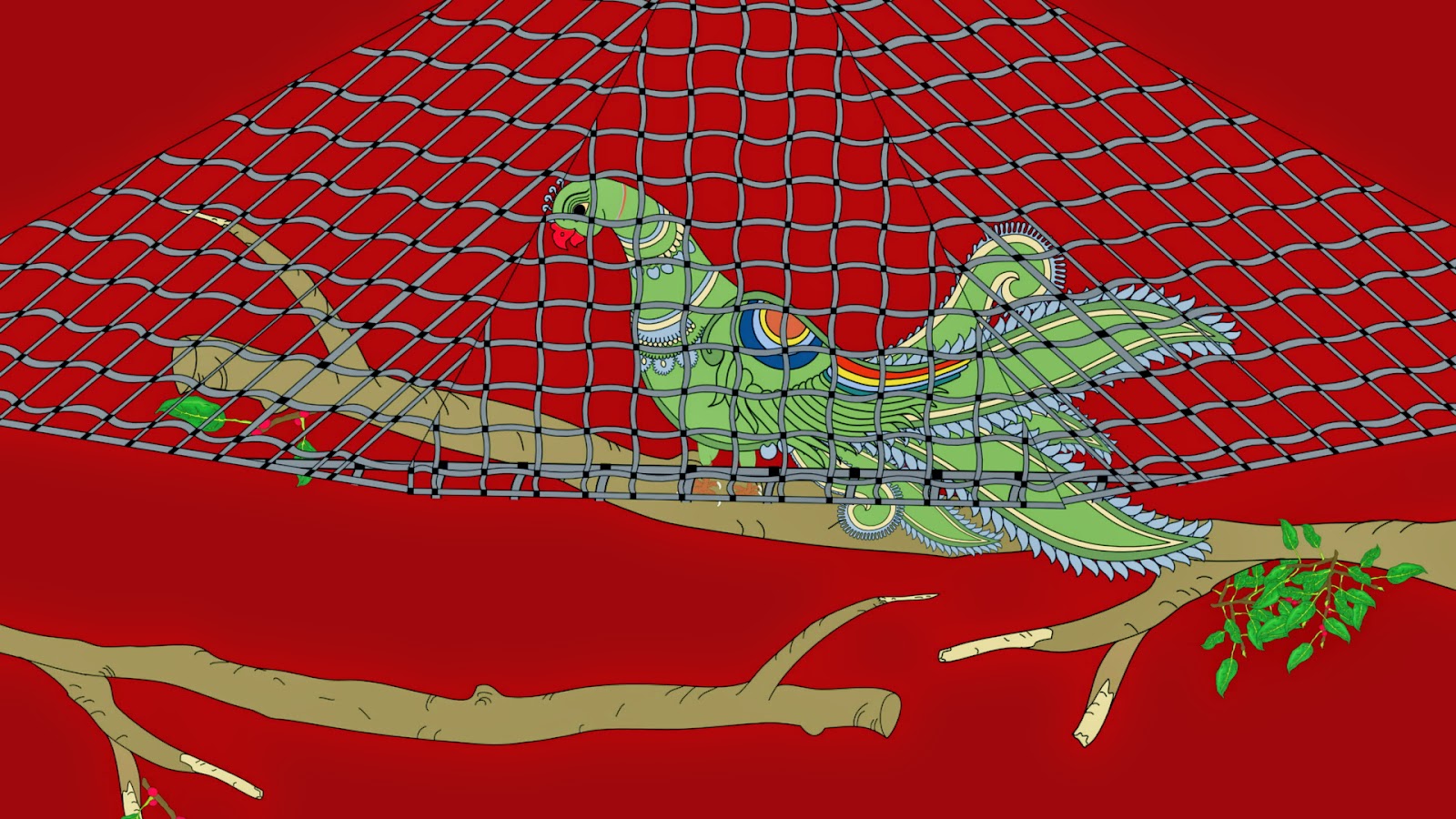 Anna Kumar’s assistant threw the bird net with perfect aim. It flew through the huge banyan tree at lightning speed. Lord Vishnu himself was watching these events. He helped the net maneuver with his own magical force. Soon its strong mesh landed gently on Tamil Selvi. She knew she was trapped. She was a little bit scared, but she stayed calm by remembering Lord Vishnu’s instructions. Maybe these were the people she had been sent to earth to help? 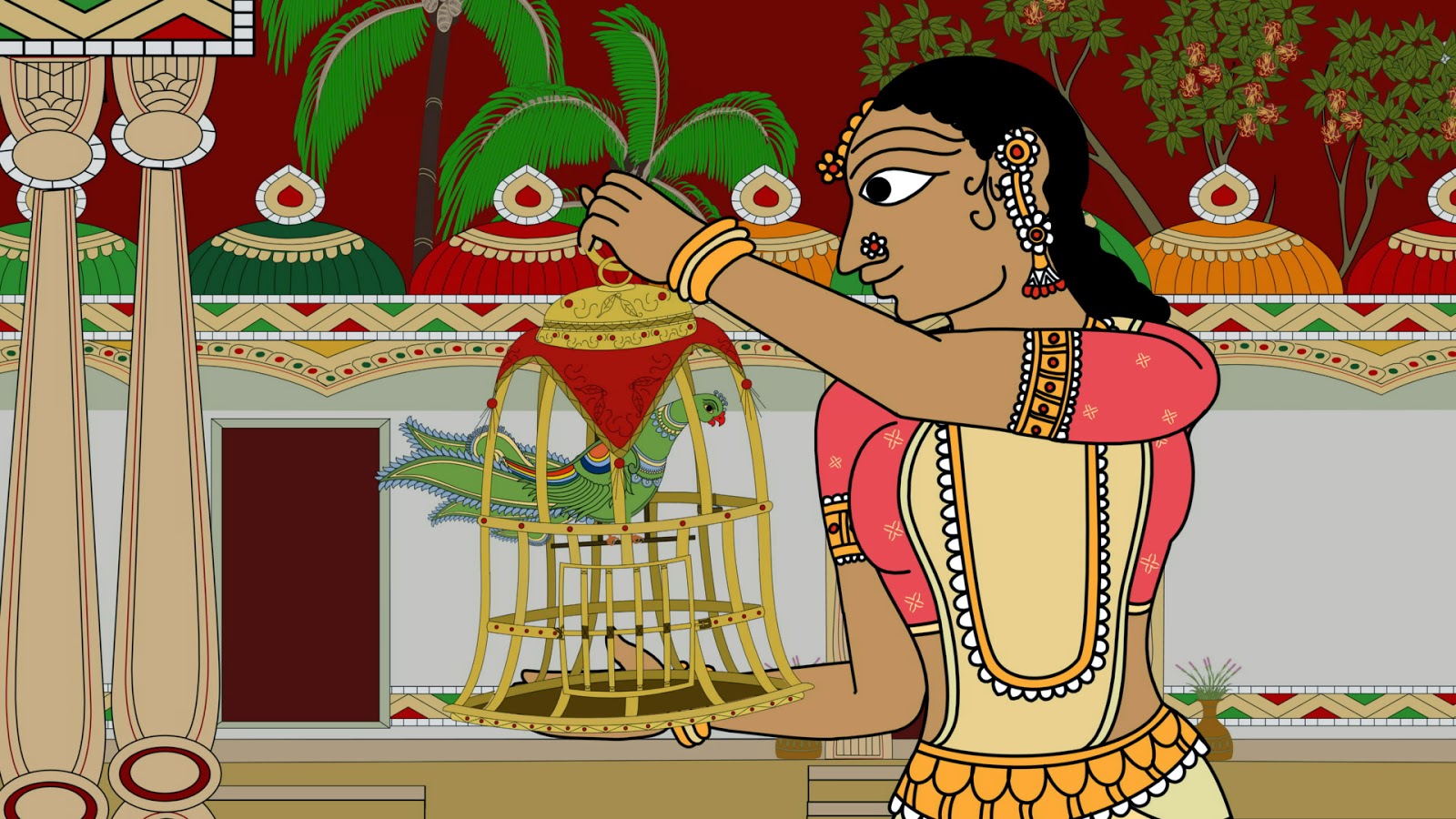 Soon the two travelers returned home to their village with the lovely bird safely protected by their cage. As soon as they had arrived and dismounted the two men handed Tamil Selvi to a young girl named Tangal. She was Anna Kumar Kumar’s best language student. She happened to live in the local palace located right there in their village. They would let Tangal learn to talk with this lovely visitor first. If this first encounter went well then the two men would decide what to do to share Tamil Selvi with the other language students nearby. For a few days Tamil Selvi stayed in her cage near the swing where Tangal loved to sit. Slowly Tangal and Tamil Selvi got to know each other. They became friends. 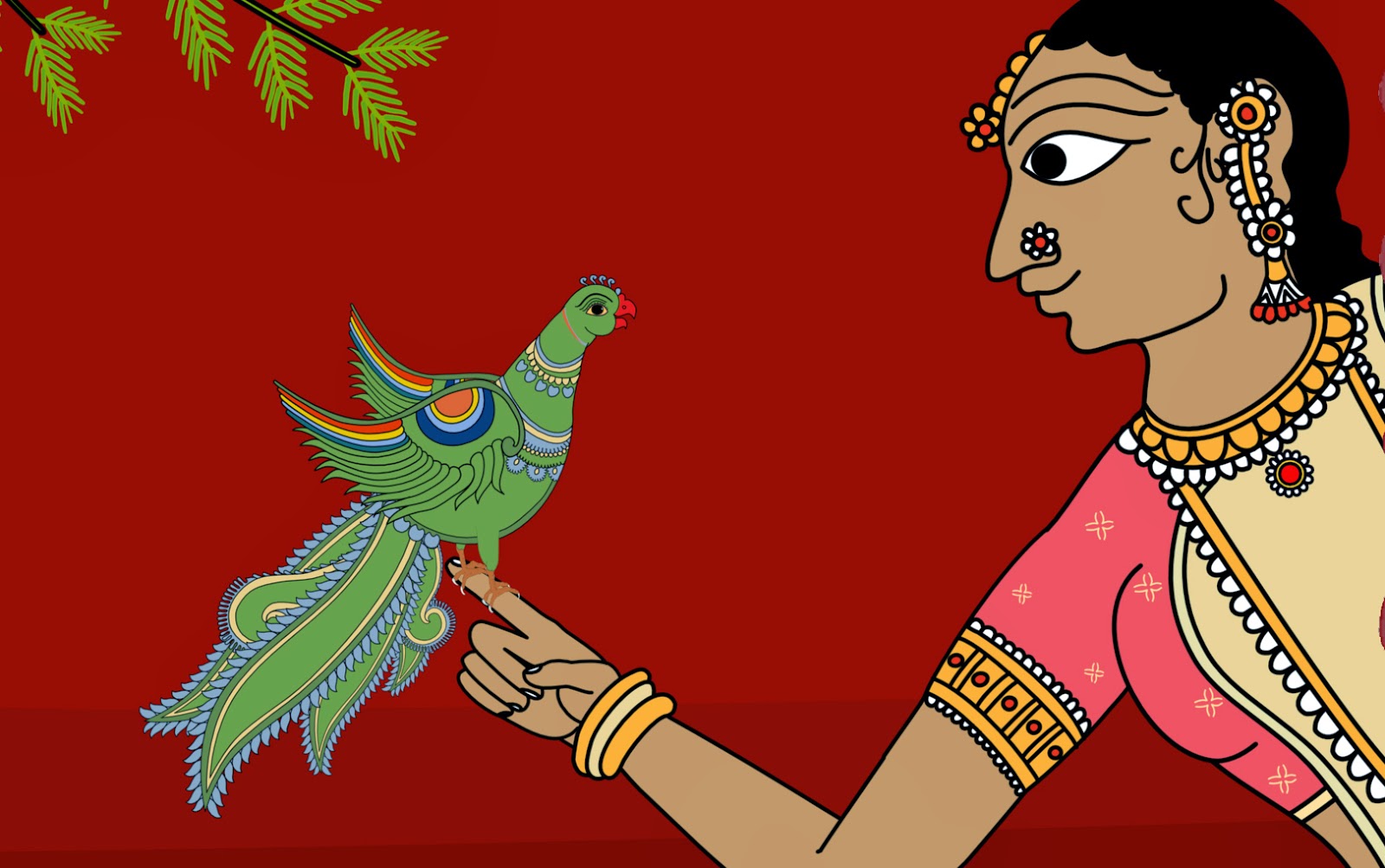 At first Tangal had to practice hard to hear what the lovely bird was trying to say to her. She tried to remember each of the bird’s new words. Then Tangal worked to string the bird’s words together. She also tried to imitate the simple songs Tamil Selvi began to sing. Tamil Selvi was pleased with the progress of her student. Soon the parrot suggested that she be let out of her cage so that she and her new friend could play games together. In one game Tangal held out her right forefinger and Tamil Selvi had fun trying to stay balanced on it. Tangal tried to make her dizzy by her finger to and fro. The two had fun teasing each other, trying to see who would get dizzy or lose their balance first! 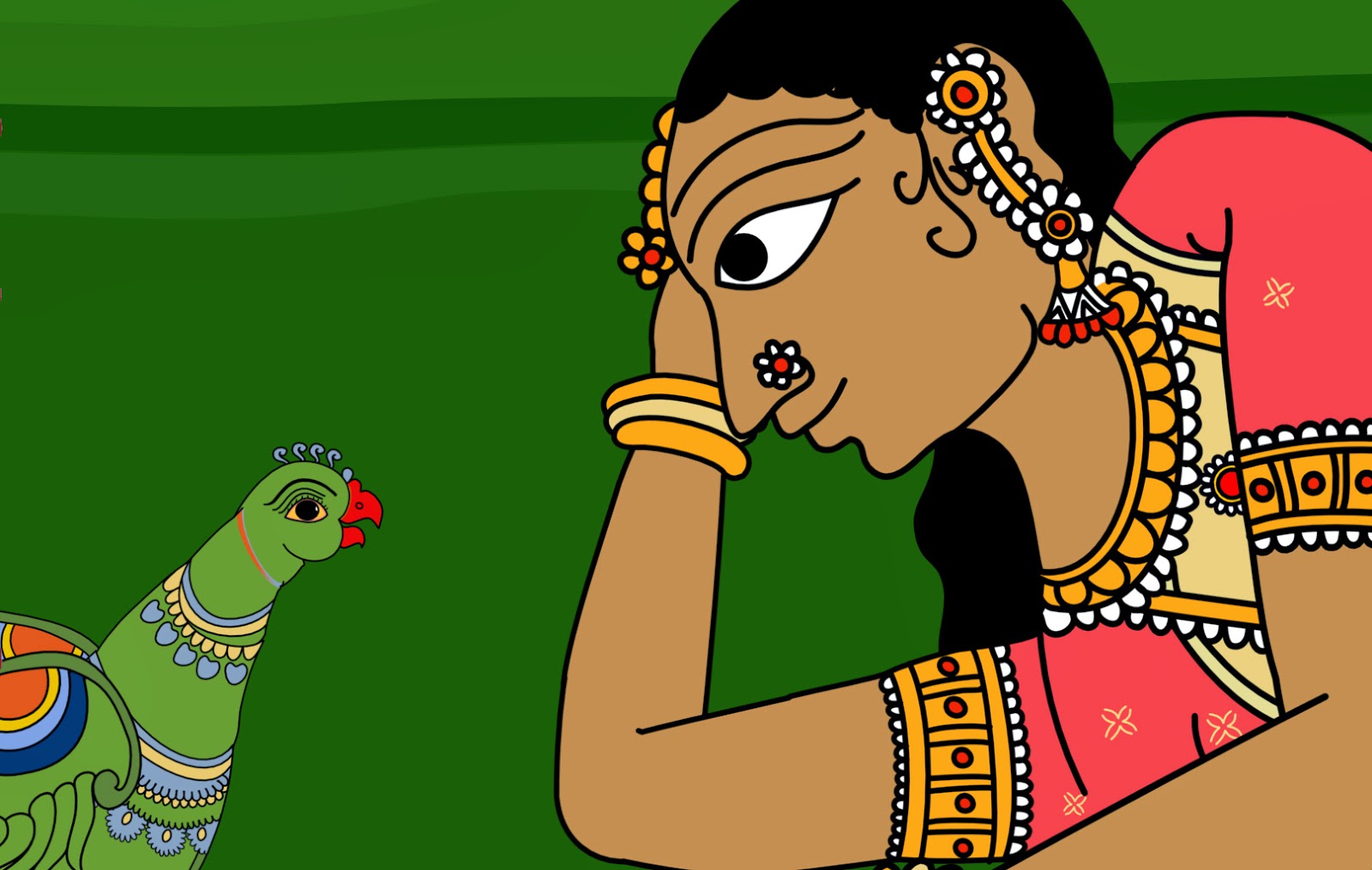 Then the lessons became more serious. Tamil Selvi now started teaching Tangal some poetry. Tangal listened well and carefully repeated each lovely, lyrical phases she heard. Her parrot companion was pleased with this progress. Soon she began to tell Tangal about the lovely world she had come from, Lord Shiva’s distant world of Kailasa up in the clouds. 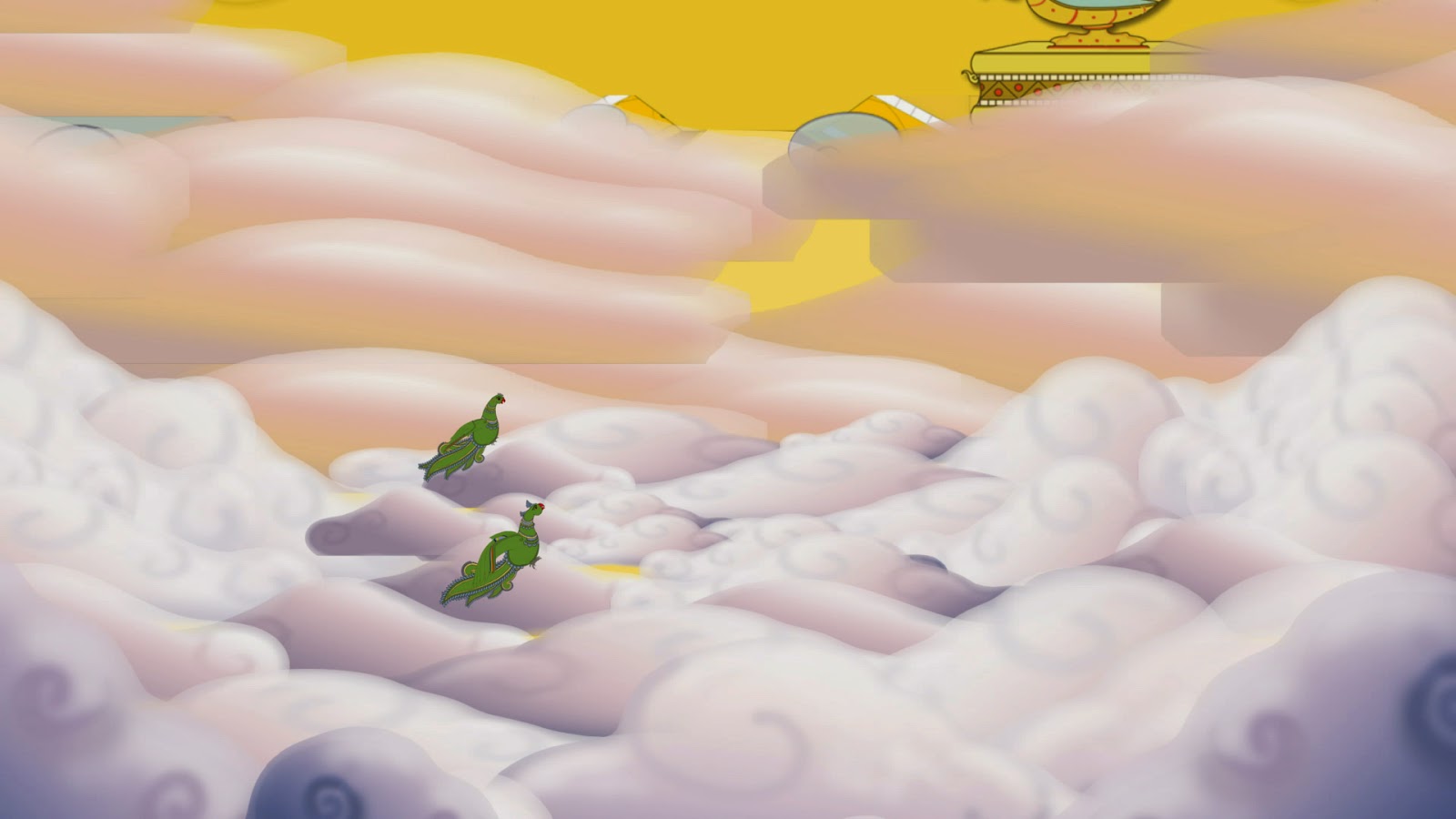 Tangal longed to see Kailasa with her own eyes. She started to beg Tamil Selvi to take her there. Lord Vishnu, always watching from above, overheard their conversation. So one day he turned Tangal into a parrot. Now the two girls could fly up, up and away together. With Tamil Selvi in the lead, the two dove through the clouds. Finally they reached Tamil Selvi’s old home in the sky. “What a wonderful reward,” Tangal thought to herself! After spending some time exploring this new world, Lord Vishnu then returned Tangal to earth and to her original human form. But now that Tangal had mastered Tamil she became confident that she could fly around with her parrot friend at any time! Learning Tamil had brought her so much! There was so much beauty this new language, and so much to discover! Speaking Tamil was not work anymore. Instead it became something to really enjoy! 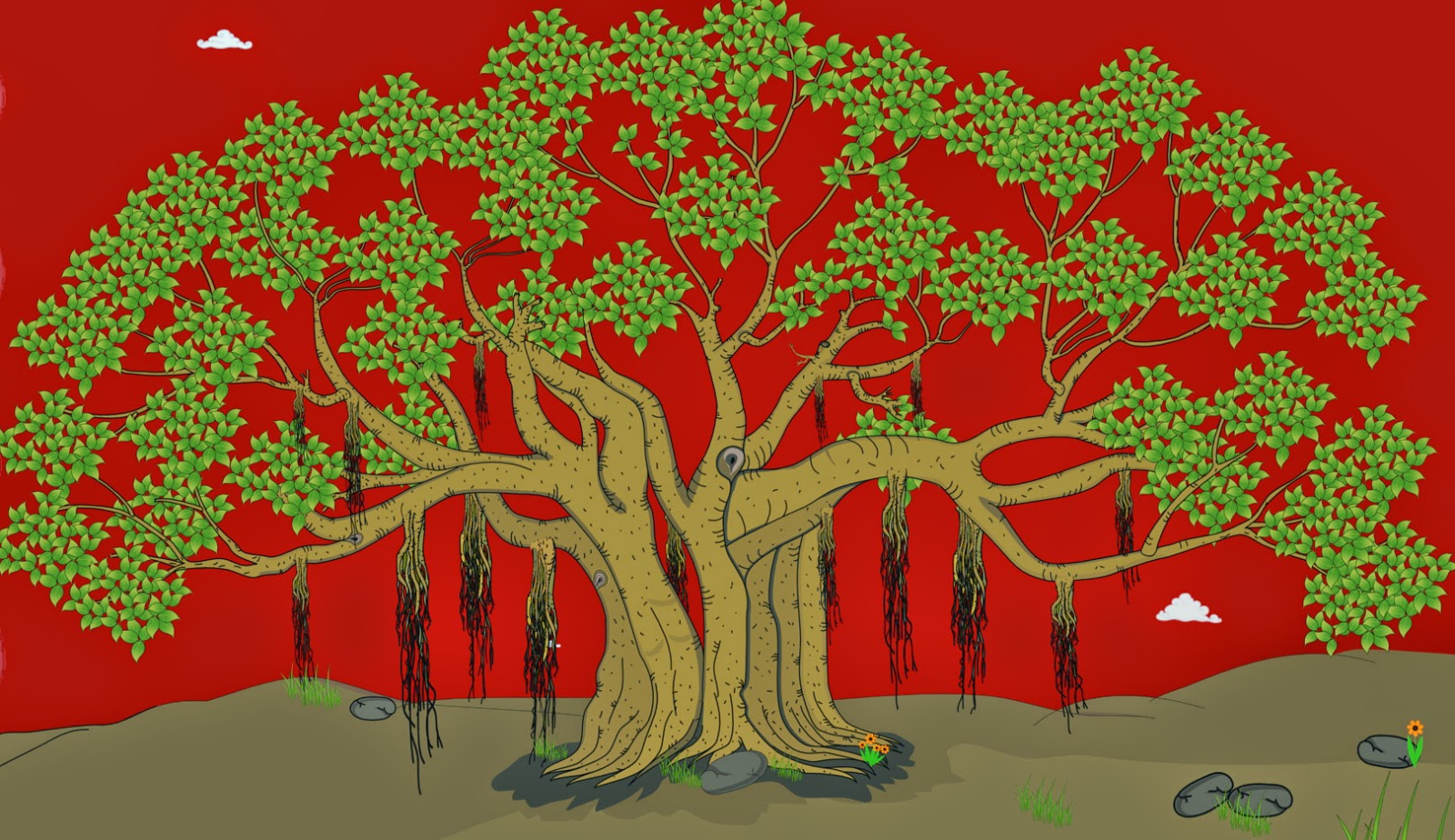 Now the teacher, Anna Kumar, began to think of what he could do for his other Tamil students. Feeling bolder now, he soon told each one of them the story of Tangal. Anna Kumar bade others to follow her lead. But now he asked each to set out in search of their own banyan tree. He told them that, with hard work, each of them would find their own Tamil Selvi. 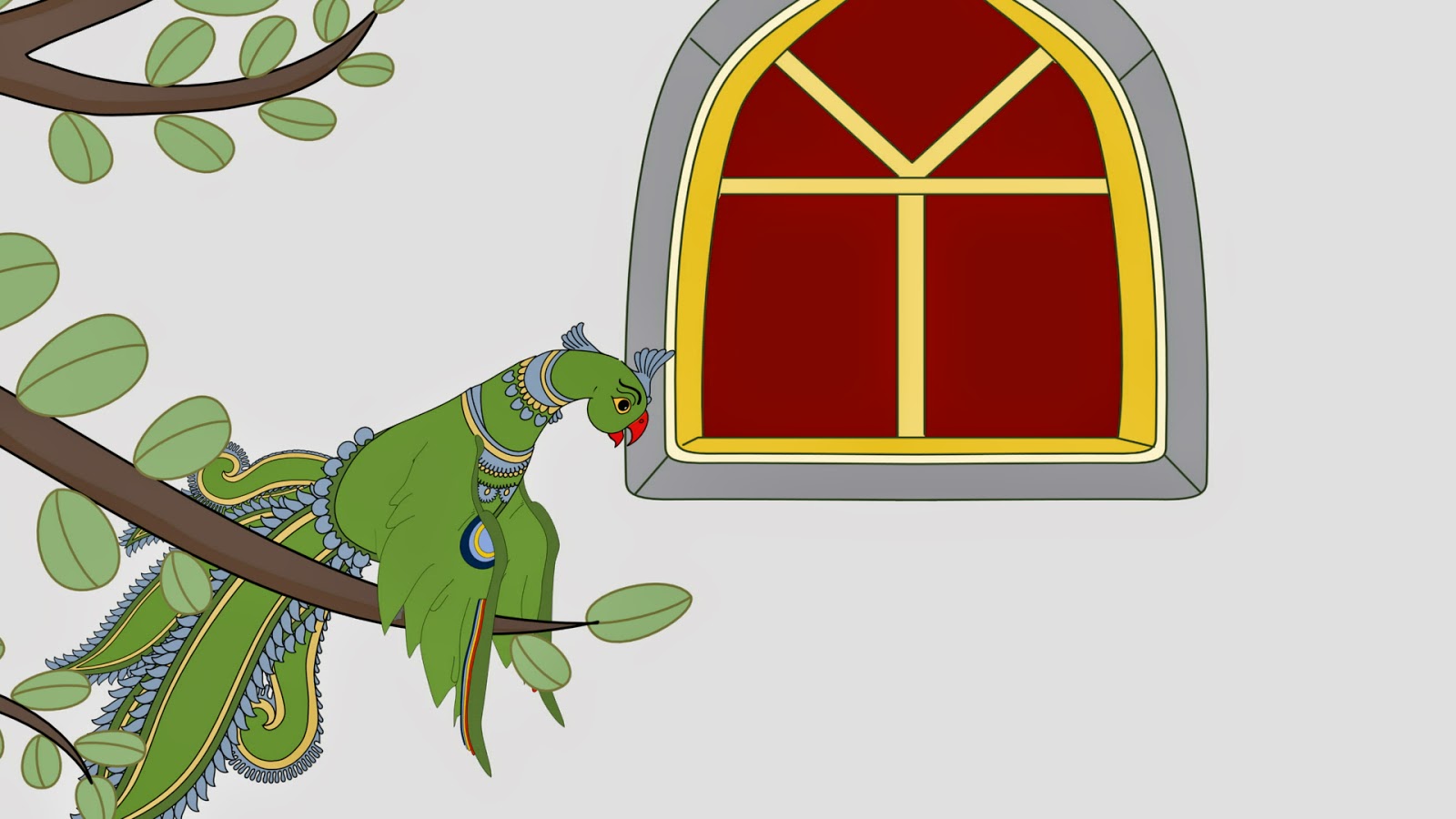 Anna Kumar also said to them that they might not even need a net and a horse to succeed in their search. Lord Vishnu would be there to help them find their treasured companion. He would help a lovely bird to find them! Perhaps if each student called out the name Tamil Selvi or Tamil Selvan a similar bird it would fly to their own home. He told them to expect it to sit on a branch and call to them through a window. 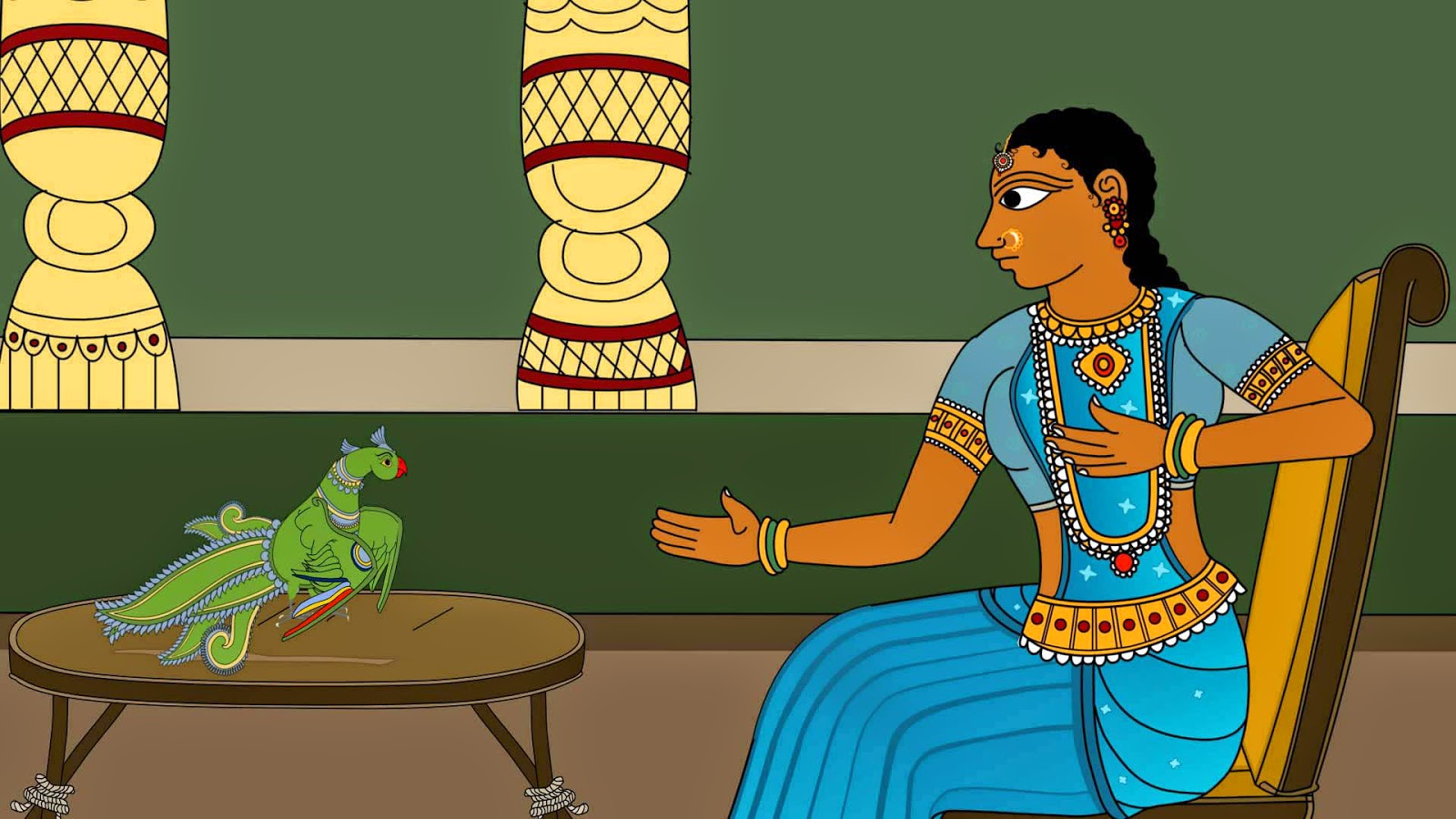 Anna Kumar told his students that if they heard Tamil Selvi, or Tamil Selvan, calling from a window that they should let this beautiful bird in and befriend it. They should practice their lessons well and be ready to recite a few poetic songs when the bird arrived. He assured each one that if they prepared mentally for a winged visitor, then that visitor would one day come. 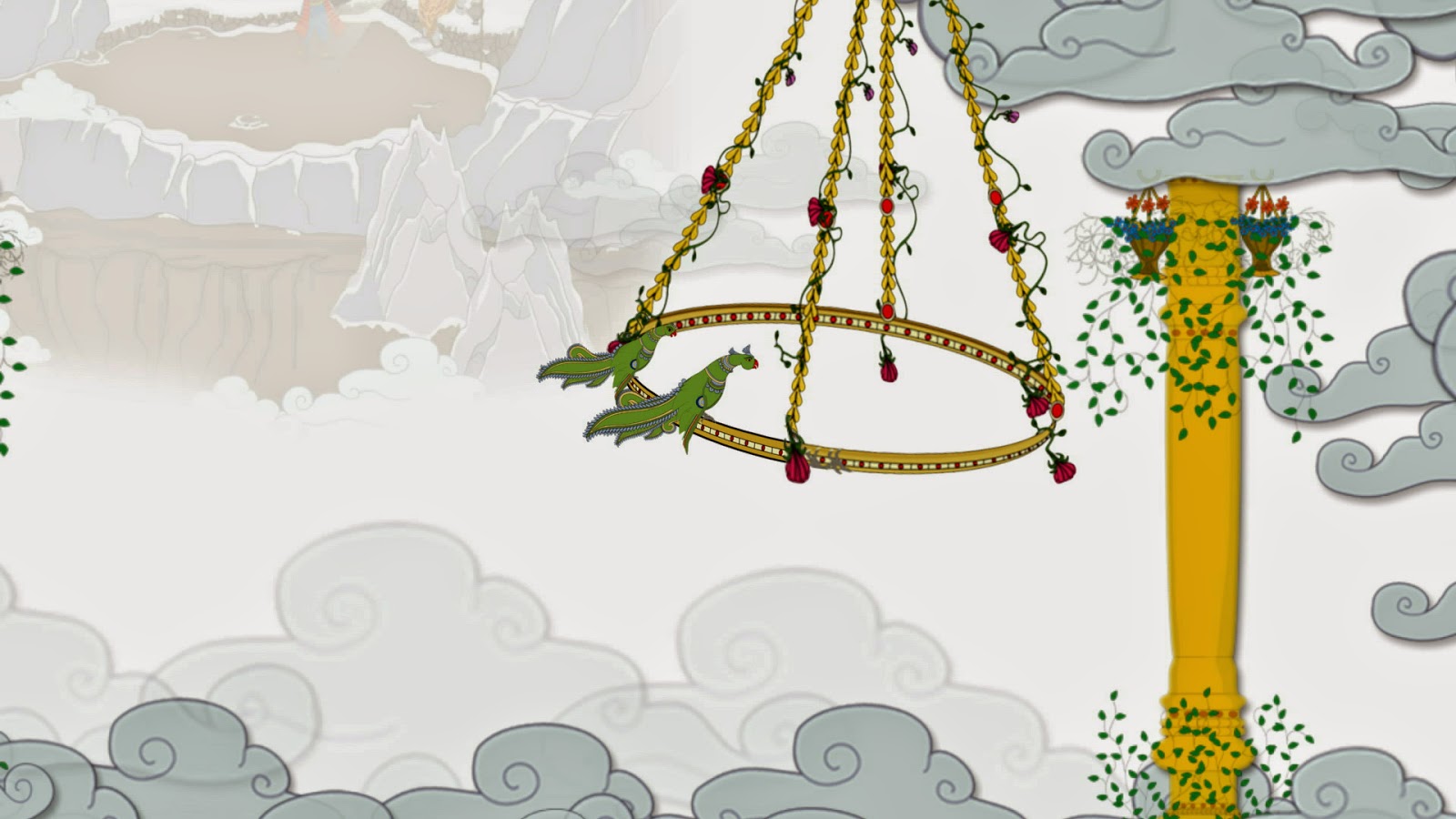 After all, India’s great banyan trees hold many lovely parrots. Each one is just waiting to befriend a human being and speak with them by singing out lovely Tamil phrases. Everyone can have a flight to Kailasa, learning to fly alongside the wings of such a friend. It only talks time, patience and some serious hard work. 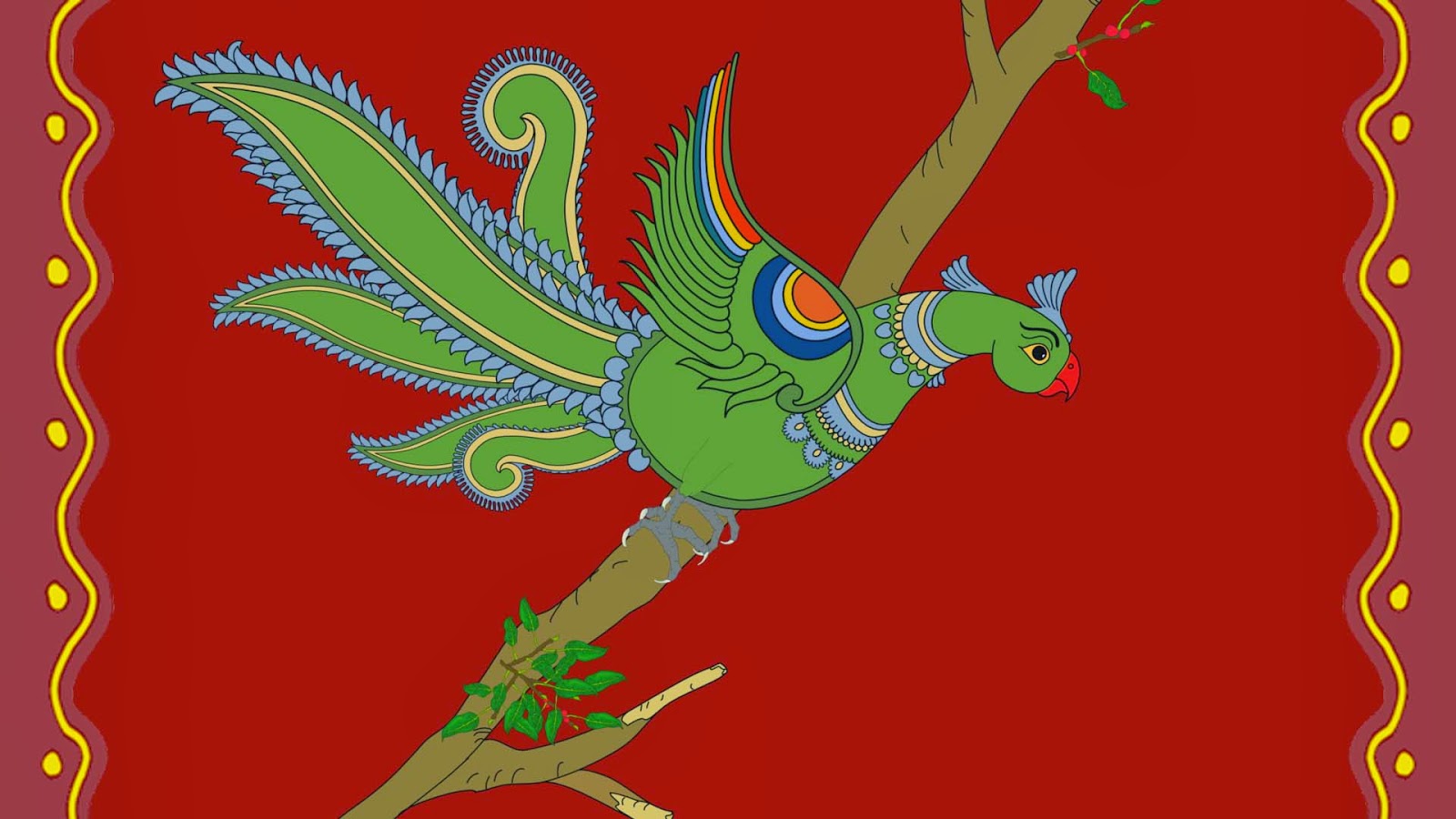 The language known as Tamil is as beautiful as a jeweled parrot. Just listen and practice the language and you, too, will eventually be able to hear its melodious phrases and lovely songs!
Posted by Ponnivala Publishing at 13:07