HOW DOES A TRADITIONAL WELL-AND-BULLOCK IRRIGATION SYSTEM WORK? 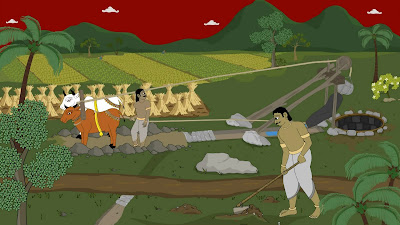 This Legend of Ponnivala video clip is presented primarily to show and discuss a very unique traditional irrigation system used (as far as I know) only in the Kongu area of Tamilnadu, India.

But first I want to say a few words about the perennial challenge of providing water to crops in this basically very dry, upland region of Tamilnadu. In early times the people living in the Kongu area were able to manage their crop regimes by depending only on very intermittent rains. They were successful in this for multiple reasons. For one, their agricultural activities were only part time and were liekly carried out with just a hoe and a planting stick. Few large areas had yet been cleared of trees and that newly exposed earth further broken up using a plough. Both activities, of course, cause the soil to dry out under India’s generally hot sun. Also, the crops were different in earlier times. Most people grew mainly millets plus (sometimes) a hardy type of maize. Both types of crops were highly drought-resistant. Hence, in the early days, the lands of the Kongu area retained much more moisture than they do today. Furthermore, plants cultivated by human residents needed only an occasional rain. As farmers grew more ambitious, however, they also needed more water. As a result, the Kongu area developed a very clever system of irrigation. It rested on a substantial underground water table that used to be very reliable. Now, by contrast, the area has became blanketed by electric motors and “tube wells.” These have now lowered the water table below what traditional stone-well diggers can reach. So this traditional irrigation system has now been almost totally abandoned, though the old well-pits are still visible in some fields.

Now consider the video clip itself. Note that to share this in an understandable way I have had to slow the animation down (and loop its minimal sounds). The result is not perfect but it will give readers the basic idea of how this system used to work. You may want to watch the clip several times. The basic idea, as far as I know, is very old and also quite ingenious. Note that a pair of bullocks is hitched so that they can walk down an inclined slope as they pull a heavy metal bucket full of water up and out of a deep well. Their master sits on the ropes they pull on the ride down only, adding to their tension. This helps the bullock team as well as encourages them to work. As the bullocks walk forward a large metal bucket rises from the depths. While still deep in the well tipped by a special added rope so as to allow it to fill properly while lying on its side on the water’s surface. Immediately after filling, a long leather tube attached to the bottom of the bucket is folded over (using a secondary rope) so as to prevent the newly-captured water from spilling out as the bucket rises.
When that large metal container reaches its high point (thanks to an arched set of rollers built high above the well) the bullock driver pulls on the end of that same tube-rope, now straightening it. As a result, the lifted water now starts to flow out from that metal container. It flows through the attached leather “pipe,” and then into a short, straight irrigation channel. There it is directed, by a set of channel-feeding gates to the specific nearby field that needs watering at that moment. Then the cycle repeats. But first (not shown) the farmer has to make his bullocks walk up that inclined ramp... backwards! This is not an easy challenge for the bullocks nor the driver (who must dismount and walk up the ramp himself). But the bullocks understand and the man-animal team are skillful in doing this together.

This very clever system was the means by which these upland Kongu farmers kept their crops moist between rains in areas that were not close enough to the Kaveri river for farmers to utilize its once-abundant waters directly. I see this mechanism as having been a “transitional” solution, one used by farmers who wanted to move to plough-based tillage but were not rich enough to build large storage tanks and fancy sluice-gated systems. This water-lift device is used by the farmers of Ponnivala in the first generation of this story, but not later. It was their solution to irrigation before they had accumulated enough wealth to build a large irrigation tank... something featured later in the legend.

The later part of this same video clip makes it clear that the area in question was experiencing severe droughts around the same time that newly arrived farmer-settlers were beginning to try out their new plough-based system of tillage. Whether the drought mentioned in the story was due to their revolutionary ways, and to the cutting of trees that accompanied this new approach to agriculture, is not made clear. It could also have been a natural event, part of a drought cycle that had most certainly hit the area before. Whatever the cause, this extreme dry spell is central to the story. My next blog will discuss what happened as a result of that terrible lack of rain.