WHO IS THE MAN IN RED?

WHY IS HE ACTING AS A SPOKESPERSON FOR OTHERS? 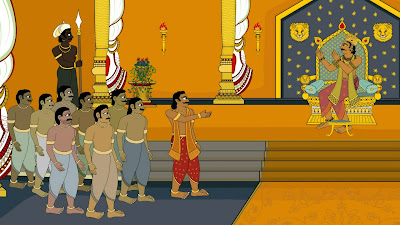 Here is another very simple Legend of Ponnivala video clip. Again I have inserted it into my blog for teachers to use. The scene does not need much comment. As the story unfolds, the Chola king’s attendant goes to find Kolatta. He then brings him into the king’s reception hall where his eight brothers are waiting. The Chola asks Kolatta to confirm that these men who are there to see him are indeed his own birth-brothers. It is significant, perhaps, that Kolatta is the key person here, and the one most trusted by the king. After all he has already proven himself to be a good worker. So it is Kolatta who is asked to confirm the identity of these visitors. Once that is done the king immediately offers them all work. Furthermore, the rate of pay he names is exactly the same as that their elder sibling has been earning; twenty measure of grain a month. It is taken for granted, it would seem, that the nine brothers are all equivalent where setting a labour rate is the issue.

This particular scene also throws a some extra light on the question asked in my blog post #1.8. That was: Is it fair to pay just 25% more when additional labour by a wife is added to the mix? In that scene it would seem that the presence of Kolatta’s wife was the reason the king agreed to raise Kolatta’s monthly payment from sixteen measures of grain to twenty. But this time, when speaking to his band of brothers, the king does not ask about wives. Nor do the brothers mention this matter. This time it is quite clear that the Chola is hiring (and agreeing to pay) for labour solely on a per-person basis. He is not suggesting (nor is he being asked) to make an adjustment to the wage being offered based on the presence of a wife. Was Kolatta simply a “good bargain-maker” or is a women’s work input on behalf of her husband really recognized, in this story, as a legitimate reason to pay more? And where are the other eight wives that we know were around somewhere (from blog post 1.4). Did they not come to visit the king along with their husbands? The animated video clip shows the men alone on their way to see the king (blog.1.7) suggesting that their women stayed behind. But we never learn why this is the case. Also note that a subtle differentiation has been made between Kolatta and all his younger brothers. The eldest brother is assigned (assumed to be) the leader vis-a-vis his entire group of siblings. Respect-wise the eldest stands out, yet wage-wise the nine men are treated identically. The same tradition of respect-for-age is still prevalent in the region today.