WHAT DO THESE GODS NOT NOTICE AS THEY LOOK DOWN? 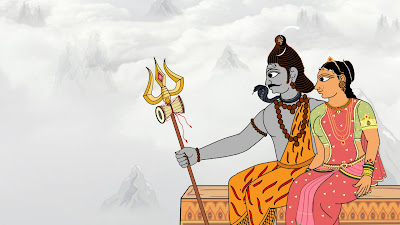 The first two instalments of this blog about the Legend of Ponnivala story were long and somewhat scholarly essays. They were intended to provide a foundation for what lies ahead. They may not interest many readers. From now on I will focus on particular scenes in this story and also try to be briefer and more colloquial in my style. I hope many readers will find my comments interesting

This opening scene of The Legend of Ponnivala story is important for what is NOT seen by the great gods Siva and Parvati as they look down at the earth. Siva starts the conversation by saying “Look at that beautiful forest down there.” Then Parvati responds to his comment. Her words lay out a key concept that will set the entire story in motion. I must quote her in full:

“Yes, but I do not see any ploughed fields. There are no crops being grown. I want to see this beautiful area become bountiful. I want to see the land cleared and filled with lush crops. I want to create nine farmer brothers who know how to use a plough. Let them till the sweet earth so that in every season the fields will be green and lush and the storerooms and warehouses of the area can be refilled with fine produce.”

It is this key Hindu goddess Parvati whose vision initiates a shift in land usage in this area, a transformation I have already mentioned as very important to this story (in my earlier Blog post #2). Parvati speaks from the perspective of a powerful ruler, someone interested in stimulating the production of crops that can fill numerous warehouses and storerooms. The landscape this goddess wants to see is commercial, at least in the sense that it should be able to feed many. Its bounty should be so great (so lush) that the resulting harvest can easily be shared (having an excess that can be skimmed off). That excess will (though not explicitly expressed as such by the goddess) then be ready for tribute payments, tax-style transfers deliverable to powerful overlords. They, in turn, will be able to use this new income to support temple construction, armies, road building and much more. In sum, the amenities available as the result of creating an advanced, plough-and-irrigate economy will, in its’ turn, create an opportunity for an increase in social power and also an expansion of hierarchical relationships. It is not surprising that a divinity whose name stands to benefit from increased temple building activity, would express support for this kind of ecological shift. She is speaking about a landscape-wide change. We will see, in a future post, how she also (subsequently) advises her newly-created farmer-devotees to undertake regular temple-focused activities.

But I have not yet clarified what the goddess Parvati DID NOT SEE when she initially looked down at the earth. Although we do not know exactly which forest Siva and Parvati were gazing at, the area they see from above is obviously local to the story, somewhere along the great Kaveri river. What we do learn, a little later, is that this area is not without proud human residents already. Very near where the goddess wants to create plough-wielding farmers we learn that there are already resident artisans. Furthermore, these men clearly have a number of skills, although using ploughs in a landscape-wide way is likely not one of them. These men know about fine metalworking, stone carving and carpentry, at the very minimum. They are certainly not primitive beings. Parvati is about to do something that will quite naturally instigate rivalries and disputes between any f newly arrived farmers and these better established ancient local residents. Therefofre,in a very real sense Parvati can be seen as the instigator who is responsible for the extended human strife that will soon ensue. Why couldn’t Siva, Parvati’s husband, be the one to come up with the idea of creating human farmers who do their work with ploughs? Likely because it is traditionally the Hindu goddesses, not their brothers or husbands, who express the deepest interest in human families and also in ecological matters. Furthermore, the goddesses are usually the ones to “stir up” village trouble, especially problems like disease, drought and famine. This happens, in particular, when they are not worshipped regularly. Siva, by contrast, is more interested in grand, cosmic-scale matters. As already stated earlier, then, the Ponnivala story does not run counter to much that already been written about Hindu beliefs. However, but it does throw fresh light on many specific traditions and cultural issues that lie underneath the broad umbrella of that larger socio-religious system.