WHERE IN THE WORLD IS THIS? 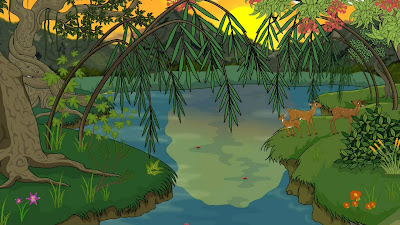 I am about to start a new blog featuring themes and insights I have culled from working with The Legend of Ponnivala Video series. This set of short essays will cover everything about the story I find interesting, starting with its ecology and extending to issues of social justice, shifting technologies, economic rivalries, local politics, power relationships, recorded history, geography and even touching on the roles of various gods and goddesses whose concerns intertwine with this story. I will start by giving blog readers access, one blog post at a time, to a sequence of thirty short video clips. Each will be one minute or less in duration and all have been drawn directly from (just) Episode One of the Legend of Ponnivala animated series. If (and only if) MY BLOG FOLLOWERS express enough interest, I promise to extend this commentary further by referencing additional excepts. I can easily draw on hundreds of these which lie scattered through the story’s remaining twenty five episodes. PLEASE VOLUNTEER YOUR THOUGHTS! The more discussion generated the more likely that I will carry this initiative forward and decide to discuss the later episodes of this great legend, as well!

My plan is to initiate each clip discussion with a simple question. The first question is a rather obvious one: Where does the story take place? Ponnivala’s epic tale comes from an interior area of the state of Tamilnadu, India. The action takes place near the banks of the Kaveri River, an upland area known as the Kongu region which the story’s singers like to call “Ponnivala-nadu.” Ponni is a poetic Tamil term used to describe this great watercourse by referencing one of the words for “gold.” In deference to these local poets I long ago decided to name my animated version of this story “The Legend of Ponnivala.” That name represents my personal effort to capture the many images present in the bards’ songs, refrains they have embedded in this tale’s traditional musical telling. The term Ponnivala is mainly embedded in story poems that use “The Land of The Golden River” as their core theme.

This is a story from medieval times. All the events described occur before the arrival of British Raj. Do not be surprised, therefore, that no foreigners are described in this story, even through it is “epic” in its basic breadth. Furthermore, although this legend features just three generations of one powerful local family the heroic adventures described appear to span about six centuries of actual history. Judging from scattered clues, little details embedded here-and-there within the tale, this story describes the period roughly lying between 1,000 and 1,600 AD.

From the scene shown in the first “still” (which is drawn from a repeated opening sequence seen before each episode starts) the tale’s location appears to be rather “idyllic.” But remember, this legend takes place in an upland area, at a time when this region had not yet been colonized by plough-using farmers. Wild animals were plentiful and pollution was not an issue. The mountains in the background are still there. The Kongu region is ringed on all sides by high hills and is basically a large and fertile “hanging” plain fed by a great river that flows southward out of the mountains of Southern Karnataka. Furthermore, the river Kaveri is still beautiful (in spots), even today. And this river still serves as a source of life for all who live along its moist and fertile banks. As The Legend of Ponnivala unfolds you will discover that (at its core) it is a tale about how this picture of an Indian “Eden” slowly changes. We will soon see large-scale irrigation-tank farming methods taking over and beginning to dominate the area’s earlier, more pastoral life style. Though this transformation happens slowly, it is relentless. Furthermore, that change clearly accompanies a gradual, but steady shift in the political and economic significance of this (once remote) “Kongu” area.

Have you experienced The Legend of Ponnivala on TV or in print? Let us know your thoughts in the comments below!

To find out more about The Legend of Ponnivala -- the legend, the series, the books, and the fascinating history behind the project, visit www.ponnivala.com.
Posted by Ponnivala Publishing at 13:39