WHO IS SINGING THIS STORY? 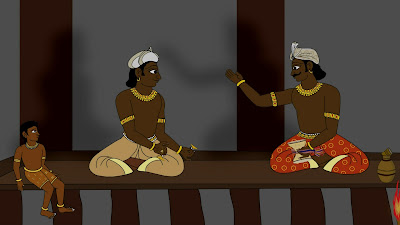 This second instalment of my new blog also features a pretty straight forward question. Who sings the Ponnivala story? But the topic is important for those who do not know the origins of this legend already. This is a traditional oral epic with no written version that is anything like as extensive as is the full epic I tape recorded over 44 hours during a live set of village performances in 1965. There were two bards involved, one a senior singer of sixty plus years and the other an experienced assistant, about forty five years of age, who also knew the story well. The performance lasted for roughly two and a half hours a night for a full eighteen nights!

The important thing to remember is that this story is based on a strong oral tradition that persists in the area to this day. This epic is something like what Homer might have sung, a tale driven by images of past heroes and heroines whose exploits and skill sets are bigger than life. The epic is also imbued with references to gods and goddesses, as well as being decorated with “magical” details. Nonetheless, The Legend of Ponnivala is not a fairytale. This story is a kind of cultural declaration by the Tamil-speaking people of the Kongu region of their unique cultural (and historical) identity. It provides a foundation stone that underlies current practices at many local temples dedicated to its heroes. Their well-known names are everywhere: celebrated on tea stall banners and proudly borrowed for use as lorry-truck logos. This epic’s heroes and heroines are also given new life each year in annual local festivals of many kinds.

Because this is an oral tradition it is culturally “fresh.” Though not at odds with India’s broad and deep literary heritage, the Legend of Ponnivala does look at these wider traditions from a different angle. It is a view from the margins, from the hills, from an upland area that provides a significantly new perspective on many, many matters. I have continued to write about and to promote this story for some fifty years.... because I believe its’ uniqueness matters. Many South Indians, both living in India and living abroad, are far too quick to brush off oral tradition as something secondary. Publishers tend to respond in the same way. If a story has written roots then it must be honoured and remembered. If not it must be inferior, minor and insignificant when one is trying to understand or to teach an “overview.” Some people argue that it is not relevant to one’s grasp of the “big” picture. I beg to differ. This story, I feel, can be likened to a Dead Sea Scroll. It is a view from the margins that truly heightens our core understanding of the broader cultural tradition it was designed to comment on. As such, I contend that The Legend of Ponnivala deserves much more attention that it has received to date.

There is one more issue I would like to speak about up front before proceeding with this Ponnivala blog post series. Many, many people believe that The Legend of Ponnivala is a caste-based story, and that it is designed to heighten the glory of one group at the expense of several others. I agree that there are many people in Tamilnadu today who express personal pride because of their presumed “family” connection to this story. There are also those who oppose its telling because they feel the same tale puts their own family ancestors down, insulting them in some way or other. I believe the people on both sides of this controversy need to re-examine the tale they think they ”know” so well by looking deeply at the oral version I recount here. In my view this legend is not, at its’ core, about caste at all. Rather, it describes very broad differences in life styles and in various means of production. Two of those life styles, that of the artisan-trader, and that of the hunter, are both very, very ancient. The other life style is that of the ploughing and tank-irrigating farmer who needs to maintain large, treeless spaces in order to plant and harvest effectively.

That new plough-and-irrigate way-of-life was imposed on the Kongu area gradually, by powerful kingdoms lying outside its geographic area. That social and economic transformation took place gradually but relentlessly in the Kongu area between the tenth and the twelfth centuries AD has continued to expand, in spurts, ever since. The Legend of Ponnivala, in my view, is about that economic transformation and the local social upheaval it caused. The artisans have many skills: stonework, metal and iron work, building construction knowledge, and in addition, they are carpenters and potters. Nowhere are any of this occupational skills referred to as groupings having separate marriage circles or separate eating rules. The hunters, a third important group, are even less differentiated. Indeed, they are all alike and are distinguished simply by the fact that they live in the deep forest. They are fierce fighters one and all!

This same lack of caste, as a theme, is also clearly seen at temple festivals for the story heroes in the Kongu area today. Wherever I have observed crowds listening to a bard-singer of the story there is no predominance of farmer-landowners in the audience, or indeed of any other social group. And if I was forced to generalize I would argue that this story is significantly more popular, at present, among non-landowning laborers. Those who make an annual pilgrimage to the key temple to the heroes, located in the hamlet of Virappur, are notably people from the service communities of the area: non-Brahman priests, barbers, potters, merchants, weavers and landless labourers. The powerful and the wealthy families of the Kongu region have, in general, turned away from this story heritage towards much more “pan-Indian” kinds of festival celebration. It is (a selection of) people drawn from the largely powerless social masses who predictably “remember,” and continue to celebrate, this area’s ancient oral story heritage.

Have you experienced The Legend of Ponnivala on TV or in print? Let us know your thoughts in the comments below!

To find out more about The Legend of Ponnivala -- the legend, the series, the books, and the fascinating history behind the project, visit www.ponnivala.com.

Posted by Ponnivala Publishing at 10:22