WHAT IS THE GODDESS CREATING? 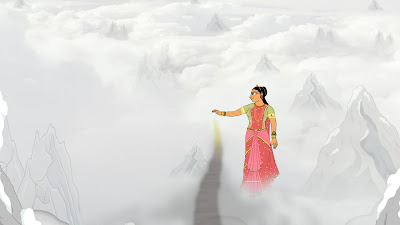 This Legend of Ponnivala video clip shows the goddess Parvati in the act of creation. The question as stated is easily answered. She creates nine adult men and tells them they have been “placed” in an uncultivated area. Then she tells the nine: “I want you to establish strong farmer families that will expand and flourish.” In her command Parvati makes no mention of human activities, other than the farming these men are expected to do. There is no reference to the possibility that there might already be other humans who pre-date these farmers’ arrival. The general mandate Parvati gives the nine men is very clear. They are to start families that will become strong. By implication these nine are to flourish, produce offspring and come to dominate the area where they stand, despite all hardships they may face. Those are the marching orders given to these men by their creatrix. In return the men bow respectfully and accept their instructions. Of course, they have no choice. This is why they were created and why they are who they are.

The creation event, initiated by the great goddess, makes a nice “origin myth” for the farmers. Some story devotees like to use it in this way. They insist that their ancestors were born by the hand of the goddess herself and that their occupation was been given legitimacy by her. In sum, they argue that their plough-based farming practices were once divinely mandated and that their inspiration flows from Her. That is not surprising. What is interesting that the artisans, who we will learn more about presently, are not given a parallel creation myth in the Ponnivala story. It would seem that they have simply existed on the land forever. The same is true of the forest hunters who first appear much later in this epic tale. Both these pre-existent occupational groupings are somehow “natural” components of the area’s make-up. It is very apparent from the start of the story, therefore, that these “original” nine farmers created by the goddess will become the heroes of this epic. The story will be told from their perspective.

How the goddess creates these nine farmers is also of interest. She uses a natural whirlwind, a kind of cyclone. Its vortex comes to rest at the base of an old Ganesh temple. Ganesh is the god (a son of Parvati and Siva) who is responsible for all “beginnings.” It is very appropriate, therefore, that the lives of these nine farmers take form at his feet and (undoubtedly) receive his blessing. But it is also reasonable to ask who built this Ganesh temple? Where did it come from? If there are no other people living in this area who care for it, then why is there? Look carefully and you will see that this statue has a fresh garland placed on it. Furthermore, look at the last forest scene in this clip. It shows up at the end of this excerpt, just after the goddess speaks. Look at the background. Through the trees you will see that there is a small settlement. Again we are given a visual clue (rather than a verbal one) that there are other humans already living on this land. From later events we can presume that this little settlement in the forest belongs to a group of artisans. And finally, note the presence of a river just behind the temple. This is undoubtedly a tributary stream that flows into the great river Kaveri. It is fitting that a group of artisan-traders would live near a river, a natural path along which a trade route likely lies. This is how these families would find customers for their “manufactured goods,” things like knives, spears, stone carvings, jewelled necklaces and cart wheels. It is also appropriate that the farmers so central to this story are “born” right there, on this riverbank. This water course is something that they will likely later need to harness. They will be able to use this stream, and others like it, to properly and reliably irrigate their well-ploughed fields filled with new types of crops like sugarcane and rice, that will likely be water-hungry.