WHAT IS THE KING’S RESPONSE TO A WARNING? 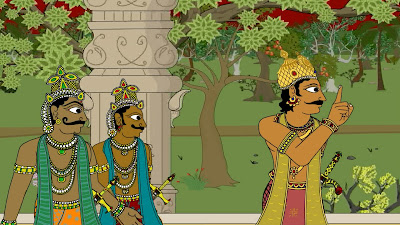 This is a key clip because the Chola king’s associates clearly warn him, in advance, that his plan to give the lands of a place called Ponnivala to nine loyal farmer brothers may bring trouble. But, as we will later see, the king proceeds to execute his plan anyway. The king’s associates tell him that the area is already occupied by a group of artisans and that they may object to losing control of the lands they are currently using for their own sustenance and livelihood. Of course these “friends” of the king are right. Why would they welcome newcomers whose clear objective is to take over their own territory (which was likely communally managed)? The Chola king has an interesting response. He orders an assistant to call all the resident artisans to a meeting at his palace. But he also orders all the 56 powerful families in the area to attend. It is not quite clear who these powerful families are or where they really come from. But they are likely all (or at least mostly) farming households located in places closer to his palace, since we have been led to believe (assume) that there was no plough-based farming within the Ponnivala area itself at this time. What kind of meeting can this be? Surely the Ponnivala artisans will feel pressured and also outnumbered by these many strangers that the king has called to a meeting with them, a meeting in a distant palace that will seem strange and uncomfortable to them.

In essence we can say that this king is “blinded” by his own ambition to expand his farming empire. He wants to send nine loyal ploughmen into Ponnivala precisely to convert its (likely open scrub forest) landscape and bring this still-marginalized area under a new ecological regime: wide-scale crop-based cultivation. The king clearly “stacks the deck” in preparation for this meeting important. How can a small band of artisan, who undoubtedly have walked miles and miles to reach his palace, speak up freely in such an alien atmosphere? Will they be brave enough to express their views and ask for their rights in such an atmosphere?

In teaching this particular clip one can easily refer to modern “citizens’ meetings” called by government officials to gather public input on a new economic policy destined to affect a particular area (say new mining activities, a new pipeline, new windmill construction or whatever). Often the scene that develops is quite similar to the one we will see in the Chola’s own palace courtyard. Meetings then, as now, can be “stacked” with those recruited by the government side. Afterwards the officials preset hope that they will be able to report that little or no resistance to the new idea was encountered. In reality, however, the citizens may have felt too intimidated to speak up. However, nowadays, citizens’ protests at such events are often common as well. What will happen in this ancient story, one may ask? How was the fear of local protest handled way back then?