WHEN DOES A SIMPLE BOUNDARY STONE SPELL TROUBLE? 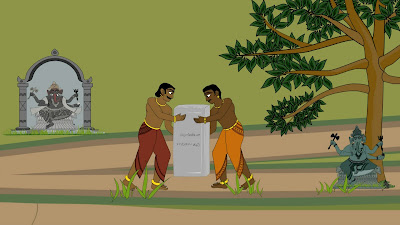 We now enter a new era, so to speak, in The Legend of Ponnivala story. The immigrant farmers have already arrived and are ready to settle in. And, after the happy outcome of Vishnu’s impressive ceremony, they are able to claim a legitimate god-given right to bring the lands of this remote region under the plough. These same plough-wielding farmers also have the clear backing of the powerful Chola king. After all it is he who has sent them to this area in the first place. These men are thus doubly empowered to begin their new way of life in, what is to them, a new land known as Ponnivala.

The Chola king’s influence does not stop with his gift o the lands of Ponnivala to Kolatta, however. He knows that his favourite and loyal ploughman who came to him from Vellivala has eight younger brothers. He wants to ensure their prosperity as well. So the Chola grants them rights to an adjacent territory known as Tangavala. All we know about Tangalvala from the story is that it lies right next to Ponnivala and that the land there is not quite as good. It also does not seem to be a large place. It is certainly not larger than Ponnivala. And so asking eight brothers to share that, while Kolatta, the eldest gets a very fertile and large area all to himself might seem a little unfair. None the less, the Chola king proceeds with his plan. The brothers get together and set up a boundary stone to mark the line that divides Ponnivala from Tangalvala. That is that. In this clip we see that stone being planted. There is an inscription on it that simply demarcates the two territories. The clip is a simple one. But it set in motion a jealousy between brothers, and especially between their descendents. Those males of the next generation, male cousins sharing the same lineage, will be rivals throughout the story. Perhaps the Chola king did not have much choice. Nonetheless, his decision to divide the land in this unequal way will be the cause of much animosity in the future. Although this cousin-to-cousin enmity does not provide an exact parallel to India’s great epic, the Mahabharata, the rivalry between cousins set in motion here, will nonetheless become a prominent theme in a number of episodes to come!

Read Part 21 ==>
<== Read Part 19
Have you experienced The Legend of Ponnivala on TV or in print? Let us know your thoughts in the comments below!

To find out more about The Legend of Ponnivala -- the legend, the series, the books, and the fascinating history behind the project, visit www.ponnivala.com.
Posted by Ponnivala Publishing at 14:45