WHY HAS THIS GODDESS SHRINE BEEN NEGLECTED? 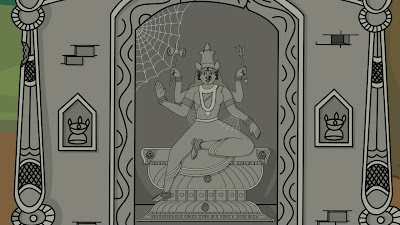 The goddesses who guard the key local areas in this Legend of Ponnivala story are very important. We will encounter three key divine females in this epic, each having their own distinct shrine. These goddesses are Celatta, Kali (who is a kind of Durga-figure) and Karukali (or the black and very fearsome Kali). I will have much more to say about these three females if I continue this blog far enough into to the future to reach their presence in later episodes. Karukali, in particular, does not appear until about three quarters of the way through this long legend. But here let me begin with Celatta. She is the family goddess for Kolatta’s family and she is very important.

In this clip we see that it is the Chola king himself who tells Kolatta that he should worship Celatta. She has a temple in Ponnivala that is there upon his arrival. But it has been badly neglected. No one has cared for her shrine for at least three generations. There is also a Ganeh temple nearby that has suffered the same fate. But the king focuses on Celatta. His instructions are that Kolatta should worship there at least three times each day. The unspoken understanding that the story tellers share with their listeners is that a goddess like this is associated with each local “nadu” or well-farmed (and well-ploughed) territory. When the goddess is well cared for it means that the lands are also being cared for properly.

Celatta is the ecological mistress who looks after the lushness and well-being of the lands that lie around her. Her welfare and that of the agricultural lands in her territory move inlock-step. Whenone thrives so does the other. Furthermore, Celatta also serves as the great goddess Parvati’s local representative on earth. When Parvati initially creates the nine farmers (blog 1.2) she is in a sense placing a part of herself there with them. But the farmers were not told initially to worship such a goddess. The is no mention of such a temple exiting in Vellivala. Perhaps this is part and parcel of its “wildness” and perhaps this is also why Kolatta and hisnine brothers first efforts in farming fail? In any event, the Chola king tells these men now, in no uncertain terms, that paying attention Celatta will be one of their primary duties. He does not say this, but the king certainly also realizes that his own interests are at stake in this. He is hoping to get a share of the farm produce from Ponnivala as the land is developed and becomes prosperous. The Chola king is hoping that Ponnivala will soon become one of his tribute-paying territories. Caring for Celatta will impact on that prosperity, which will in turn impact on his own revenues! Who might have worshipped Celatta here in the past, many generations back? We do not know. The legend does not answer that question. Perhaps it was a group of traders moving through the area who brought their own goddess from elsewhere in hopes of establishing a land claim but never brought this idea to fruition? We do know (from non-story sources) that Ponnivala was once an area criss-crossed by many important long-distance trade routes. Could others have brought this goddess here? Whatever the case, the Chola king does imply that the artisans have neglected to worship Celatta properly. Nor have these (like aboriginal) craftsmen taken to plough farming. The Chola is hoping that Kolatta will change all this, and indeed he will!

Read Part 22 ==>
<== Read Part 20
Have you experienced The Legend of Ponnivala on TV or in print? Let us know your thoughts in the comments below!

To find out more about The Legend of Ponnivala -- the legend, the series, the books, and the fascinating history behind the project, visit www.ponnivala.com.
Posted by Ponnivala Publishing at 02:00