DOES THE LAND BENEFIT FROM THIS FARMER’S PRAYERS? 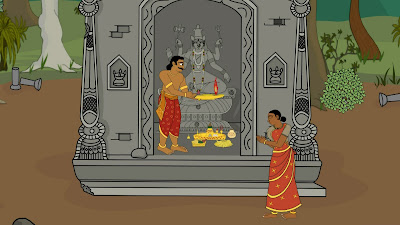 This clip begins with Kolatta remembering the Chola king’s words. He will indeed worship the local goddess of who cares for Ponnivala’s lands, Celatta, three times each day. We see the couple involved in this together. The two greet the goddess respectfully. Then Kolatta’s wife sweeps and clears the area in front of the temple. Finally Kolatta himself waves an auspicious tray in front of the goddess. It holds a small camphor flame that is believed to carry the “essence” of the offerings placed below up to the goddess above. Their actual gift of fruits are placed at her feet along with a vessel of water (used to bathe her statue) and a bell (to help focus her attention on this couple’s act of praise). Another tray bearing a coconut-water pot combo and some incense sticks sits beside the fruits and is given the closest and most central position. What it holds is a traditional sacred symbol that (if I understand the symbolism correctly) makes reference to the on-going mystery and energy of life in the cosmos as a whole. This is a short but lovely ritual called a “puja” and the couple’s execution of the rite is modest but heartfelt. The goddess’ spirit and energy are just beginning to come back to the area after a long hiatus, that three-generation-period of non worship mentioned in my previous blog. This is why the temple as well as her personal icon still have a greyish (somewhat lifeless) look. This will change as Kolatta and his wife continue their worship of Celatta, on a daily basis, over the years to come.

The rest of the clip contains a song that praises the lands of Ponnivala and whose lines recur frequently throughout the performance of this long, long story. The images that illustrate the song are repeated elsewhere and actually show Ponnivala in an advanced state of plough and irrigation-based cultivation. During the song we first see images of local grains and of hay stacks but following these are scenes of young rice shoots being planted and then the moist paddy fields that result from this. This sequences shows a kind of ”crop progression” in crop types that did take place in the area as farming choices (and more importantly, advanced irrigation techniques) changed. But the good, heavy rains shown and abundance of rice also suggest wishful thinking. These are mentioned in songs and the images are used to praise the rule of a “good and generous” king. Good kings bring abundance to the land, just as does the regular worship of a protective goddess. More truthfully, the Kongu area (of which Ponnivala is a part) has never really looked like this! We are listening here to the words of a praise song. The poetic imagery used here to accompany the (translated) song lines needs to be understood in that context.

Read Part 23 ==>
<== Read Part 21
Have you experienced The Legend of Ponnivala on TV or in print? Let us know your thoughts in the comments below!

To find out more about The Legend of Ponnivala -- the legend, the series, the books, and the fascinating history behind the project, visit www.ponnivala.com.
Posted by Ponnivala Publishing at 10:33