WHY IS THIS COW CALLING OUT IN DISTRESS? 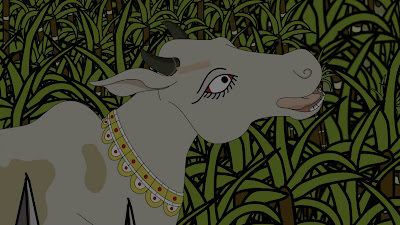 As this Legend of Ponnivala clip opens we see the group of “sacred” and wandering cows, all hungry, emerging from the forest again on a second night. They remember that lush sugarcane field where they dined in secret yesterday and are planning to repeat the same adventure once again. But as they approach the field the lead cow notices that a fence has been built. She warns her “sisters” by saying: “Watch out! Look at that fence!” She then adds a very poignant question: “What kind of landowner would do this to us?” A second cow now chimes in with: “How can anyone be so mean?” However, a third sister remains undaunted. That cow speaks up and bravely states: “That fencing doesn’t look too high. I think we can all jump over it!”

What ensures is sad indeed. The cows are seen to approach the fence cautiously. Next we see that they all have landed on those high spikes and become stuck there. We are spared the details of this gory scene, seeing only the cow’s multiple legs, and then multiple distressed cow heads. Meanwhile the audio track tells it all. The cow-sisters all cry out “Oh Lord! Oh Siva. Help me, help me!” But all their shouting and anguish is to no avail. There are only seven cows now, the rest having wandered elsewhere, but all seven have been skewered and clearly these poor creatures have no hope of escape. The clip ends here.

There is not much to say except that this tragic end for the cows is a key and well-programmed story event of mythic proportions. Its consequences will reverberate until the very end of the legend, and its symbolism will be revisited in multiple ways. Suffice it to say that death on an iron stake or spear point serves as a kind of sacrificial offering to the gods. This kind of suicide is either contemplated and/or done willingly by several characters in the broader story. In the middle part of the legend the heroine Tamarai contemplates jumping off onto a similar array of iron stakes from a high tower. She had earlier ordered a similar group of artisans to build her that tower for this very purpose. She never jumps off it ,as Lord Vishnu manages to coax her down from this dangerous high point before she takes that final leap. But her intention is clear. Later she sit sits on a tower capped by seven needles, for twenty one years, sitting there while undergoing seven mythical deaths executed by Lord Siva’s assistants at his command. Her seven “deaths” in this later set of scenes compensate, in a sense, for the lives lost by the seven female cows seen here. One can arguably say that in this story the heroine’s “seven lives” are taken to be the equivalent of the lives of these seven cows. Later, at the very end of this epic legend this heroine’s two heroic sons also dies on “stakes.” This time they leap forward onto their own swords that have been embedded upright in the soil. Their suicidal leaps cause another set of sacrificial deaths, this time explicitly and deliberately offered. But more of that event at a much later time.

Read Part 29 ==>
<== Read Part 27
Have you experienced The Legend of Ponnivala on TV or in print? Let us know your thoughts in the comments below!

To find out more about The Legend of Ponnivala -- the legend, the series, the books, and the fascinating history behind the project, visit www.ponnivala.com.
Posted by Ponnivala Publishing at 14:47