WHY ARE PEARLS BEING USED TO PAY THE ARTISANS? 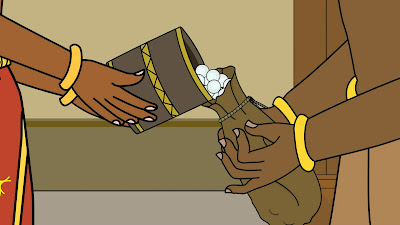 This new clip is quite straight forward but has been included as a possible teaching point for younger students. The scene starts with several good views of the fence being built followed by a wider vista of the artisans’ finished work. Clearly this fence is a vicious obstacle. It has been designed to severely harm any animal that might try to jump over it (see my last blog, post 1.26). Heard behind these several scenes is a song taken from the original story’s tape village recording as bards sang it to a live audience in 1965 (see log post 1.2). One can “hear” the tone and style of the song in this particular clip because no narration has been laid over it. The bards one can hear are signing about the artisans’ workshop and the fine work being accomplished there. You can almost hear the sound of their hammers in the beat being used!

In the ensuing scene clip the farmer is paying his artisan(s) for their work, in pearls. The group leader has stepped forward to receive that payment on behalf of the whole group of artisan workers. It was the custom in earlier times to pay labourers in ”kind” rather than in cash. Although some coins were in circulation, common peasants had little use for these bits of metal and even less understanding of their value and of how to count them out. In this case pearls have been chosen to pay the artisans, something particularly appropriate since these same artisans may also well have had some among them who were jewelry makers. At least in the Legend of Ponnivala, artisans are artisans. Sub groupings are not clearly distinguished. The “acaris” as group (a generic name the epic uses for this large cluster of trades) appear to have multiple skill sets and they all live in one settlement (Aniyappur). Different skills are called upon on different occasions. I will return to what happens to those poor cows in my next blog (post 1.28).

Read Part 28 ==>
<== Read Part 26
Have you experienced The Legend of Ponnivala on TV or in print? Let us know your thoughts in the comments below!

To find out more about The Legend of Ponnivala -- the legend, the series, the books, and the fascinating history behind the project, visit www.ponnivala.com.
Posted by Ponnivala Publishing at 15:34