WHY HAVE ALL THESE TREES BEEN FELLED? 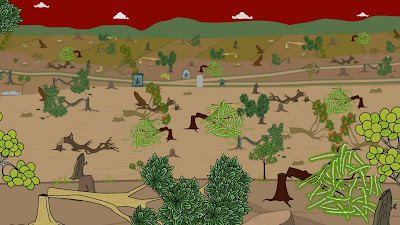 This short and simple video excerpt is included here as a set of add-on comments that build on my last blog (1.22) where one of the regularly repeated songs in the The Legend of Ponnivala epic is featured. That song speaks about the beauty of Ponnivala, its ripening fields of paddy and its lush, green landscape vistas. My commentary there suggested that this is an ideal image, a state of abundance that was likely never quite achieved. The Kongu area is an upland plain originally covered with what one might call “scrub forest.”
In the Ponnivala story, the farmers’ clan ancestor Kolatta first “wins” Vishnu’s ritual contest. The outcome of that public event causes a major social earthquake: the independent artisans who previously enjoyed control of the lands of Ponnivala are displaced as its chieftains. They are shifted out of their former “seat” of control and transformed, via Vishnu’s public covenent, into a subordinate group of service providers. Hence forth they will now be dependent on the farmers for their food supplies. But that is just half of the story. Now that Kolatta is free to begin his own life in Ponnivala he sets about the several kinds of physical work that will be needed to support such a major social change. His mission is to bring his piece of the Kongu area, Ponnivala, under the plow, so as to transform the area into lush food-producing tribute-paying region. After all, he has been sent here to follow up on a command to do this that was issued by the highest authority in the land, the Chola king himself.

First we see an image of Ponnivala under great stress. The landscape is covered with felled trees. Admittedly, however, these “corpes” from the past do not come from a thick, tropical forest. Instead, the tree stumps are scattered across a sparsely wooded landscape. This is realistic. The Kongu plain was more of an upcountry, grassy open landscape than a truly forested area. This is why the local artisans had previously been able to survive there, supplementing their craftwork and trade activities with animal herding. Their planting activities were (one imagines) likely limited to plots of millet seeded using simple hoes and iron-tipped sticks. But now that Kolatta and his relatives have cut down the scattered trees the area looks forlorn.

Next we see the hero Kolatta walking behind a plow. It is pulled by two oxen. Furthermore, this pioneer farmer is accompanied by an associate, likely one of his brothers, who is wielding a second plow that moves across the earth in exactly the same way. Significantly, the enmity between the members of this male lineage does not start right away. In the first generation the nine brothers work together, at least as far as one can tell from the sparse details on this the story gives. It is only in subsequent generations, when these brothers’ families give birth to sons who are cousins, that cracks in this family’s solidarity begin to appear. The third scene provides a view of the landscape after its full, physical, transformation. This image is a little more “realistic” than the one that accompanies the song passage (blog 1.22), but it still tends towards idealism... showing a landscape with quite a bit more paddy than would have actually have been likely at this early stage. It is there, no doubt, because the narrator is trying to stress that the area “has greened” and changed so much as a result of Kolatta’s hard work. He is after all the story’s pioneer ancestor. His good works and epic farming skills have thus been given a status that is a bit “larger than life.”

Read Part 24 ==>
<== Read Part 22
Have you experienced The Legend of Ponnivala on TV or in print? Let us know your thoughts in the comments below!

To find out more about The Legend of Ponnivala -- the legend, the series, the books, and the fascinating history behind the project, visit www.ponnivala.com.
Posted by Ponnivala Publishing at 15:19