WHAT HAS HAPPENED TO THE SOCIAL STATUS OF THE ARTISANS? 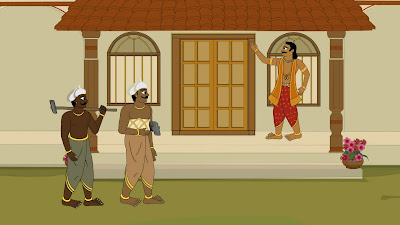 In the last clip (blog post 1.25) we saw the Chola’s cows eating their fill in Kolatta’s fine sugarcane field. They then leave, as a group. They are still able to move undetected in the darkness of the night. But then the sun rises and the farmer-hero-pioneer sets out to check on his ripening cane (a short scene not shown here). As the present clip starts he arrives at his field and is horrified to find his fine sugarcane badly trampled..Many stalks have been chewed up as well. Kolatta is very upset by all this destruction. He is in such distress and so angered that he barely takes the time to ask himself what animal(s) could have caused so much damage? He quickly turns and calls his watchman. He demands that the artisans be called and brought to him immediately. A fence must be built. This invasion has to be stopped!

The watchman goes to the artisan’s homes right away. There he announces the “the king” of Ponnivala has ordered them to come right away. This alone is quick revealing of the artisans fall from their previously powerful position vis-a-vis Ponnivala. Kolatta is by no means a king (yet) and still he is described as such by the watchman. Furthermore, he is ordering these artisans to come, and right away! The men dutifully pick of their tools and go with the watchman. When they reach Kolatta’s home they stand on the ground while he, their superior, stands on the porch where he is head and shoulders above them. The artisans address Kollata as “Lord” and he takes this greeting for granted. He then gives out his instructions for a fence and tells them to start their work immediately. There is to be a post every three feet and each post is to have a pointed spear head on it. The artisans do as they are told and set to work immediately. The change in their status is thus made very obvious. These men have now become mere service providers, skilled labours who are given just a minimal amount of respect. For more detail on this key social transformation see my previous blogs (Posts 1.13 - 1.19 plus 1.23).

It may also be significant (no coincidental) that the artisans are the ones to do the ”dirty work” of putting a vicious spearhead on each post. In an indirect sense it is their fine craftsmanship that will (as we shall see in my next blog post) become physically responsible for the ultimate death(s) of those poor, hungry, itinerant Chola cows. There are several ways, in later episodes, that depict ways the artisans find to take “revenge” against the newly-established farmers of Ponnivala. Though not stated in the story as such, this could be the start of that “trend.” But they are just following Kolatta’s orders and doing his bidding you might say. That is true, but they could have warned Kolatta, or asked what animals he was trying to keep out, or made the pikes less sharp, less murderous. Why does that matter? The killing of a cow is a serious offense in this story as well as in many other contexts that are part of a much larger umbrella of pan-Indian Hindu traditions. Kolatta will become the man considered responsible for this sin, and the one to bear the full weight of Siva’s wrath. But is it totally unreasonable to think that, just maybe, the artisans might have been secretly happy about this. Could they have had any inkling that such a circumstance might come to pass?

Read Part 27 ==>
<== Read Part 25
Have you experienced The Legend of Ponnivala on TV or in print? Let us know your thoughts in the comments below!

To find out more about The Legend of Ponnivala -- the legend, the series, the books, and the fascinating history behind the project, visit www.ponnivala.com.
Posted by Ponnivala Publishing at 15:00