WHY IS THIS CRADLE EMPTY? 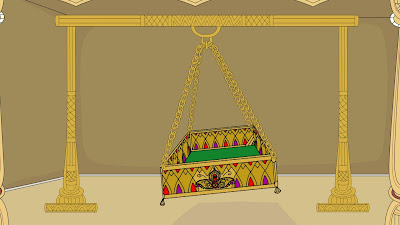 In the last clip, and its associated blog, we saw seven poor cows die cruelly on a staked fence. Although my comments interpret this as a sacrificial event, the cows themselves are innocent of this larger picture. Yes, they jump deliberately, but with the hope that they will sail over that fence rather than land on its vicious spikes. That fails to happen. Now, in this clip, we first see the spirits of those poor cows leaving their dead bodies. Their afterlives, depicted now as shadows, quickly float upwards to the edge of Lord Siva’s own Council Chamber. Lord Siva notices their arrival, of course. He quickly asks: “Oh cows! Why have you come to see me?” The cows retell the events that led to their tragic death in Ponnivala, but without naming the farmer Kolatta directly.

Lord Siva gets angry and quickly calls on his accountant Chitrabutira. Siva then orders this actuarial secretary to go and quickly fetch his record book that keeps track of the details of all the various human lives lived on earth. “Find out who was responsible for the terrible death these seven cows have suffered!” he orders his secretary pointedly. The accountant responds that it is Kolatta, the eldest of the nine farming brothers who work the landsf Ponnivala, and also a neighbouring area called Tangalvala, that is responsible. Siva responds with additional anger, rightfully or perhaps righteously, since it is considered a “sin” to kill a cow as discussed in several of my earlier blog posts. He will react by cursing Kolatta and his descendents to seven generation sof barrenness. This explains the ”empty cradle” scene where the clip ends.

But the significance of Lord Shiva’s curse goes way beyond this curse of barrenness or, might we say infertility? This “fate” that will visit not only Kolatta’s own wife, but also the women who marry into the family in later generations. Of course this is a typical tale set up, a “lack” that must then be overcome as the characters of the story struggle to keep their family “line” alive. The lack of “biological” children (especially sons) is also problematic in terms of the succession of family property rights (in palaces, in land etc.) but it is also problematic in terms of who will succeed to their political “kingship” (both the roles and the title) that this family will soon acquire.

One might also fairly ask, as have many of my students, how can a family persist through seven generations if there are no children born to it? The answer, of course, is by adoption and/or by the magical birth of god-created, divinely gifted children instead. The curse is thus also a gift.... in the sense that it allows this family to acquire its’ heirs in magical and god-sired ways instead. Also epic heroes require some kind of super-human qualities that will make them bigger than life. The Ponnivala heroes (and heroines) acquire this important set of character traits, at a very fundamental level, because of this all-important curse. And not to put too fine a point on it, those key features that can be said to describe each and every hero and heroine in the Ponnivala story flow from this initial and very symbolic “mythic sacrifice.” The Chola king’s seven sacred cows therefore end up being very important creatures whose living presence as a group, followed by a set of simultaneous sacrificial deaths, play a central role in defining this great epic’s wider structural form.

Read Part 30 ==>
<== Read Part 28
Have you experienced The Legend of Ponnivala on TV or in print? Let us know your thoughts in the comments below!

To find out more about The Legend of Ponnivala -- the legend, the series, the books, and the fascinating history behind the project, visit www.ponnivala.com.
Posted by Ponnivala Publishing at 08:32