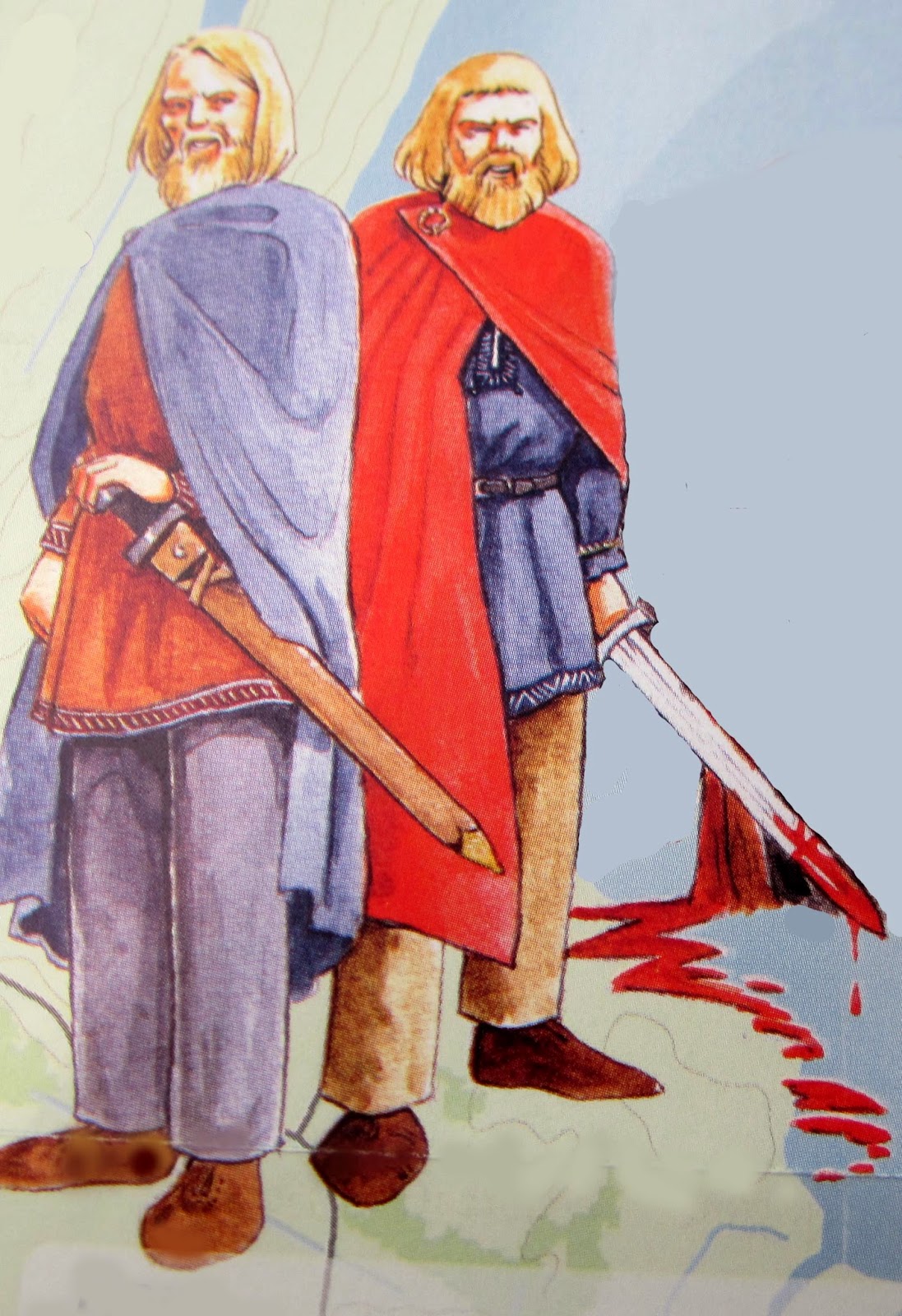 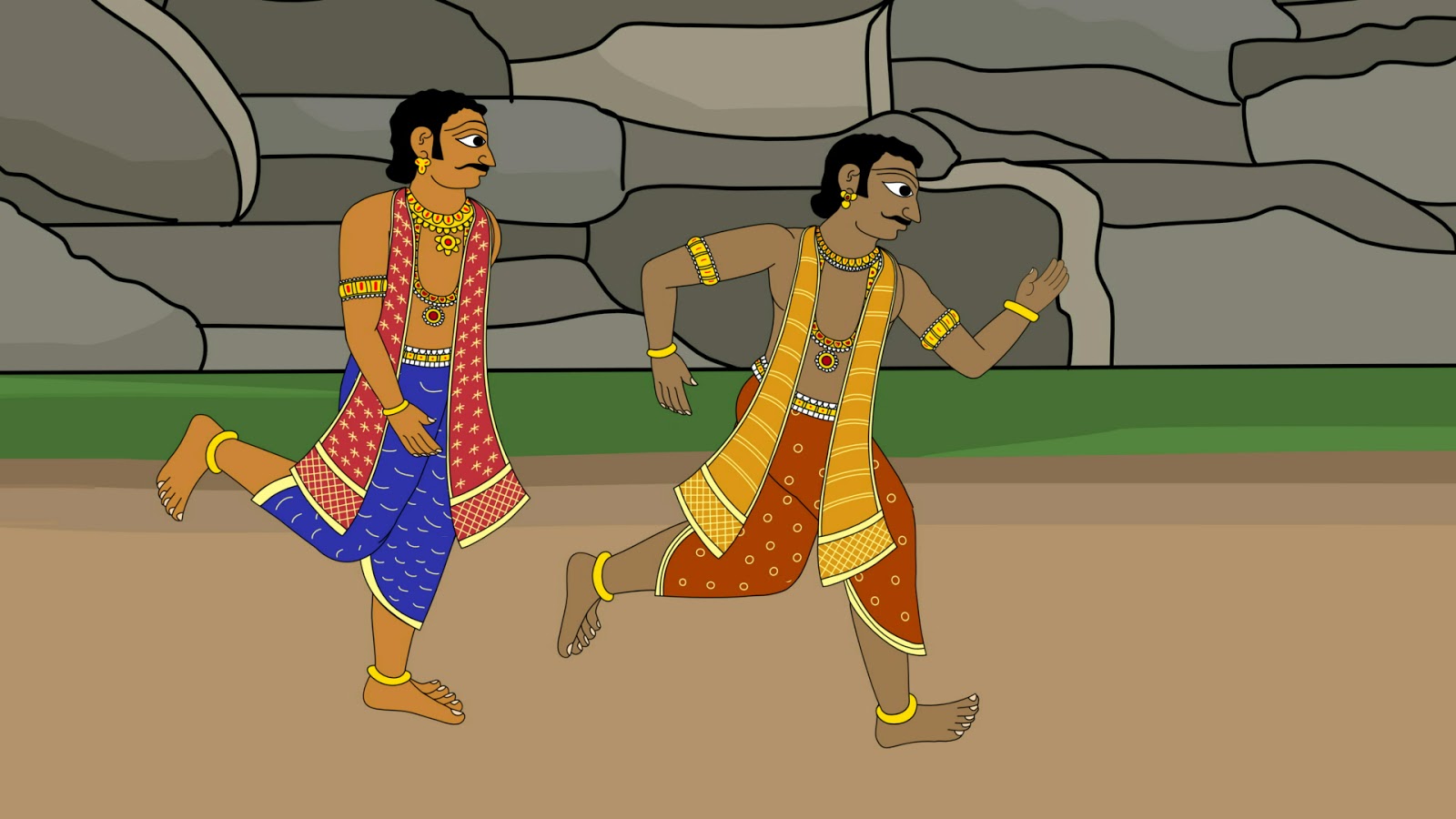 The contrast between a pair of elder and younger brothers is a key theme that can be found widely in the world’s folklore. In is no surprise, therefore, to find this concept imbedded in both the Vatnsdaela Saga and the Ponnivala legend. Nonetheless, certain very noticeable similarities provide for a striking comparison. In both stories two key brothers often appear and act together as a set, even though they differ in significant ways, personality-wise. In both stories, too, this prominent brother pair are heroes who appear only in the third generation, or indeed even later if one counts the cursory mention of several additional ancestors in the Vatnsdaela case. In both tales, as well, the elder brother is the more passive, thoughtful and compassionate while the younger is the more aggressive, faster to anger and always quick to sense an insult. Note that in the image shown here that Thorstein (the elder one, in the blue cape) holds a sword but it is still in its sheath. Standing right beside him is Jokul (the younger one, in the red cape). Not only is his sword unsheathed but it is covered with blood! In the second image we see the two Ponnivala brothers (Ponnar the elder, in blue pants and Shankar the younger, in red pants). Shankar is in the lead and his arm positions are more energized, clearly showing that his elder brother (with lowered arms) is the “follower.” 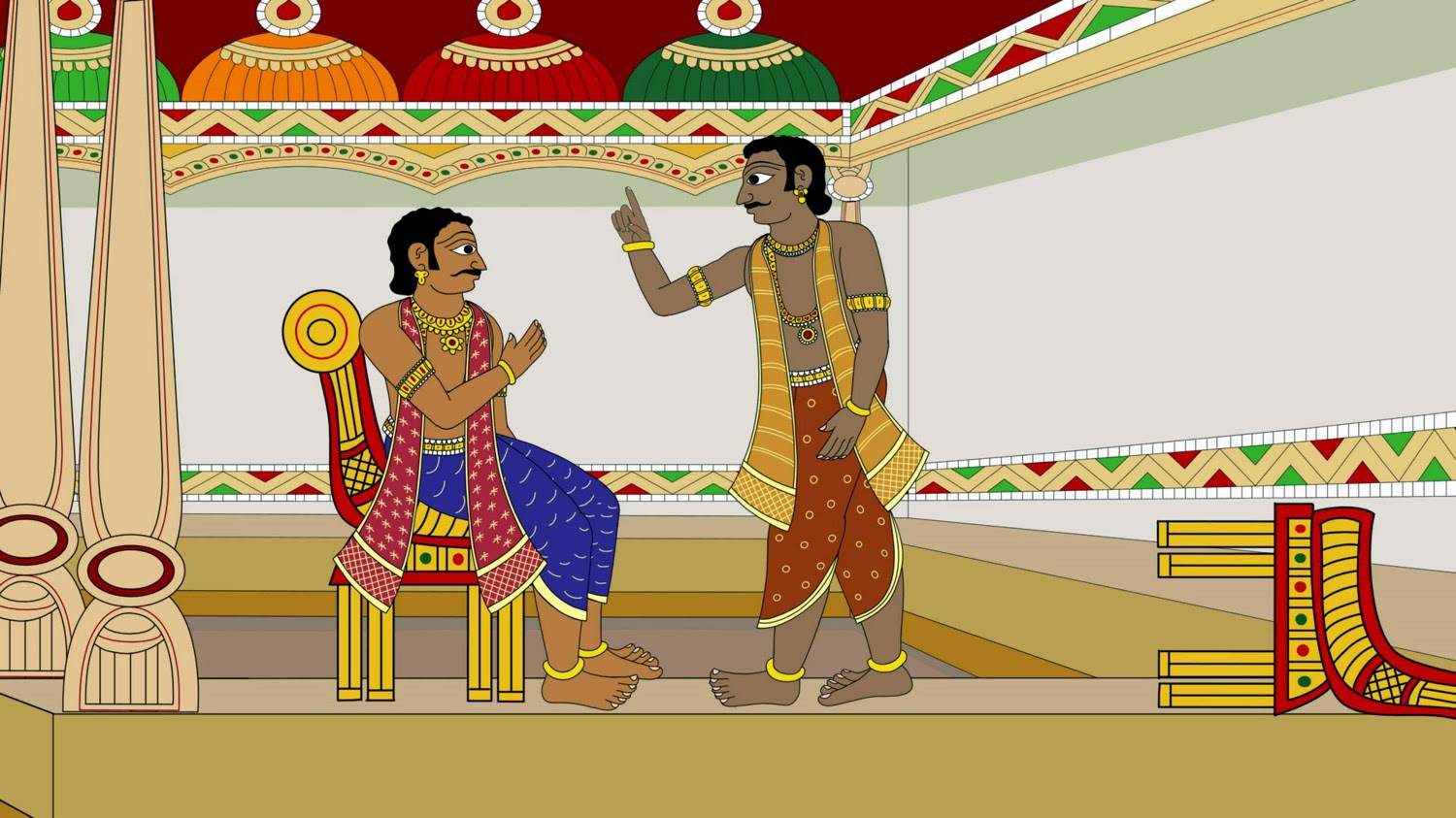 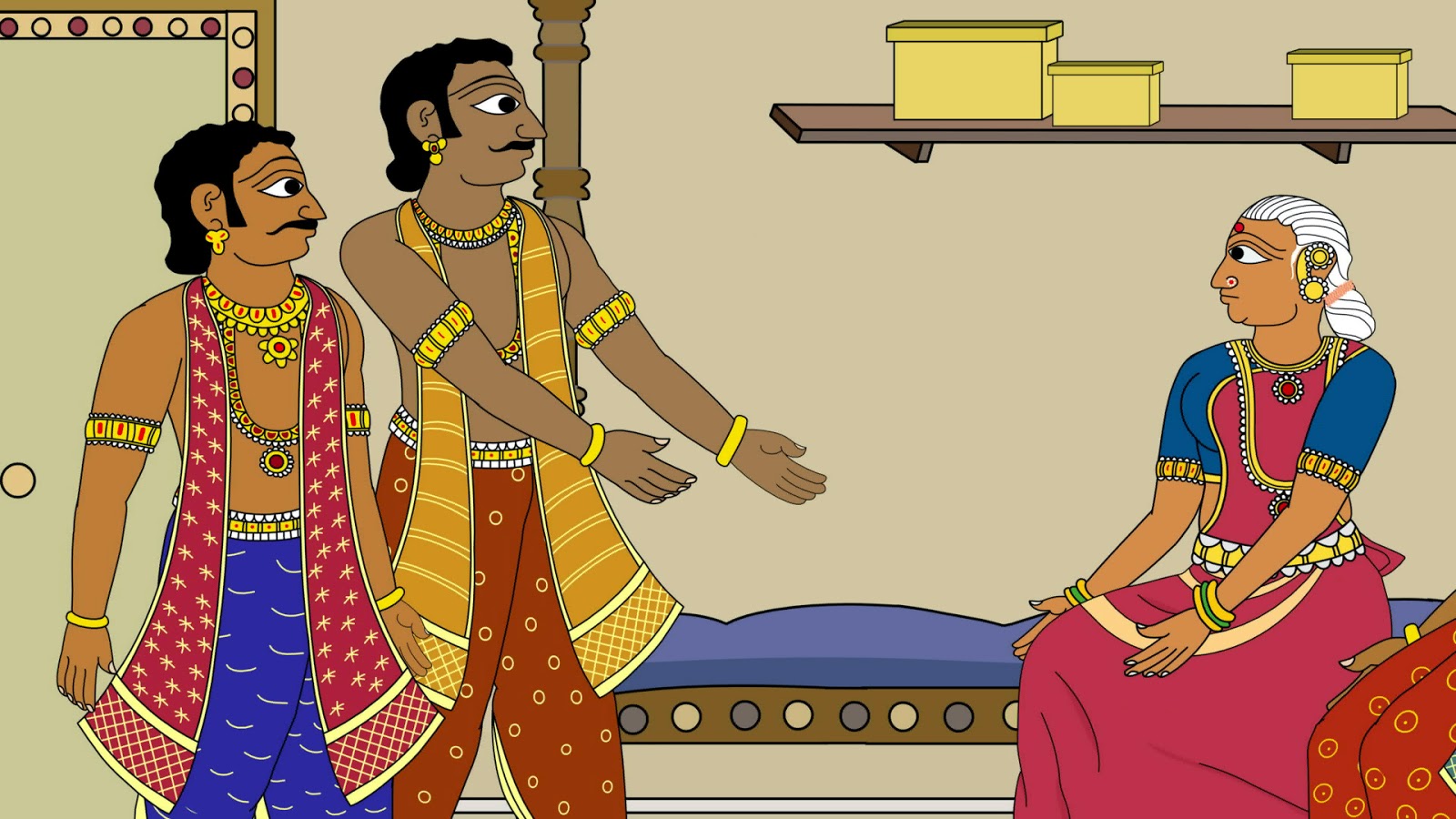 There is not as much visual detail available to me for the Vatnsdaela Saga as there is in the Ponnivala case. But the principle concept, a key contrast between these two Icelandic heroes is nonetheless well developed by the story teller. Looking at the Ponnivala case in more detail I will just share a few (out of many) telling scenarios. First we see Shankar accusing his brother of being timid. He wants to go on a raiding expedition, but his elder brother is holding back, saying that their parents warned them both about taking this kind of warlike initiative. Shankar’s argument wins the day and Ponnar follows him on an expedition only his younger brother has planned. In the second scene we see the two brothers standing before their mother discussing their potential marriage. Neither brother wants to marry but their mother is insisting. Shankar makes the main argument while his brother Ponnar, standing close by, simply complies. The two end up marrying but resist is subtle but clever ways, all of which are invented by Shankar. 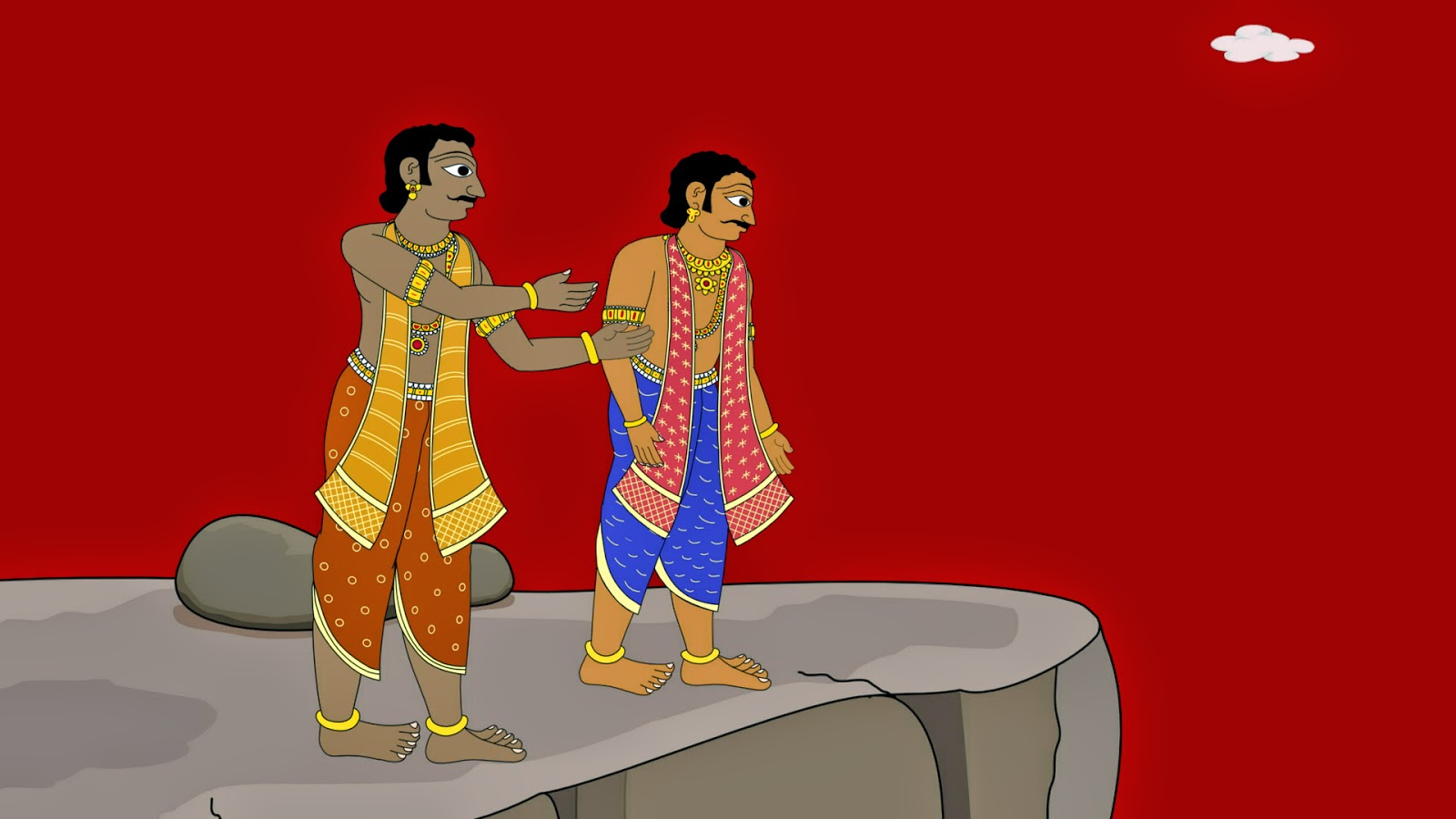 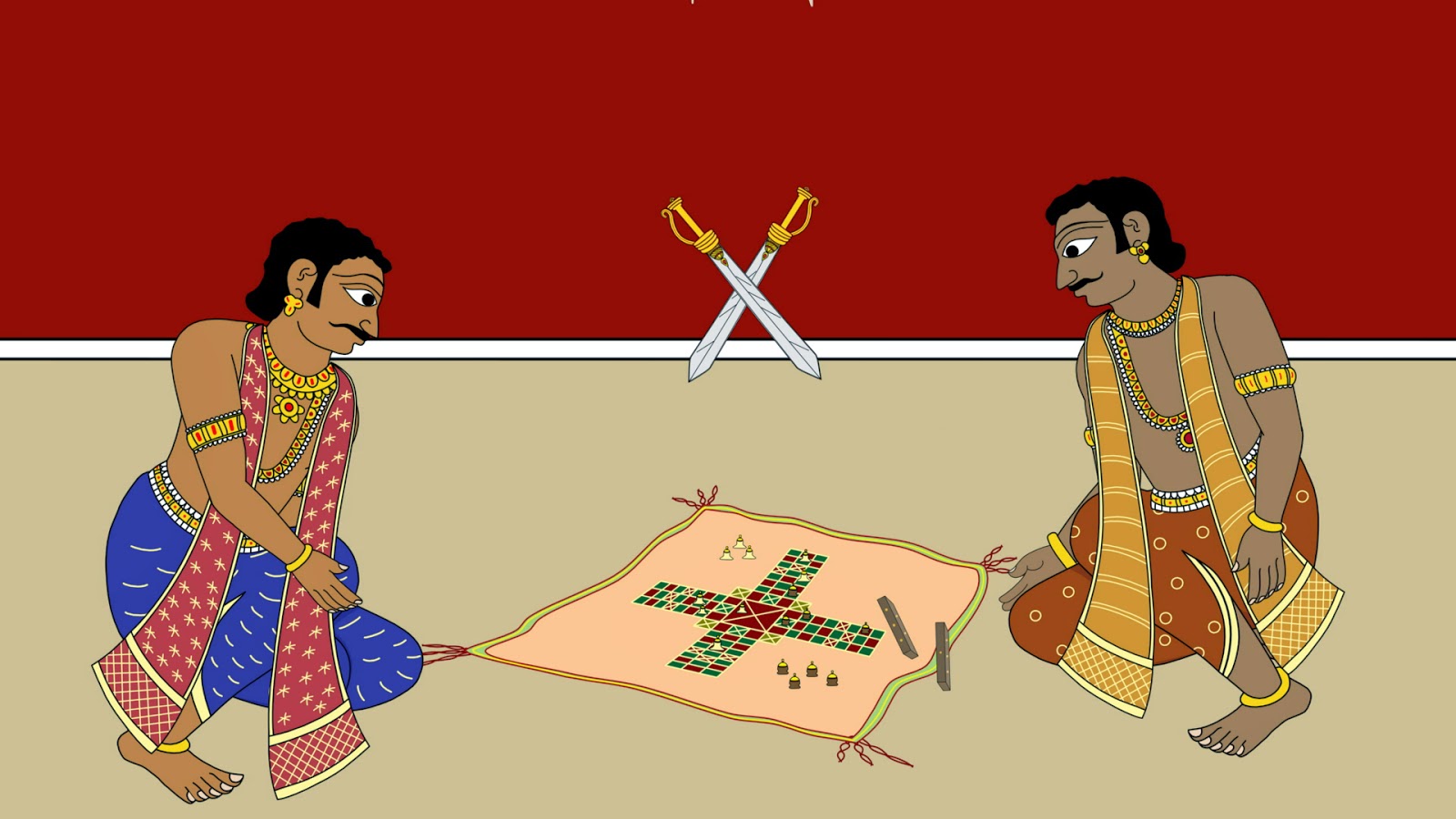 In this scene the two brothers have been stranded on a mountaintop by the Chola king. Shankar is complaining to his brother about his lack of willingness to challenge the Chola monarch. He blames Ponnar for their dreadful dilemma. Ponnar remains passive, implicitly accepting his brother’s criticism. In the second image the two brothers are seen playing dice in their palace gaming room. This game is a key predictor of terrifying events that follow soon after each gambling contest. Hence once again Shankar is the keener player, the man who throws the dice more forcefully. (Lord Vishnu even has to tie him down with an invisible chain at one point). Meanwhile his brother Ponnar keeps him company but always behaves as the secondary player.

The core relationship between a set of two key heroic brothers is consistent across both story worlds. The elder is always the more contemplative and passive while his younger counterpart is portrayed as the “real” aggressor, a man to be feared and at times, even terrifying. Furthermore the more aggressive character in a heroic twosome is commonly the greater folk hero. Certainly Shankar is favored by legend over Ponnar. Jessie James the bank and train robber had a brother, but he was the real dare devil who killed many men and became the popular folk hero of many legends. Folklore often glorifies bravery and even bullying. But in the background there will usually be a complementary character (most likely a sibling) who balances out the unpredictability of that lead character by exhibiting significantly more restraint and calm-headedness.