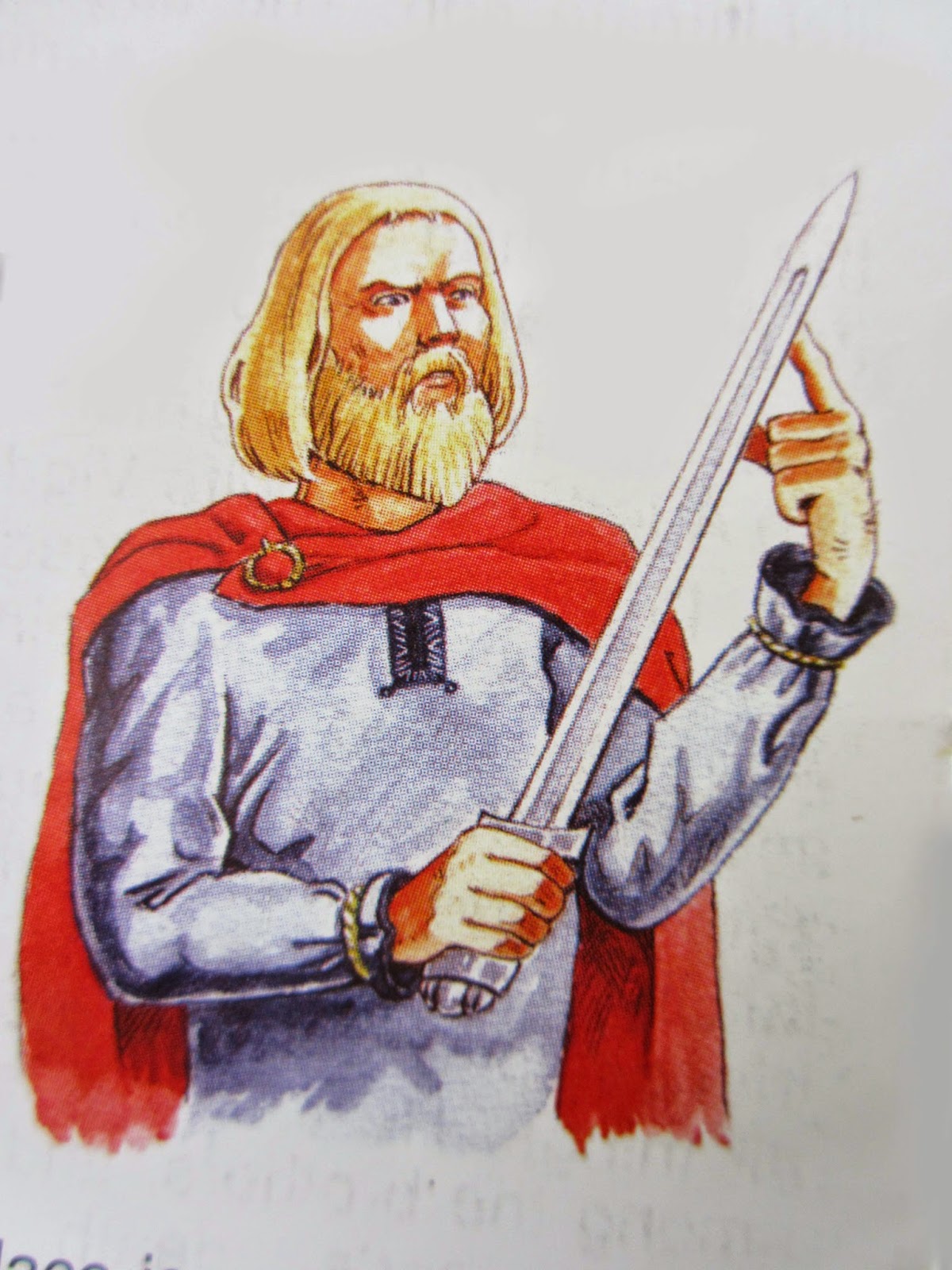 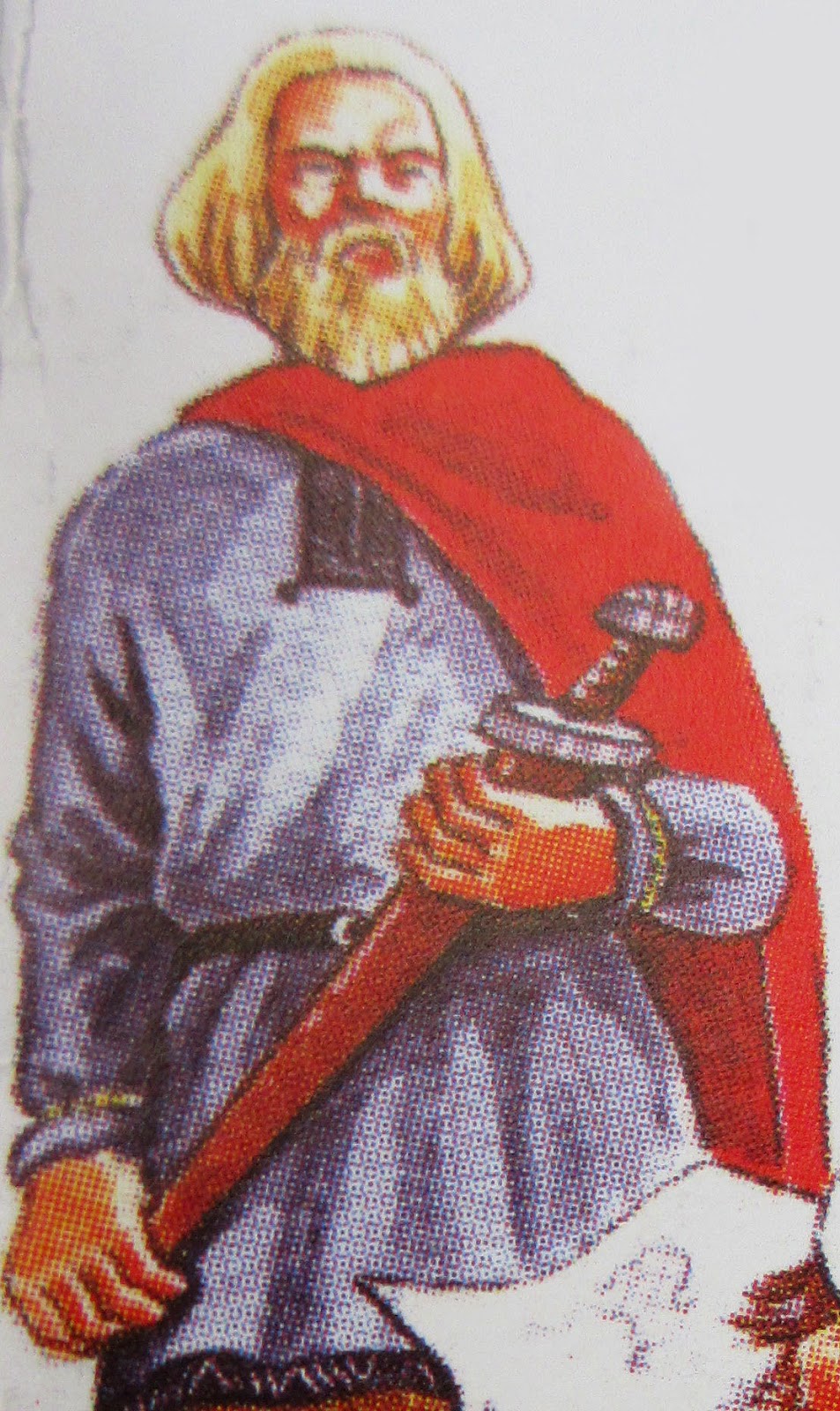 The topic of magical tools been touched on several times in previous segments of this blog series. In each segment I am attempting to compare the Vansdaela Saga from Iceland with the Legend of Ponnivala from Tamilnadu, India. However, it is sometimes helpful to revisit a topic discussed earlier but when discussing it a second time to take a different point of view. In the Icelandic epic the family sword has its own name, Aettartangi. That sword is believed to contain magical power. It is a magical tool. Aettartangi continues to hold its special qualities over time. The sword and those special traits are passed down in Ingimund’s family from generation to generation. Even the hilt of the sword is imbued with special importance. 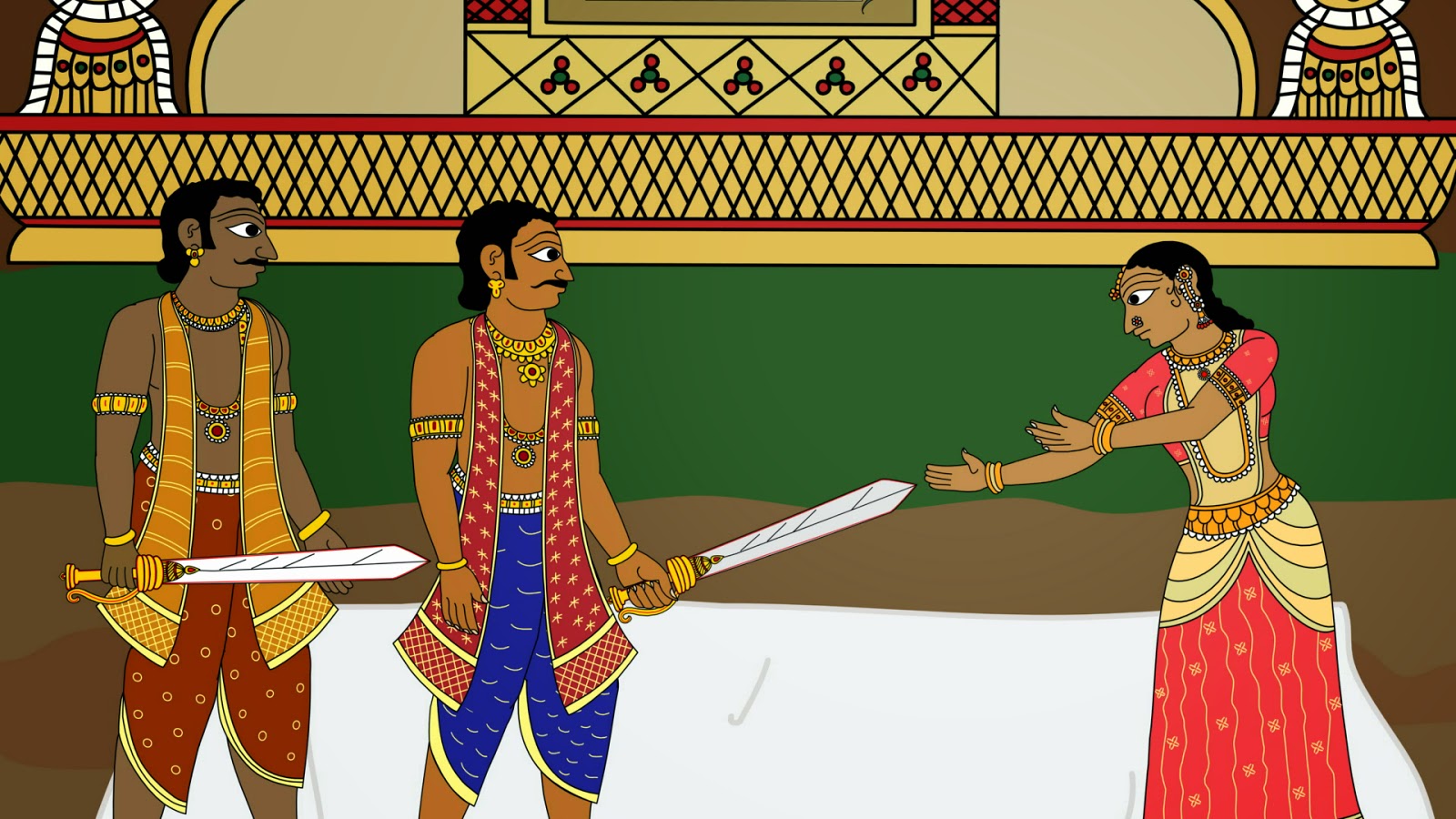 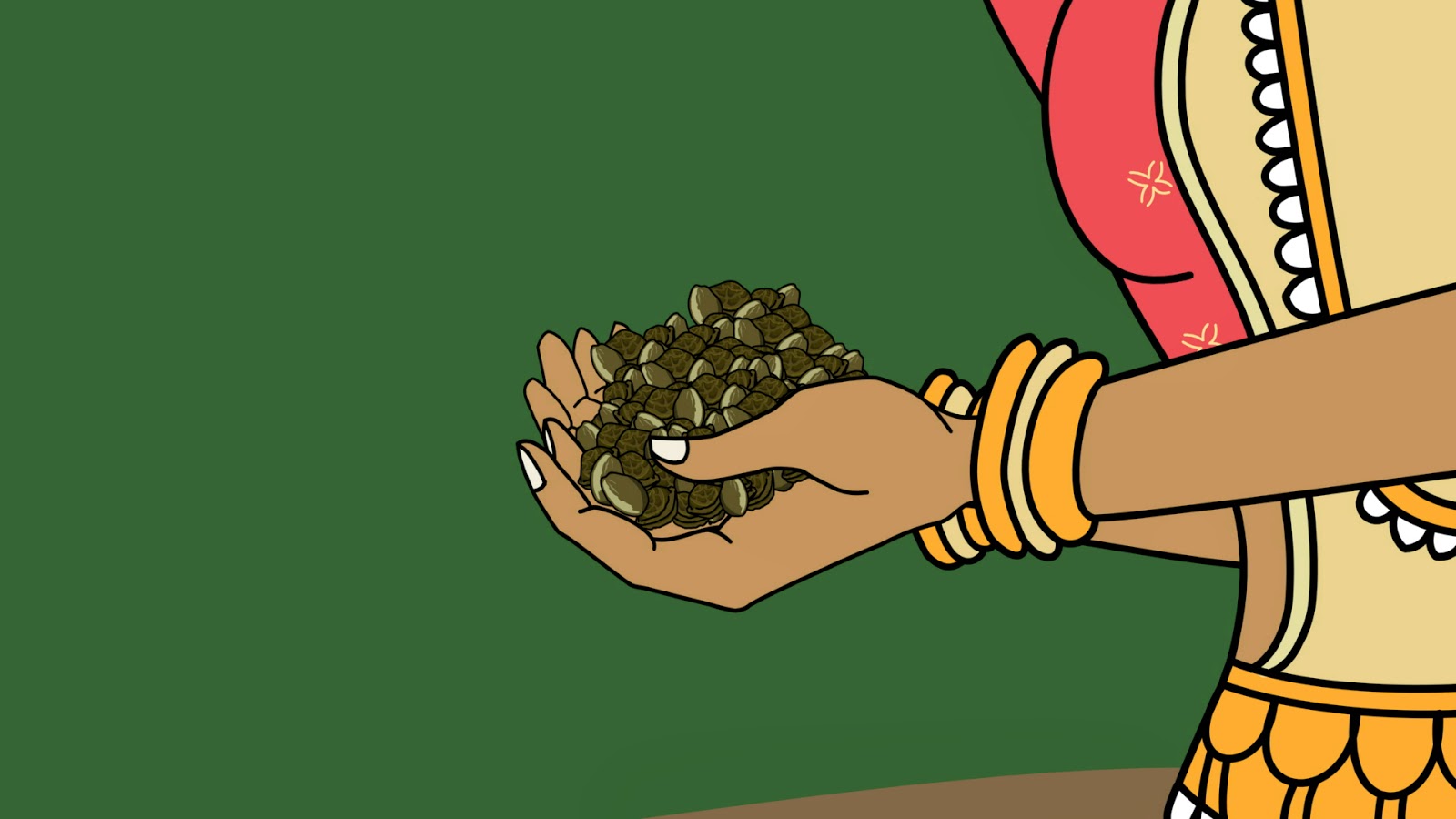 Swords are also important in the Ponnivala Legend too. But in this case that special power contained in the two heroes’ weapons derives from a virgin’s blessing and it has to be re-applied each time they face a major mission. This second image shows a related item or substance that the sister uses to assess whether to proceed with such a blessing, when and if asked. First she tries to divine the outcome of the upcoming confrontation. For this she employs a handful of mustard seeds and pepper corns. As Tangal throws these in the air her brothers are supposed to split each one open with their swords. When the seeds fall back to earth on the white cloth she has laid out she then scoops them up and examines their condition in a winnowing fan. In a similar action, Tangal separates the split from un-split seeds and then uses the result to predict how many enemies will be killed in the anticipated battle. Un-split seeds represent enemies who are not killed. Her divination method, not surprisingly, is related to the tools and cooking items a woman would normally uses in real life. Winnowing fans are regularly used to separate grain from chaff. 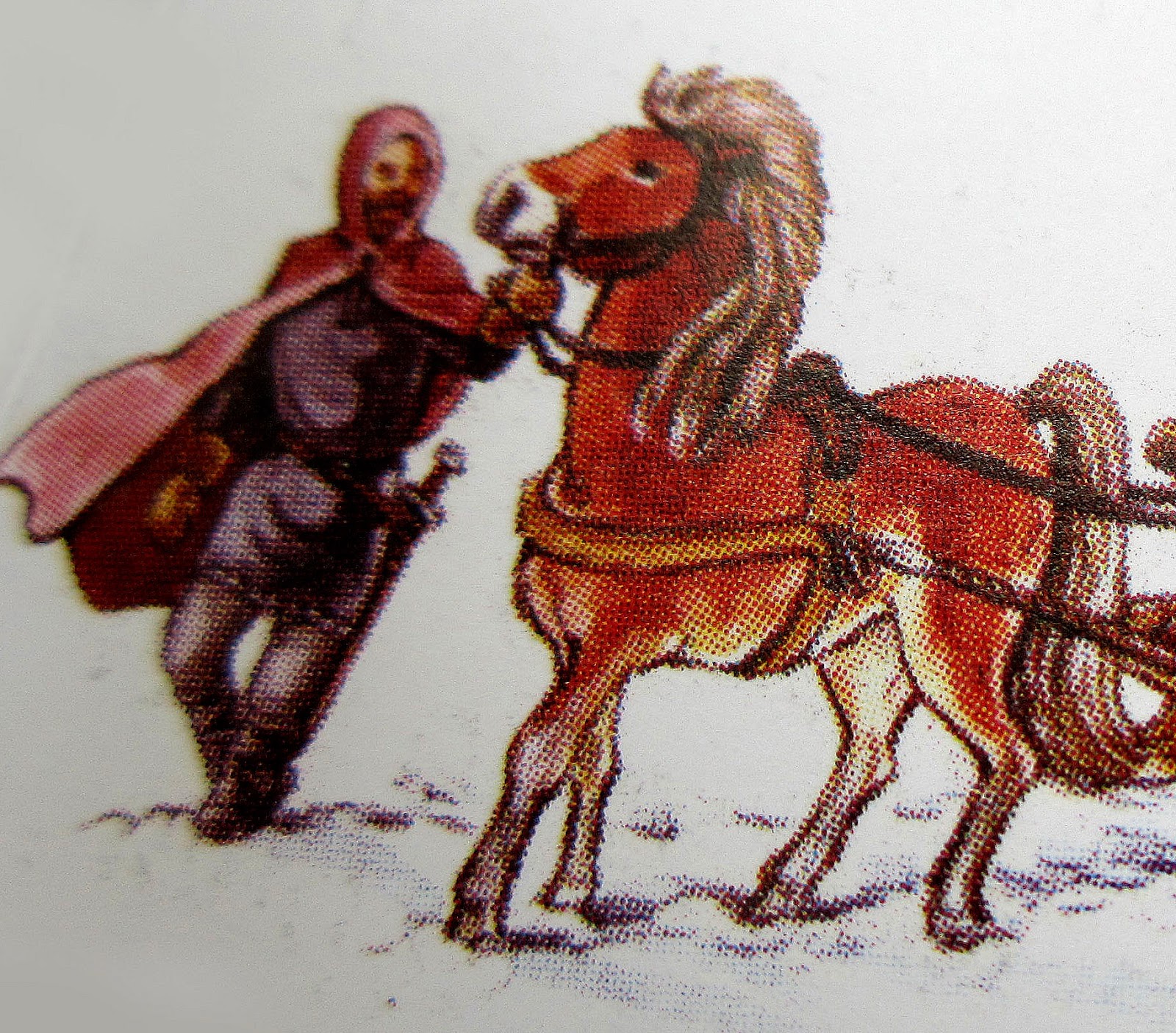 In both these cultural foundation stories, the Icelandic and the South Indian, a hero or the heroine’s vehicle can play a role. The Vatnsdaela Saga features a magical horse, named Freyfaxi owned by a man named Brandur who was a friend of the heroes. This horse pulls a winter sled, an efficient method of transport useful during much of the year in Iceland’s snowy climate. In this first scene the two brothers Thorstein and Thorir enjoy a comfortable ride on the sled where they are covered with warm animal skins, while the horse’s owner and Vatnsdaela’s aggressive younger brother Jokul walk beside it. All four men are expecting to confront two threatening adversaries, Berg and Finnbogi at their destination. 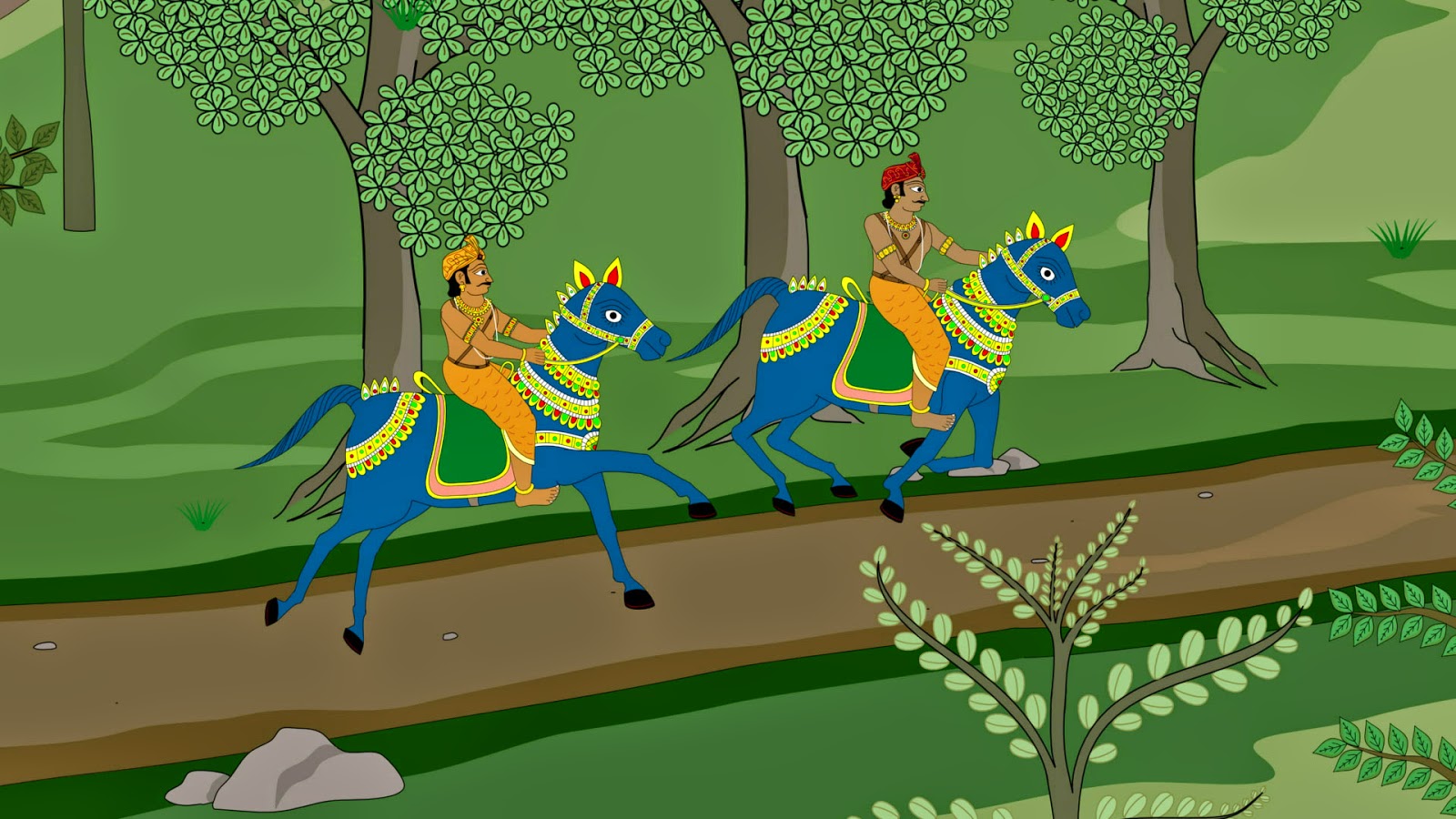 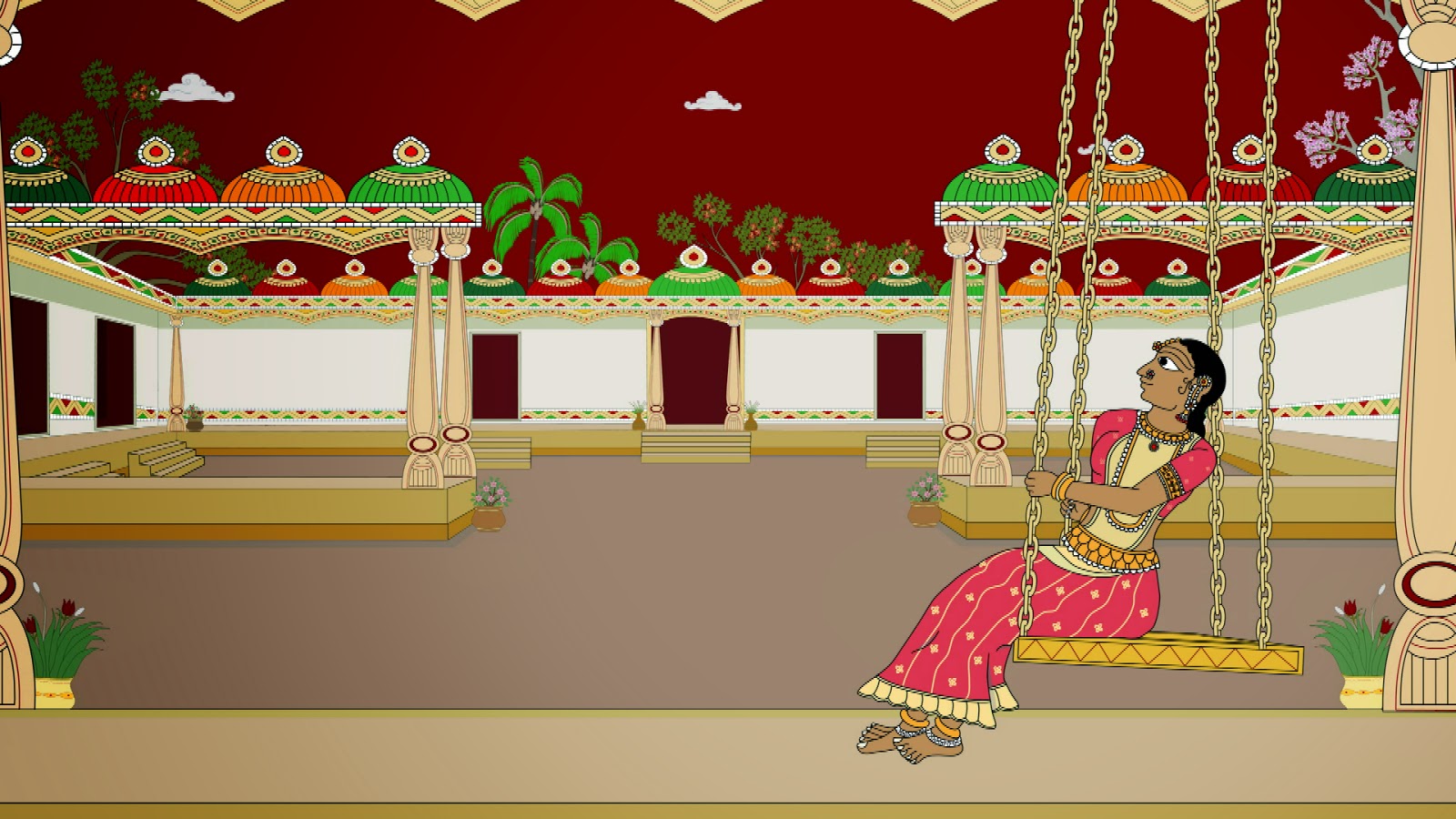 In the Ponnivala story the two heroic brothers each ride their own magical, blue-black horses. Their twin steeds are said to run with lightning speed while crossing very difficult types of terrain. These animals serve as Ponnar and Shankar’s magically-endowed vehicles. But there is a third sibling, Tangal. Her vehicle is different. She “rides” inside the house on a regular basis, in her lovely swing. That swing is located at the center of the family’s inner courtyard, a place open to the sky above. Its regular movements make the swing resemble a vehicle. We can suspect that it also has magical properties because it is only when Tangal is riding on it that she is privy to important, predictive dreams. 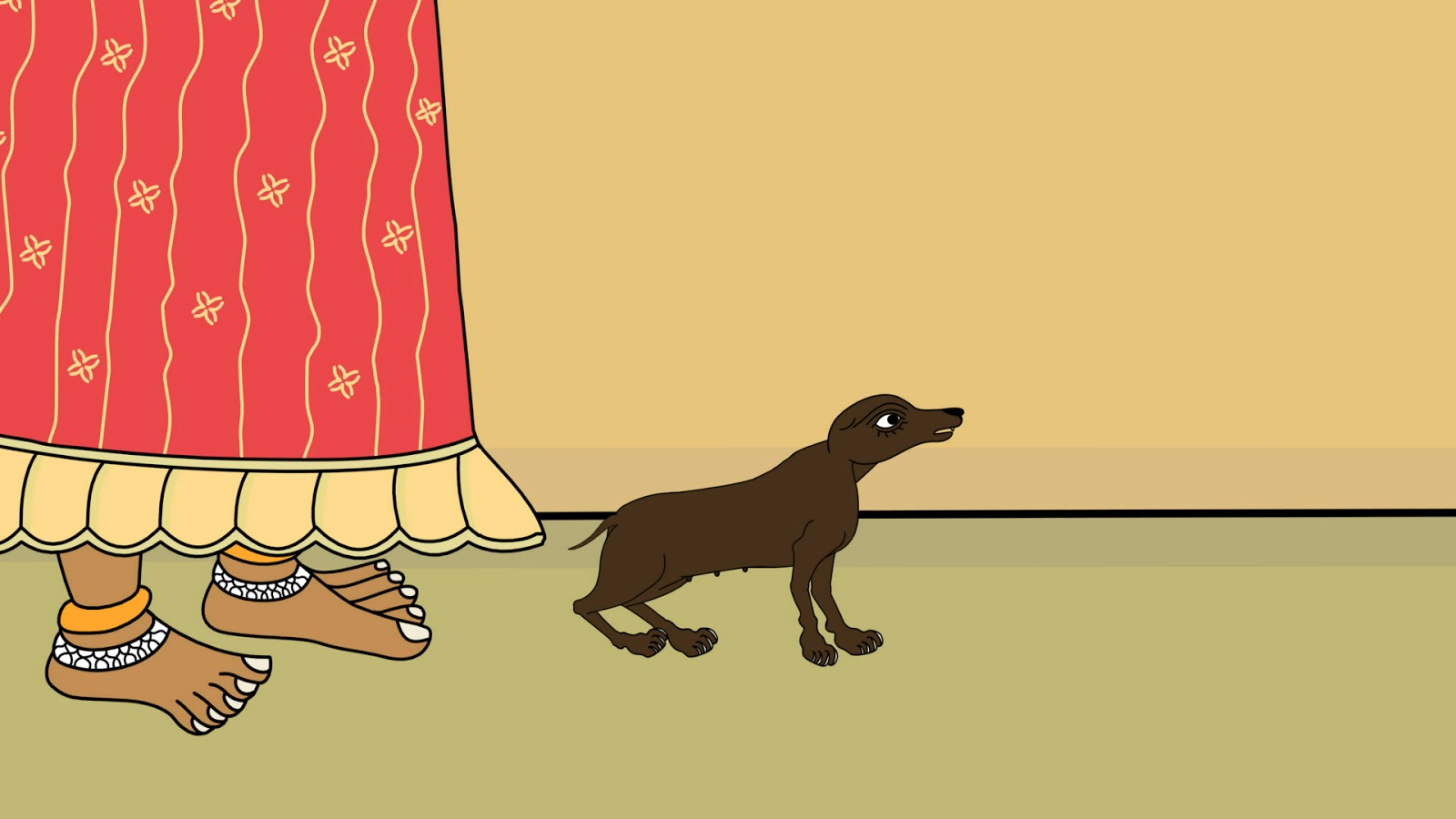 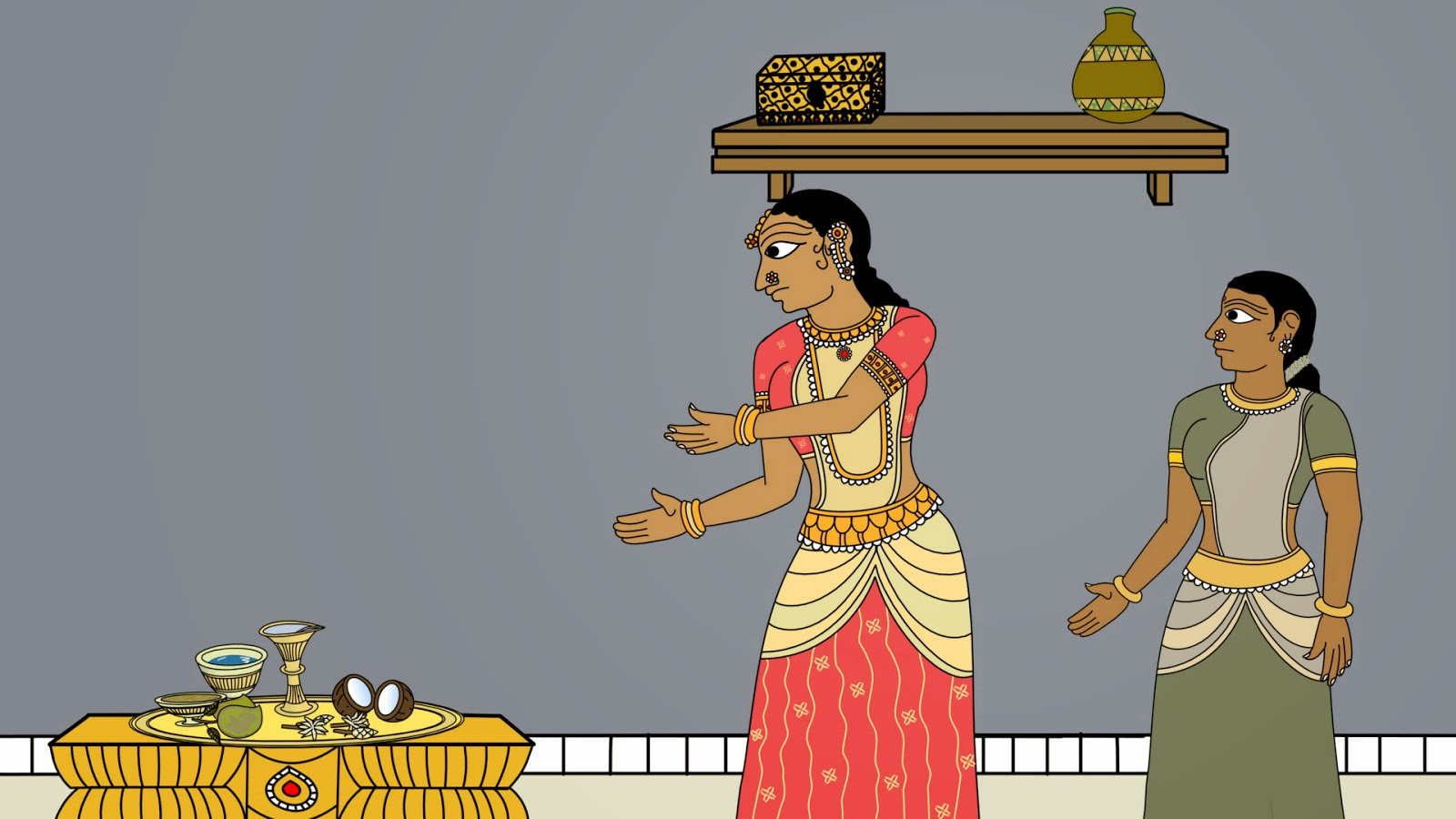 There are other magical tools that Tangal uses in the Ponnivala story. One important one is her little dog, Ponnacci. Ponnacci allows Tangal to operate at a distance. We can think of this little dog as embodying this young girl’s “alter ego.” Ponnacci can leave the familu palace at will. Furthermore, as a very small she-dog she is able to insert herself into a scene unobtrusively. But Ponnacci’s bite can be fearsome and her logical powers are put to good use too. This little pup talks, reasons and acts as a human. She is a kind of vehicle that travels great distances while Tangal herself stays in her home palace. Ponnacci seems to have Tangal’s mind and personality imbedded deep within her tiny body. Ponnacci also has powerful dreams, just like her mistress does. These dreams have the power to inflict pain and suffering. They are something like the negative powers a sorceress has. But Tangal doesn’t only work through animals. She also uses “signs” like those on the tray in this image. These signs absorb the impact of events happening elsewhere. Tangal uses them to learn that her brothers have just died in a distant forest. In sum, Ponnivala’s male heroes have just two sets of tools, their horses and their swords. But their sister Tangal knows how to make use of everyday household objects, pets and cooking substances, lending her many, many action options.