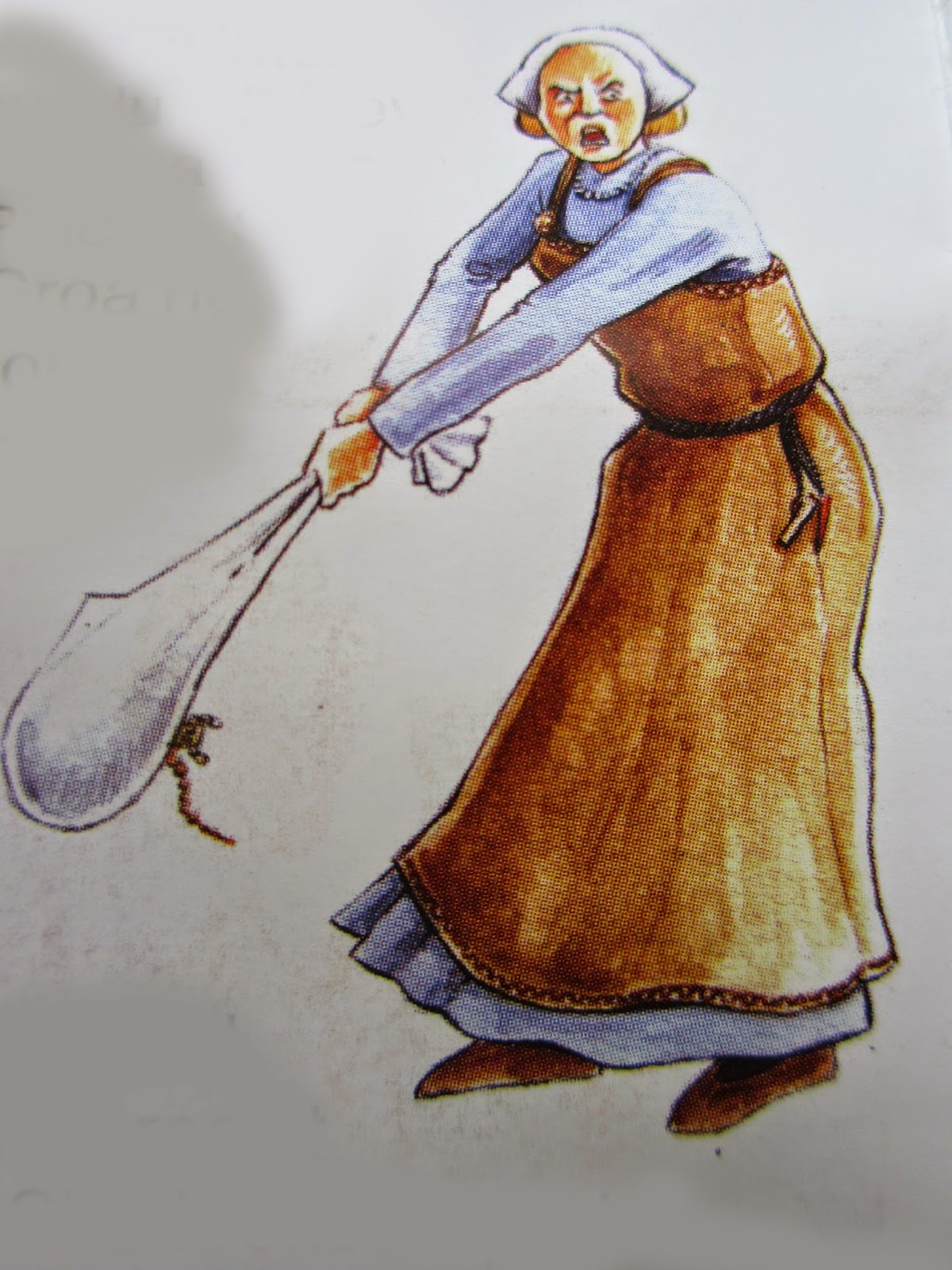 The negative powers of both heroes and heroines in the two epics being compared (one South Indian and one Icelandic) have already been mentioned in the preceding discussion. But here I discuss this material once more by taking a fresh perspective. In the Vatnsdaela story there are two striking examples of women able to act negatively on others from a distance. One sorceress contorts herself so as to place her head upside down and then she walks backwards. The other woman, seen in this image, walks counterclockwise around her home (the inauspicious way to circle something) while swinging a cloth full of gold. She also swings that cloth in a circle and her posture suggests that motion is counterclockwise as well. However, the majority of negative magic and cursing in the Vatnsdaela story appears to be planned by and carried out by men. 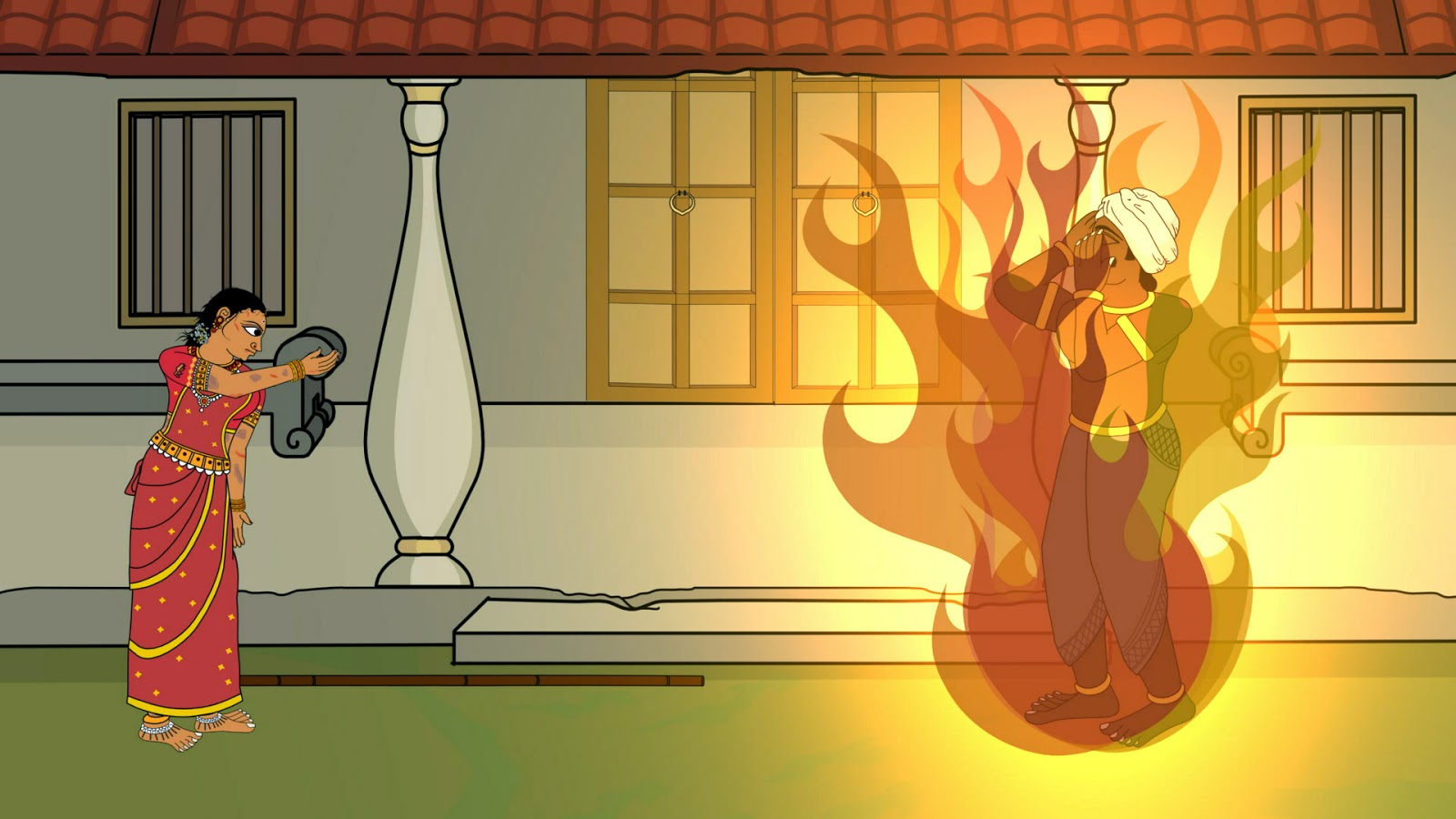 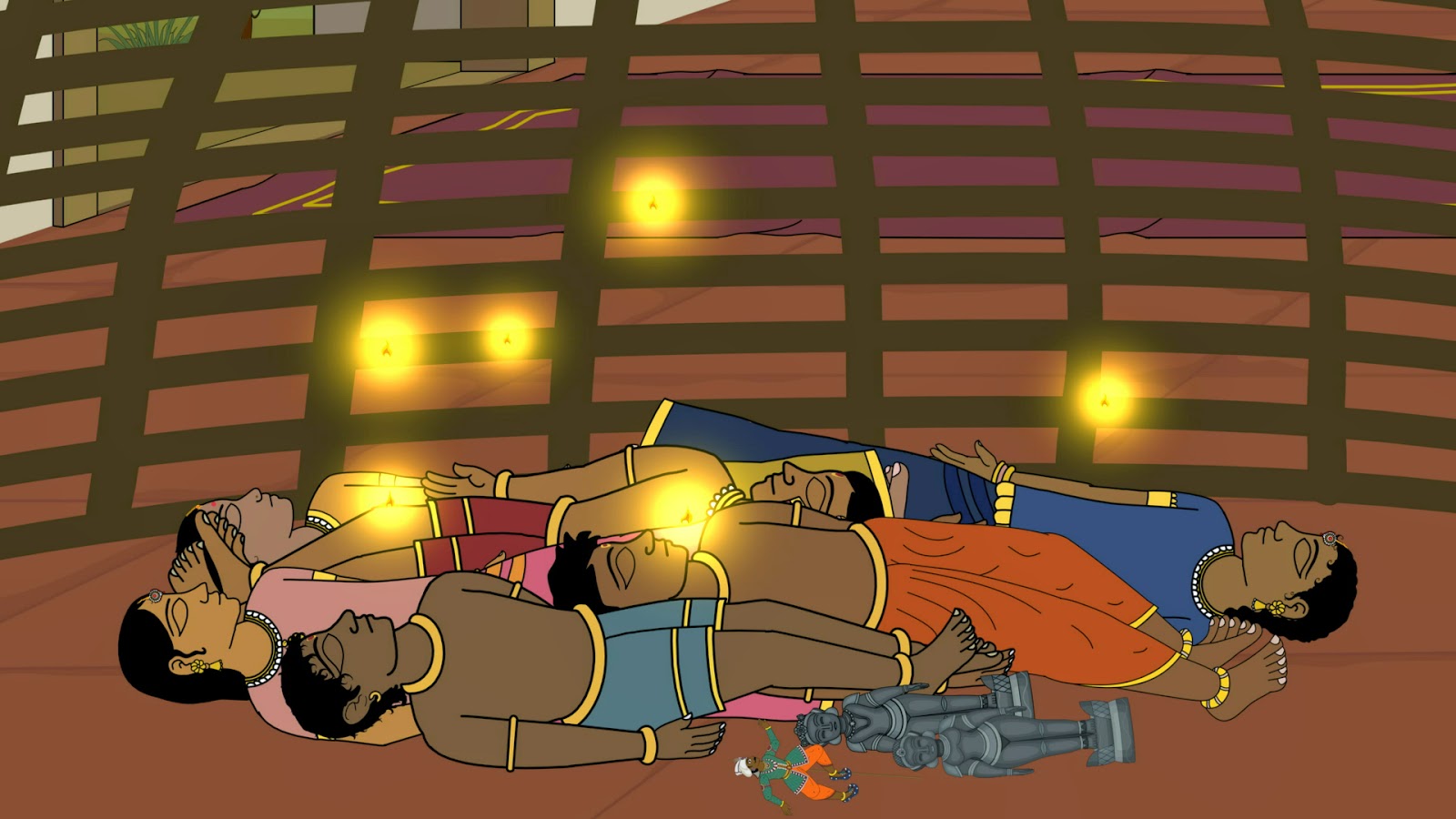 This contrasts with the Ponnivala legend where no human men are outward attributed with such powers (though there are male adversaries, of course, who try to accomplish negative things). By contrast, in the second image we see just one of many examples of a woman whose will to curse or burn. Here Tamarai has taken a fire ball and thrown it at her adversary, severely burning him. In the third image we see another horrific outcome of a married woman’s anger. Here the mother of the heroes has magically cursed and killed all of her brothers’ children. The picture shows their spirits rising upwards, as if their short lives are now headed for the heavens. 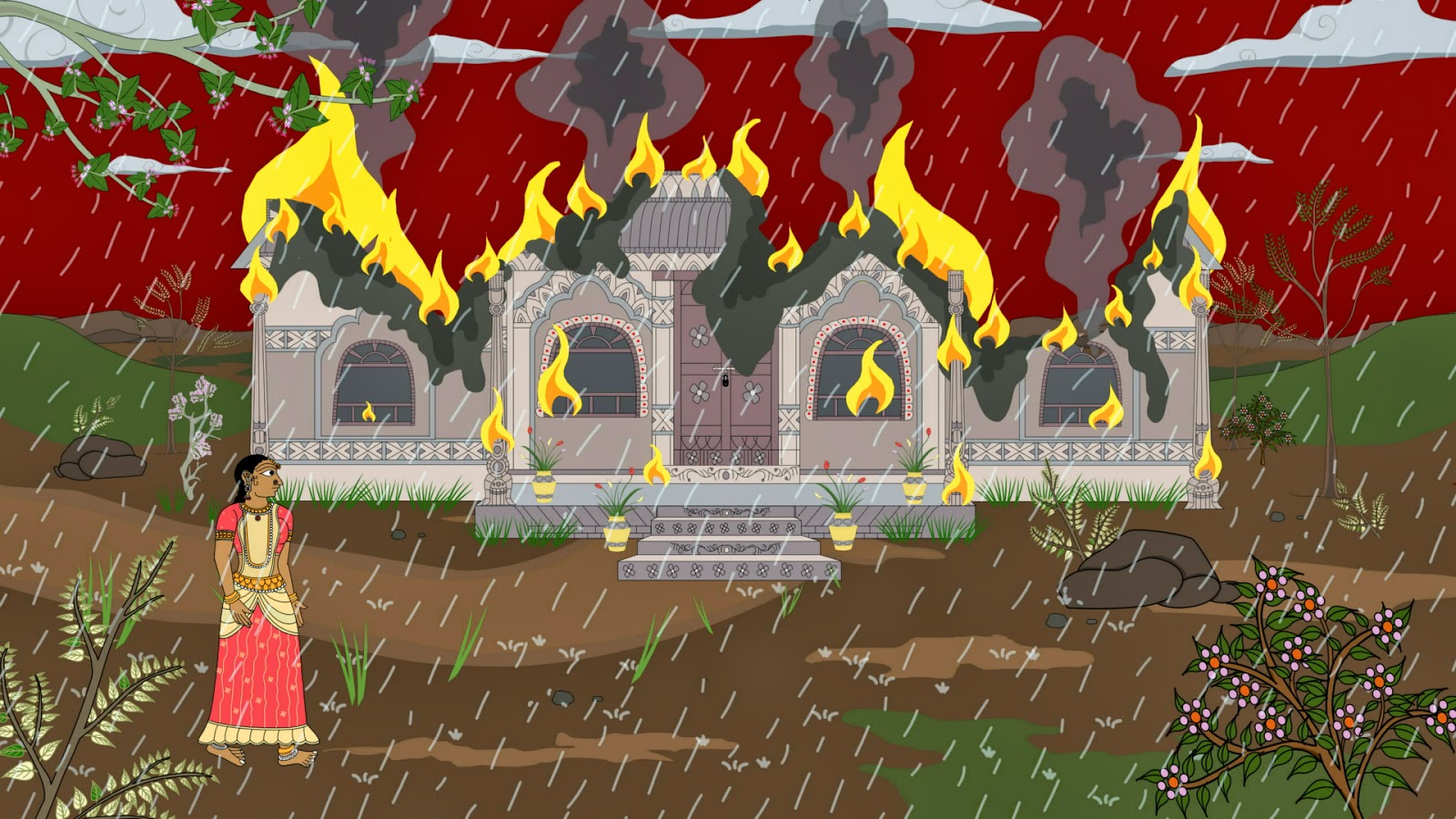 In the next generation the virgin young sister of the two teenaged Ponnivala heroes (Tangal) burns her sister-in-laws’ separate home with both these two women still inside! Tangal is angry because they have refused to attend their husbands’ funeral (they are her brothers). The women complain that these two men cruelly locked them away and never expressed any concern for them while they were alive. The two lonely brides die in the resulting fire she sets and Tangal has to carry their skeletal remains to the river nearby. 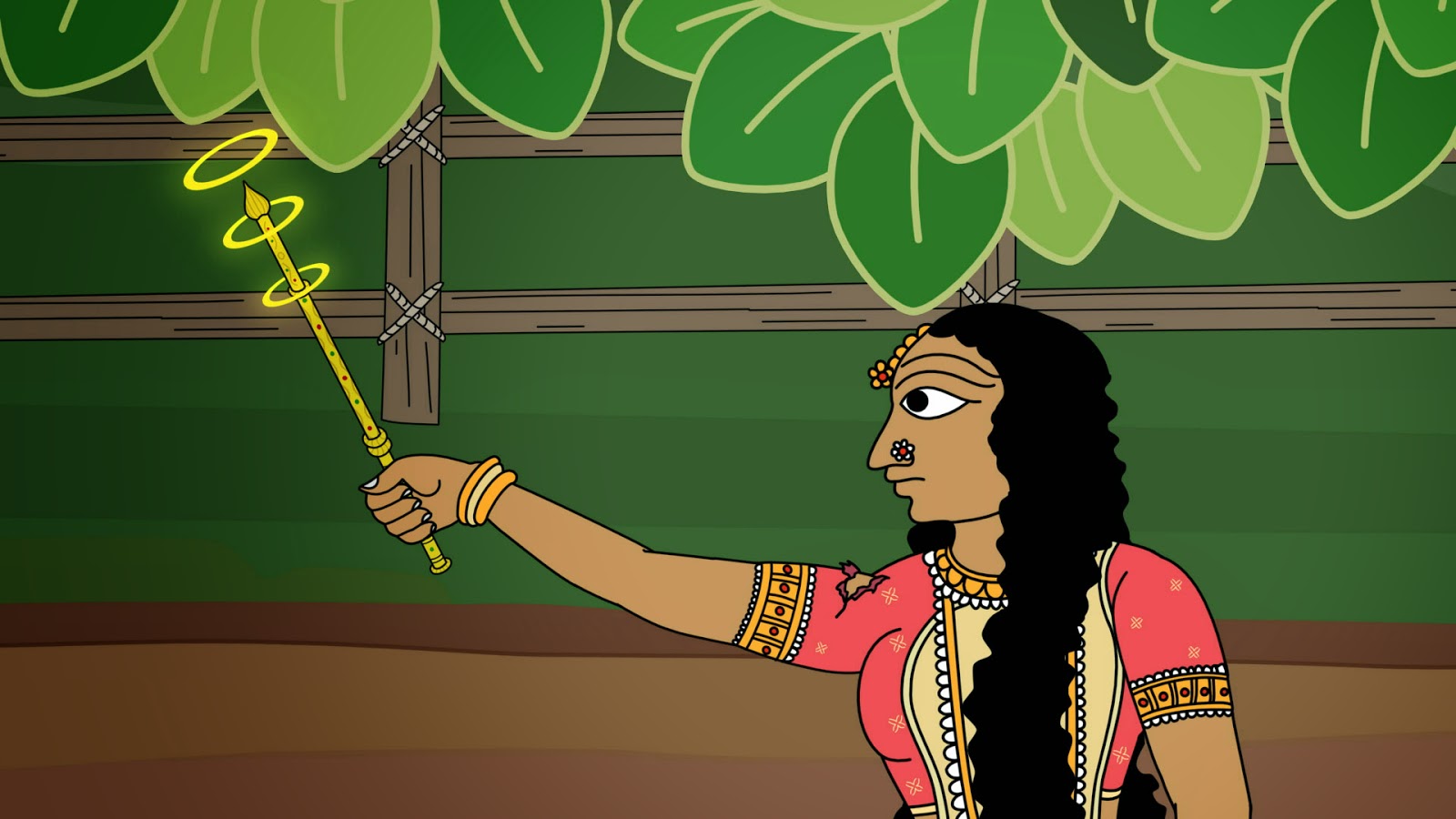 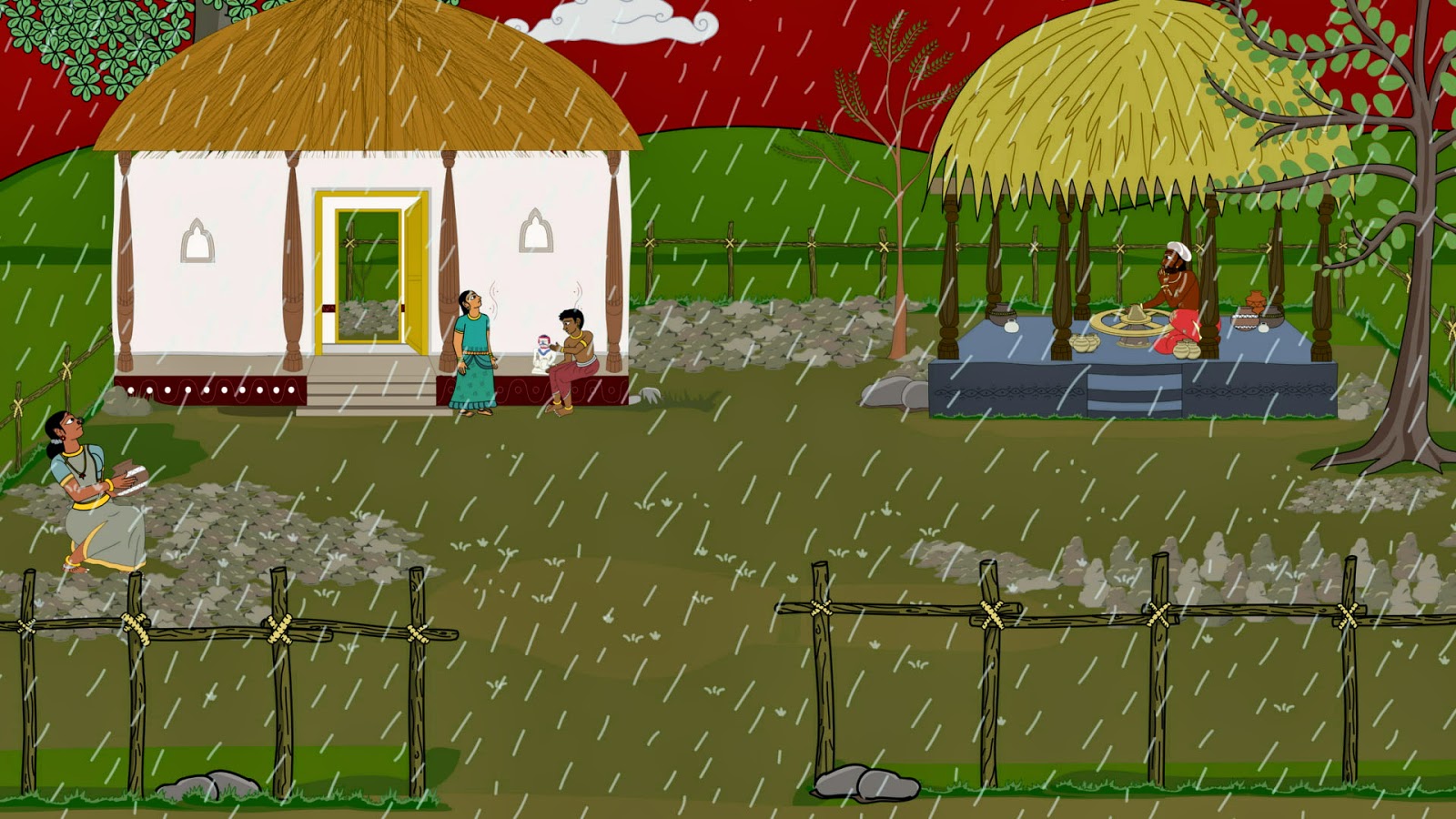 In the second picture Tangal uses her magic wand to curse a potter who refuses to give her the pots she needs for her brothers’ funeral rituals. No wonder he says no, as she is asking for them for free! In the final image in this sequence the poor potter looses al his beautiful (but as yet unfired pottery) in a deluge of rain Tangal’s wand magically creates.