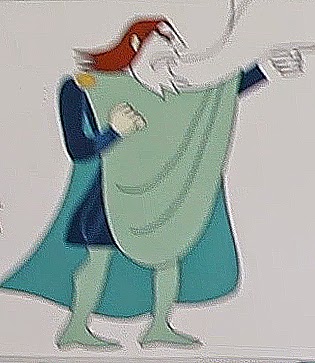 The Vatnsdaela Saga and The Legend of Ponnivala both feature a distinguished clan ancestor, a sort of “grandfather” figure. In the Icelandic case this is Thorstein (The Elder). We are told that this senior Thorstein was preceded by a named four-generation lineage of males said to have resided in Norway before him (Giant-Bjorn followed by Hrossbjorn, then by Orm Broken-shell and then Ketil the Large). But these are largely just names mentioned in passing. A few details are provided that describe Ketil, the last in line before the venerable senior Thorstein, as noble and wealthy man. But the real story begins with Thorstein The Elder himself. Thorstein is not a pioneer farmer and he never leaves Norway. However he is a brave man who sets out at age 18 to establish himself as a brave and honorable man. He soon kills a man who made himself wealthy by robbing others. He then gives the victim’s money back to the people. When he returns he receives fame and respect for his brave deed. Thorstein then goes on to marry the murdered man’s sister, a woman named Thordis. Interestingly, both Thorstein’s name and Thordis’ name repeat two generations later when these names are reused to label this couple’s first born male and female grandchildren. 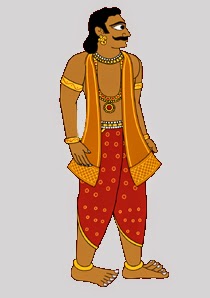 The parallel character in the Legend of Ponnivala is Kolatta, the pioneer grandfather. Instead of having a genealogical lineage of four preceding males, Kolatta is directly created by the goddess Parvati along with eight younger brothers. This gives him a different but equally “prestigious” status in this South India story. Kolatta does not go out and kill another man at age eighteen, but he does marry a woman (also created by the goddess) and at roughly the same age he enters Ponnivala as an immigrant with the plan to become a pioneer farmer there. He is opposed by previous sword-bearing residents. Instead of killing them (Kolatta has no sword) he bravely rises from the earth (symbolically positioned as its son) and we learn that because he is backed by Lord Vishnu, no sword can kill him. He goes on to adopt a son whose wife eventually bears the clan line several grandchildren. These children are not given his (and his wife’s) name(s). However, they are what is called cross-cousin grandchildren, a local Tamil tradition where two male clans consistently intermarry by giving women back and forth to each other over several generations. This is not “repeat naming” but a kind of social equivalent we can call “repeat intermarrying.” Kolatta also resembles Thorstein in that he is an honorable and sincere man despite the fact that he unintentionally kills several sacred cows at one point. Poor Kolatta builds a fence that whose sharp fence posts these innocent cows die on, believing they can jump over it. In sum, both Thorstein and Kolatta are responsible for a kill, though in different ways and within very different cultural frameworks. Both remain honorable men and become, as their two epic stories progress in parallel. Both die relatively natural deaths and each stands as a venerable clan forefather that later generations can look up to.

Ingimund is Thorstein’s only son and he becomes a main story hero. He matures early and is said to be handsome as well as very talented physically. As a child he goes to live with his father’s friend Ingjald where he shares adventures with Ingjald’s son. As a young man he leads the life of a Viking raider. This helps him to build his skills and self-confidence as a successful fighter and brave man.