In both the Vatnsdaela Saga and the Legend of Ponnivala there are stories about outsiders arriving and being resisted by those already living on land in the area. One Vatnsdaela example is a boat that lands near the hero’s homestead. It has a skipper called Hrafn. As leader and first man of the area Ingimund went to meet him as the ship docked. He politely offered to let the new guest stay in his home and Hrafn accepted. But it was also the custom that the first man to meet any ship could select from its wares whatever he fancied. Hrafn had a fine sword with him that Ingimund admired and which he asked to purchase. Hrafn refused and Ingimund nursed a feeling of insult. Sometime later the two men went into Ingimund’s nearby homestead shrine together. Ingimund went in first. Then he turned around and found Hrafn coming at him with his sword drawn. Ingimund was now doubly angered and said that no sword should be drawn inside a temple. He then asked that Hrafn hand over his sword to pay amends to the gods. Hrafn did this and soon afterwards he left the area for good. The fine sword became treasured by Ingimund and was later handed down to his two sons and then on to their descendants. (Note that Kolatta and Kunnutaiya worshipped at similar shrines near their homes. Kolatta’s temple was dedicated to his own family goddess – Celatta. No other information and no image of Ingumund’s family temple was available to me (at the time of writing this blog). 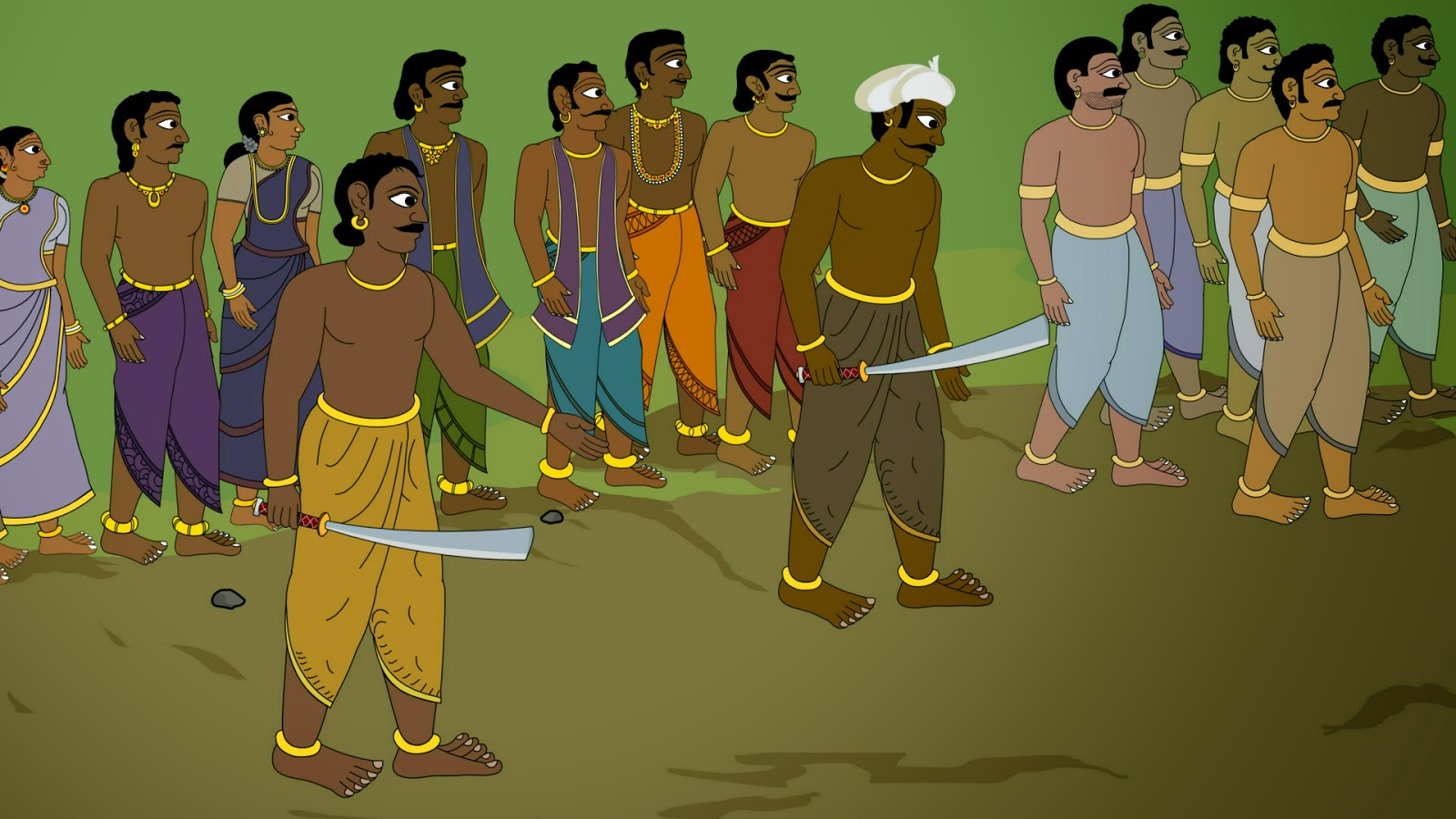 There is a somewhat similar but inverted set of stories about Kolatta and his grandsons that, like the above, involves swords. Again there is an outsider/insider confrontation but in Ponnivala the artisans are the first settlers and they have the swords. Kolatta is the newcomer and has arrived without this important tool. The artisans resist Kolatta’s announcement that he is going to plough “their” lands as a skilled farmer. They then proceed to throw their swords at him in an attempt to behead the newcomer. 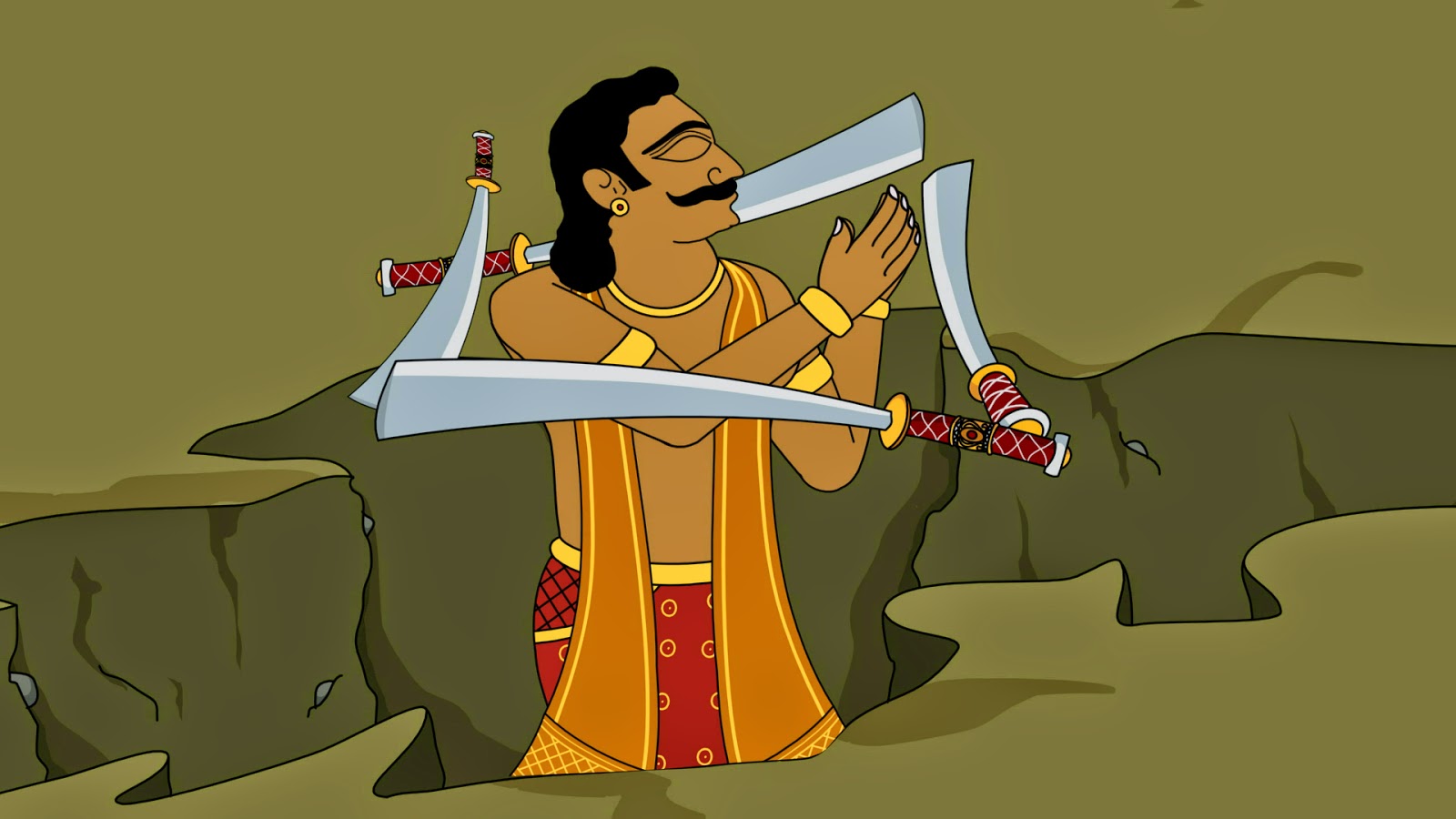 Vishnu then steps into the scene (unseen in the image used) and sees to it that the artisans’ swords are ineffective. Kolatta lives and the physical confrontation ends, at least for some time. 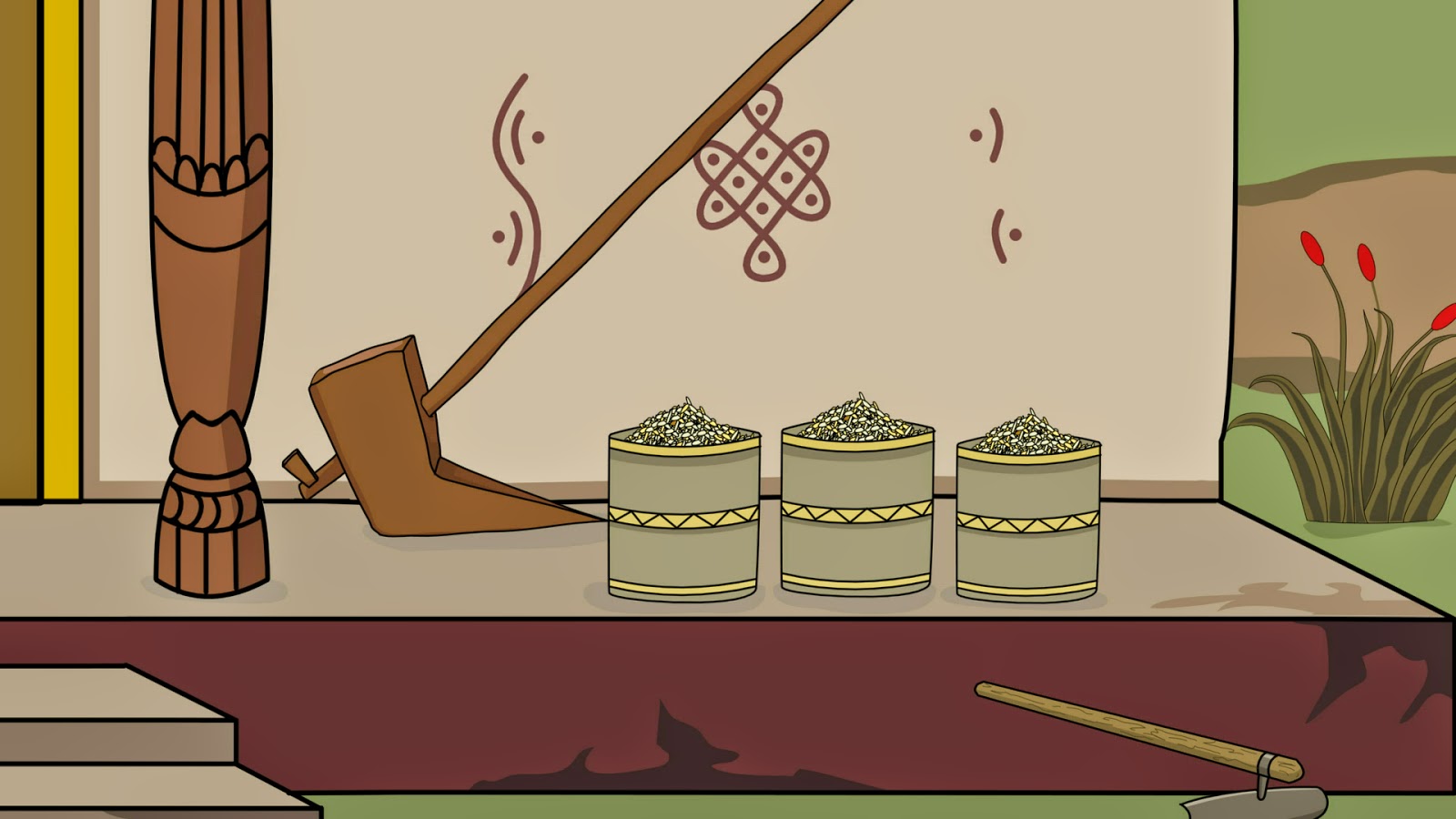 Furthermore, as a result of Vishnu’s divine intervention a social contract formulated. The great Lord announces the terms: The newcomers will be awarded the right to plow the lands of Ponnivala, but every time an artisan makes a plough for them to use the craftsman responsible will receive three handsome measures of grain. There is no social contract mentioned in the Icelandic case. However, soon after a key moment where Berg insults Thorstein at a wedding and Thorstein’s younger brother Jokul then tries to even things out by launching a reciprocal attack on Berg. The two are separated but Berg then raises the matter later in a public forum at the Hunavan Assembly. A decision is reached. Jokul is to lower himself before Berg by crawling under a mossy arch (see an image of this in this same blog segment). This public announcement of a resolution somewhat resembles Vishnu’s to the gathered Ponnivala crowd that there will now be a set of payment rules detailing what a farmer must pay an artisan for any completed work delivered (a new plough, for example). Jokul refuses to crawl under the arch so Thorstein, his elder brother, steps in to replace him. Apparently one brother could “replace” another in settling a matter like this.

In sum, in the South Indian epic the causes of social tension differ from those described by the Icelandic story to some extent. In the Ponnivala tale we see mostly group-to-group confrontations. Most of these concern a dispute between the representatives of the three contrastive modes of production described there (artisans, hunters and farmers). The Icelandic story is more focused on personal confrontations between evil doers and those upholding what is presented as “right” or moral behavior. There the heroes oppose sorcery, theft, and personally insulting behaviour). In this sense we can say that the Ponnivala story has the stronger “sociological” perspective, perhaps due to the presence of a denser population and more highly evolved local economy in the area during the period depicted. In part two of this segment, however, we will look below the surface and notice that the artisans versus farmers is a common underlying theme that does appear to be present in the Icelandic case as well. 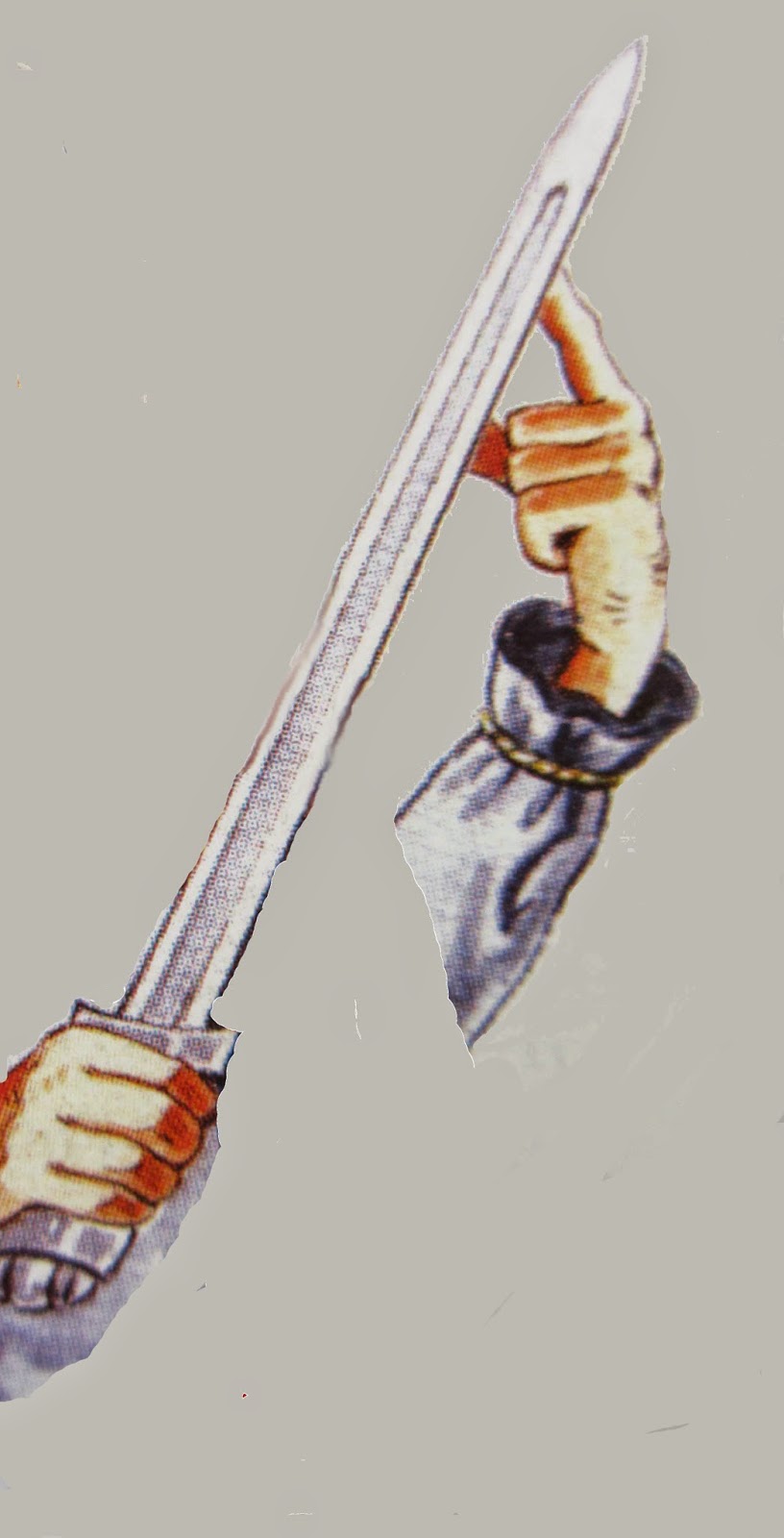 It seems fair to say that in the Vatnsdaela Saga the owner of the finest sword (and perhaps also the most magical one) makes the rules. Some kind of divine backing may also be implied by the presence of a temple near Ingimund’s home, but this theme is not well developed. We can be sure that this finest of swords, Aettartangi, came from an outsider, a somewhat intrusive guest who seems to have had other fine goods on his ship as well. This is relevant because of the hint that this visitor had artisan or merchant connections. Clearly the sword’s original owner was not a farmer. Later, in Part Two of this segment I will revisit this probable confrontation between a merchant-artisan and a hero-landowner. (Image 6) This image extends the theme of divine backing. In the Ponnivala case, as one further example, Kunnutaiya and his wife turn to Lord Vishnu for advice before deciding exactly where to locate their new palace. Indeed, Vishnu’s backing of the Ponnivala family is seen repeatedly, right through the story. Interestingly, however, Lord Vishnu switches sides and supports these landowners’ hunter enemies when it really counts, at the very end of the tale (a reversal too complex to discuss further here). 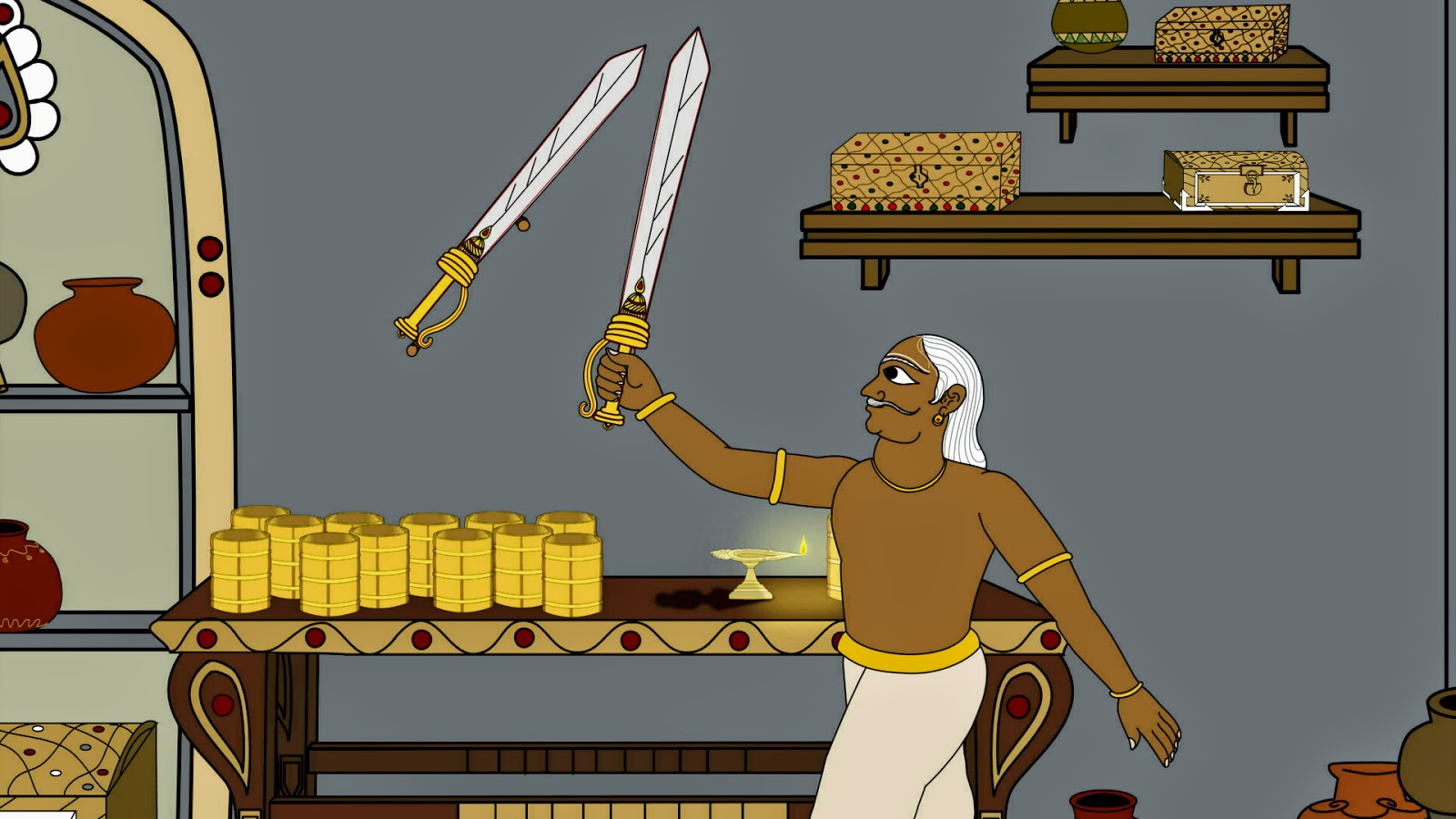 In the Legend of Ponnivala’s third generation Kolatta’s grandsons have fine swords though we are not told exactly how they acquired them. This South Indian story also exhibits more continuity in terms of the long list of adversaries family heroes must face. And grudges last longer. Now the artisans, who were the area’s original inhabitants, continue to hold a grudge against the farmers for three generations. In this image one artisan tries to steal a sword from Kolatta’s grandsons by sneaking into a palace storeroom where their family weapons are kept. But the heavy instrument slips in the thief’s hands and cuts him instead. 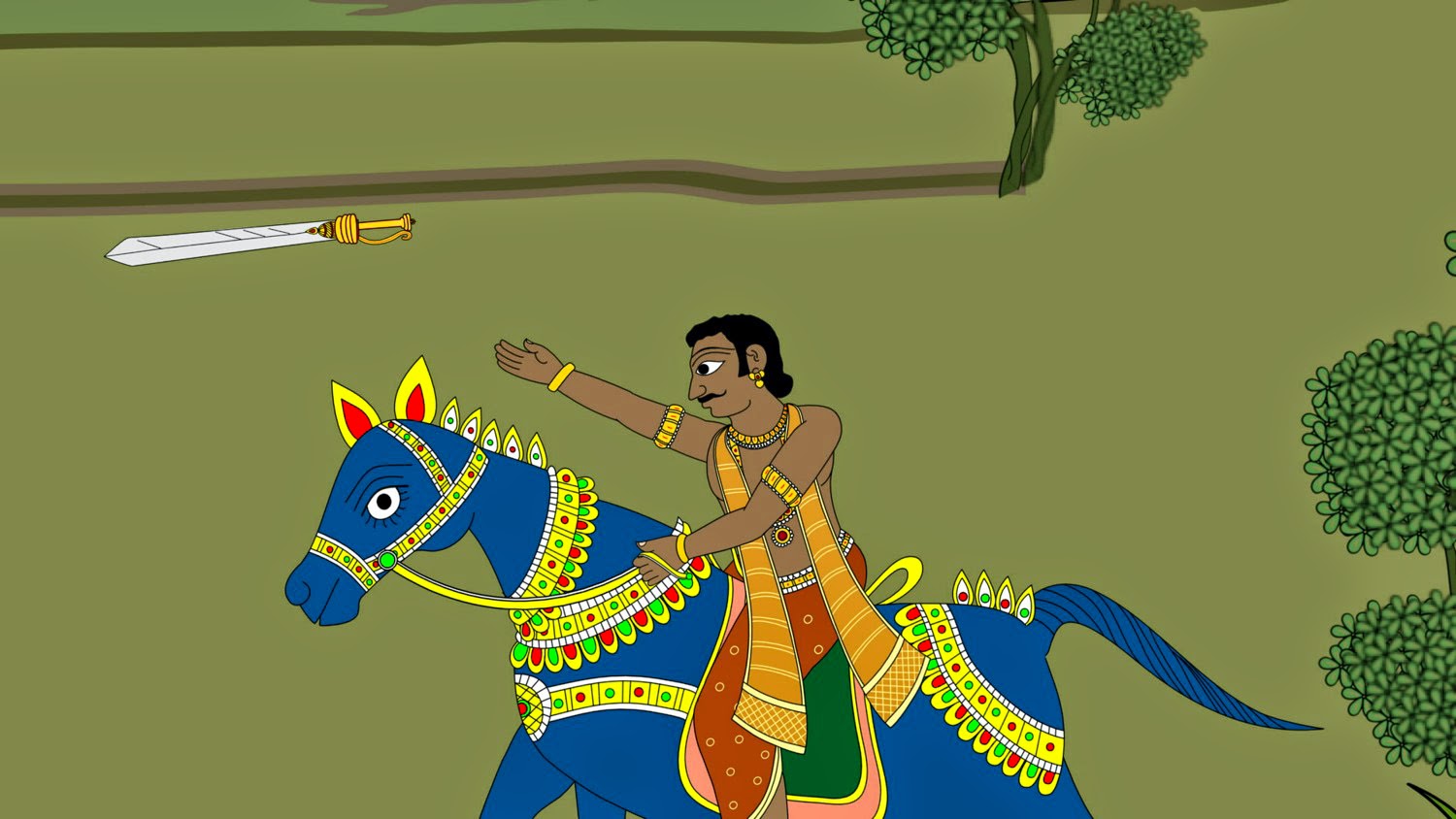 Skipping a few in-between events, the confrontation ends when one grandson, Shankar, arrives on horseback, rescues his brother and beheads the thief with exactly the same tool this man had earlier tried to steal!